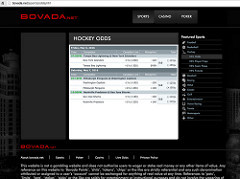 Each year, Canadians wager an estimated billion on offshore sports books located in Antigua, Gibraltar, the Isle of Man or the United Kingdom, said Paul Burns, vice president of the Canadian Gaming Association. “In contrast, they spend about 0 million on provincial sports lottery games,” like Ontario’s Pro-Line. Yet the Canadian government does nothing to regulate online sports betting or collect taxes from it.

The reason bookmakers and bettors essentially can operate freely is because sports betting technically is not illegal in Canada. Attorney Michael Lipton, a gaming law expert at Dickinson Wright in Toronto, said, “There have been no prosecutions that resulted in convictions or guilty pleas, so the offshore sports books look at Canada as a gray zone.”

He noted each province oversees gambling in its territory, so the hundreds of websites offering casino and sports betting to Canadians exist beyond the provinces’ jurisdictions.

In addition, the Canadian criminal code offers little in the way of guidance regarding gambling. Attorney Chad Finkelstein, a noted gaming law expert, said, “The criminal code was written decades ago, and these provisions with respect to gaming were drafted in the 1960s and haven’t really been updated since. These provisions were not drafted with anything remotely resembling the internet ever contemplated. So we have outdated, antiquated provisions, which makes it difficult to apply to a modern gaming business.”

Bettors can deposit and withdraw money through online betting accounts using major credit cards or via their accounts with large Canadian banks. In a statement, the Canadian Banking Association noted, “Laws vary by province but, in general, many forms of online gaming are legal in Canada. Banks do reserve the right to prevent transactions if they believe that the client is using the account for illegal or fraudulent purposes.””

Lipton noted regulating online sports betting could provide “a very large source of potential revenue for the government. At the same time, it also highlights the fact that the existing regulatory framework does not work anymore, and it’s about goddamn time the government looks at this and thinks about how they can change it.”