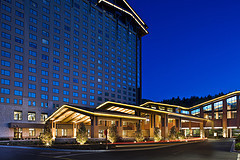 Caesars Entertainment and the Eastern Band of Cherokee Nation signed a seven-year extension of Caesars’ management agreement for the Harrah’s Cherokee Casino & Hotel at an event celebrating the completion of the first phase of the casino’s 0 million expansion project. The tribal council approved the project in 2007 when the property was 10 years old.

However, some wonder whether the expansion is a good idea given that casino distributions to tribe members are down 16 percent, and the tribe faces $1 billion in debt. The expansion at Harrah’s is responsible for about 60 percent of that, with the rest attributable to a new school complex and emergency operations center.

The issue is becoming political as candidates in the July 8 primary for principal and vice chief explain how they’d diversify to locate other sources of income for the tribe—although Harrah’s Cherokee provides 87 percent of its income, with half of the proceeds going to tribe members and the rest funding tribal operations and programs. Candidates are touting tribal stores, eco-tourism and other ways to reduce the tribe’s dependence on Harrah’s revenue.

Most of the debt accumulated during the tenure of sitting Principal Chief Michell Hicks, who has held the office for eight years. He said he has a plan to completely remove the debt in the next four years, so the tribe would be debt-free when he left office. He has not provided specifics other than to say, “As we roll through and increase the expansion, addressing the debt is going to be done through the cash flow. If you look at the things that we put on the ground, in my mind, that’s not spending money; it’s investing in our future. We’re making the services better; we’re making sure that jobs stay intact.”

The tribe also continues to lobby Governor Bev Perdue to allow live card dealers at the casino rather than permitting only electronic gambling. Though the governor has been receptive, a video poker company has filed lawsuits claiming the governor does not have the right to negotiate with the tribe and that it is illegal to allow video gambling at the casino and nowhere else in North Carolina.