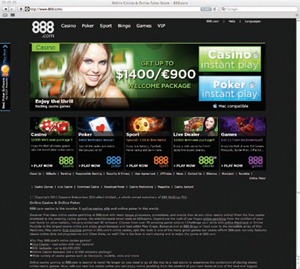 Caesars Entertainment, the world’s largest operator of land-based casinos, is acting to expand its presence in the online gaming world.

Founded less than two years ago by Uri Shahak (the son of former IDF Chief of Staff Amnon Lipkin-Shahak) and gaming expert Robert Antokol, Playtika is one of the web’s fastest-growing companies. Based in Israel, Playtika offers two social media games: Slotomania, which is a slot game; and Farkle, which is a game of dice. Playtika currently has 10 million unique users every month, half of whom are Facebook users. In contrast with Zynga, the company also markets its games on the Russian Facebook equivalent, V kontakte.

Playtika’s casino slant may have been appealing to Caesars as the company eyes the future of internet gaming. Caesars acquired 51 percent of Playtika at a company value of $80 million-$90 million last May, and has acted on its option to buy all shares within two years.

Last month, Caesars expanded its business-to-business licensing deal with Dragonfish, the B2B arm of online casino operator 888, to include the U.S. Dragonfish has a deal with the Caesars Interactive Division to use the operator’s World Series of Poker brand in its online casinos. The new arrangement means the WSOP brand will appear in U.S. internet poker sites, beginning in Nevada, where 888 has already applied for an operator license, and elsewhere following implementation of online poker in other states.

“888 has been successfully driving the World Series of Poker brand in the U.K. for the past three years, and with current momentum toward either a federal or state-by-state regulatory environment, 888 is uniquely positioned to support either outcome, without delay,” said Mitch Garber, CEO of Caesars Interactive Entertainment, in a press release.

Meanwhile, in a separate announcement, Caesars revealed it has signed a deal with LB Poker, the online poker division of French casino operator Groupe Lucien Barrière, to use the LB poker platform in a joint effort to build a proprietary online poker platform. The new platform would be used first in France, but then internationally.