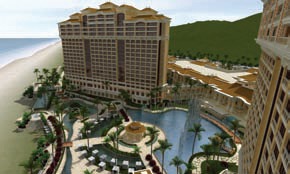 The property is still under construction, but MGM Resorts last month pulled out of a management agreement it had negotiated with Asian Coast Development, a Canadian company that owns 75 percent of the project, to manage the first phase of the project. The other 25 percent is owned by Pinnacle Entertainment, by virtue of a $108 million investment the U.S. regional casino operator made in Ho Tram last year.

ACDL CEO Lloyd Nathan said phase one of the project is ready, and that it will open “in 2013.” Previous statements from the company said it would open in the first quarter of this year.

“We thank MGM for its assistance in the hiring and training of our 2,000-strong team of Vietnamese hospitality professionals,” said Nathan. “We are delighted that we have completed the construction of the first phase of our first resort. It includes 541 five-star rooms and suites, nine world-class restaurants, gaming facilities, convention and meeting space, luxury retail, bars, an ultra-lounge, a spa, three swimming pools, beach facilities, and other leisure amenities. ACDL is also currently constructing Tower 2 of the first resort, which will add an additional 559 five-star rooms and suites. In addition, it is constructing an 18-hole Greg Norman-designed championship golf course.”

All is not well with the property, however. A problem was ACDL’s failure to obtain an investment certificate signed by the government. This was also cited by Pinnacle when it wrote off $25 million of its total investment in the fourth quarter of 2012, when banks suspended a $175 million credit facility.

The MGM departure is a big blow to the Ho Tram project because MGM was planning to send some of its VIPs from Macau to the Vietnam integrated resort. Without MGM, ACDL will have to deal directly with the VIP operators, something they will do with much less leverage.