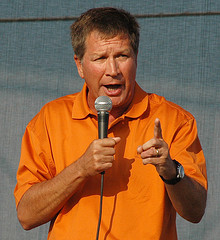 Ohio Governor John Kasich reached an agreement last month with Penn National Gaming and Rock Ohio Caesars whereby the developers of the state’s four regional casinos will pay 0 million more over the next 10 years to the state, making the “raw deal” that Kasich called what the voters approved in 2009 less raw.

The governor declared, “I believe that the agreement we have with Rock will benefit the citizens of the state of Ohio. I’m also pleased that Rock’s going to be able to get about their business, we want them to be successful and yes I’m very satisfied with where we are.”

The governor also plans for the state to profit from the introduction of up to 17,500 slot machines at the state’s seven racetracks. That combined with his deal with Rock Ohio Caesars could raise an additional $900 million annually for the state, he claims.

The additional money that Kasich was able to squeeze from the two developers shows that the governor wasn’t wasting his time when he criticized the original tax structure. Part of the deal struck allows Rock Gaming to buy part interest in one of the racetracks, Thistledown, which its partner, Caesars Entertainment, owns.

In May Rock Ohio Caesars announced that construction had halted at the Horseshoe Casino Cincinnati and the Horseshoe Casino Cleveland in reaction to a state budget that include a provision for calculating the casino’s Commercial Activity Tax (CAT) that taxed all the money that was bet, instead of the actual profits.

At the joint press conference announcing the settlement, Dan Gilbert, the lead partner in Rock Ohio Caesars, said that he stopped construction because he needed to know the bottom line on costs before proceeding.

Kasich agreed to calculate CAT on the casino’s actual revenues in return for the extra $10 million–$12 million a year. That is in addition to the 33 percent tax on revenues and $50 million one-time licensing fees that the amendment to the state constitution mandates for each casino.

This clears the path for the casinos in Cleveland and Cincinnati, including Phase I of the Horseshoe Casino Cleveland to continue construction, which has been halted for several weeks.  The Cleveland casino is projected to open early in 2012, however the Cincinnati casino may be delayed longer because the developer cancelled a steel order during the delays and it will take awhile to reinstate the order.

Penn National Gaming never stopped construction on its Toledo casino, which should be the first to open sometime next year. The company also reached an agreement with Columbus that will permit full-scale construction to continue at that site.