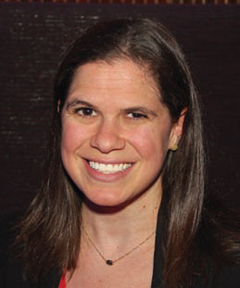 Brett Abarbanel is director of research for the University of Nevada, Las Vegas International Gaming Institute, joining the college almost a year ago. Since then, she’s concentrated on eSports and what it may mean to the casino industry. She’s a graduate of UNLV who spent some time doing gaming research at UCLA before returning to her alma mater. She’s also a serious poker player. She met with GGB Publisher Roger Gros at her offices at the IGI in March.

GGB: You’ve been concentrating on the eSports discipline since you joined the UNLV International Gaming Institute last year. How did you get into that?

Brett Abarbanel: I’ve been doing that for a very long time. Decades actually, but casually. I’ve never played that frequently, mostly because of time constraints. As fun as it is, I simply am not 8 years old anymore, so I just don’t have the time. And as I was playing, my husband actually plays quite a lot of video games, and I was noticing that gambling kept sort of cropping up in all of these, even if it was in just a simple RNG function in World of Warcraft, where you can bet on random games with coins of value.

So, this kept cropping up, and we started seeing, as these tournaments were getting more and more popular, the sport was starting to become legitimized. And it’s fairly established, sociologically speaking, and as something becomes more and more mainstream and acknowledged, we generally see gambling on it. And once I started seeing that coming up around January or February 2014, I really started paying attention to how the two were merging together. And previously, I’d been doing a fair amount of research in online gambling, and that’s a lot of the gambling that you see in this space. And so, the transition to include videos games and competitive video games, eSports into that, was fairly natural. It also allows me to play video games at work and have it actually be work, so that’s always a nice bonus.

What does eSports mean for the gaming industry?

We still seem to be in the somewhat preliminary stages. We’re certainly farther along than we were when I first started looking at this a couple of years ago. We’ve had initial interest, I think, in many of the tournament events. Last spring, Mandalay Bay brought in the League of Legends Championship Series. Since then, we’d had major eSports events in Las Vegas, but this really seemed to be the major catalyst for change, in terms of bringing in major events.

But we’ve also seen other applications of eSports. So, usually when we talk about eSports, we are specifically referring to competitive video gaming. This is the professional stage of video gaming. And then, in some cases, we also have used it to refer to amateur competitions as well. The eSports Lounge at the Downtown Grand is one of the manifestations of eSports that we’ve seen. Then we also have Level Up over at MGM Grand, and that also is a slightly different iteration of the gaming space, but I’m not sure I would call it “eSports space.”

You recently formed an organization dedicated to the growth of eSports in Nevada. Tell us about that.

Seth Schorr (chairman of the Downtown Grand) and I have been talking about this now for about a year: How does eSports look in the gambling world? Narus Advisors’ Chris Grove came in. We both like him very much. And then, Jennifer Roberts, my colleague here at the IGI, is the associate director of the International Center for Gaming Regulation.

And so, the four of us have been having meetings for about eight months or so. The eSports world, as quickly growing as it is, and as huge it is, as much interest as there is, it’s still fairly fragmented. There are a number of different developers.

It’s unlike traditional sports, in the sense that nobody owns football. The National Football League runs a league for football, but so does the Canadian Football League. And football exists in many different forms. You and I could go down to the park right now and throw a football around, and nobody’s stopping us from doing that.

But if we wanted to sit down and play a game of League of Legends together, we would have to pay for that. That game belongs to Riot Games. So, that’s one of the ways in which it’s fragmented. It’s not necessarily a bad thing; it’s just that the proprietary nature of these games means that there are different segments who have different interests—and that’s just in the game development component.

We also have different tournament organizers who are trying to put together their own tournaments, we have different teams, and there’s no formal league like there is with the NFL. There are a number of different leagues. So, it’s almost as though we have NFL 1, 2, 3, 4, 5—some of course with more prestige than others.

And why the focus on Nevada?

This is a state that has a very large established tourism infrastructure. Las Vegas is not just gambling; it’s a major tourist destination, and at the Las Vegas Convention and Visitors Authority, we can back that up with about a thousand different data points. Las Vegas has the capability to bring in these types of events.

And then as far as the gambling component goes, Nevada has one of the highest standards of gambling regulation in the world. We see Nevada as having the opportunity to be a major hub for eSports. It’s a global phenomenon, this eSports thing, and we’re trying to establish Nevada’s place in that global network.