John Acres is back with a new toolbox for casino operators 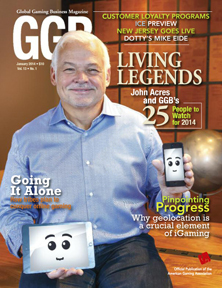 To call John Acres a visionary is almost like damning with faint praise. For the man who invented player tracking, advanced progressive jackpot systems and bonusing, visionary might not be strong enough.

And those inventions also weren’t enough for Acres himself, who has founded and sold several innovative gaming suppliers, EDT, Mikohn and Acres Gaming. He launched Acres 4.0 in 2007 “to reinvent casino gaming because bureaucracy, regulation and the ease of past success have so tainted our industry’s ability to adapt that we no longer attract hearts, minds and wallets of younger consumers who are essential to continued growth,” he says.

“Consider bookstores and horse racing,” he continues. “They were both once highly profitable with wide customer appeal. Today, both are obsolete. If gambling doesn’t adapt to changing consumer desires, we’ll be obsolete, too.”

Acres believes that the customer experience is key.

“Customers want fast service and personal recognition, in addition to affordable, entertaining chances to win,” he says. “Younger players were brought up with video games, home computers and the internet. They expect far greater interactivity than we provide.”

While Acres 4.0 has designed mobile gaming technology currently in use by charitable organizations at bars and restaurants in Minnesota, as well as in various Indian casinos across the U.S., Acres says he’s focusing on improving the customer experience in casino resorts.

“Today’s regulations and traditions are so entrenched that it will take a long while to convert traditional gambling experiences into games with greater interactivity and socialization as our younger generations desire,” he says. “And we still have a number of players that, although aging, still like traditional gambling games. So we decided to first focus on improving the immediacy, mobility, instruction and information with which customer services are delivered.”

“Several years ago we noticed the incredible proliferation of mobile devices,” he explains. “Something like 1.3 billion smart phones will be sold in 2013. We also realized just how inefficient traditional two-way radios are in allowing casino employees to communicate. So we started building an automated dispatch system that could eliminate those old two-way radios with mobile devices. We originally called the product ‘Satisfaction Express’ because it was intended to improve player satisfaction.”

As they developed the technology, though, Acres realized they could create an entire management system that could simultaneously embody standard rules of conduct and empower employees to deliver more rapid, more personalized service.

“The further we went down this development path, the more we realized it was about personality and emotional gratification, not about technology,” Acres adds. “So in early 2013 we decided to embrace the emotional, personal nature of customer service and renamed our product Kai.”

The name was taken from a Japanese term, Kaizen, which means “good change” and describes a manufacturing management technique that transformed Japan’s devastated postwar society into one of the world’s great economies.

“While Kai had similarities to Kaizen, we thought it important that Kai be viewed not as a technology but as a person, because we wanted to remind ourselves that customers—and employees—are people,” Acres explains. “We believed that giving an employee clear direction, instruction and information could empower them to provide great service.

“For example, suppose Tim Smith is playing on machine B741 and encounters a bill jam. Kai instantly senses that jam and searches through his database of all employees on duty for the best-qualified, available person to assign that task to. In this case, that employee’s name is Jason Jones.

“Now Jason, like all employees who work with Kai, wears a wireless earpiece that’s connected to his wrist-mounted mobile device that runs Kai’s software. When Kai calls, Jason hears a beep and looks down at his screen to learn there is a bill jam on machine B741 and the player is Mr. Tim Smith, a gold-level player.

“Jason immediately heads over to the location and says, ‘Hello Mr. Smith. I see you have a bill jam. Let me fix that and you’ll be back to playing in no time.’ Kai handles all the paperwork for Jason and lets him escalate the call if additional help is required.

“Through this automated, more efficient and personalized service process, Kai cuts response times by 20 percent or more alone, while also saving thousands of dollars in labor costs. But Kai’s real benefit is improving the player’s experience.”

But the slot floor isn’t the only place Kai has applications. He’s already grown to provide drink service support for beverage servers and will soon extend support to security, hotel, surveillance, housekeeping and any other place where two-way radios are now used.

Acres says Kai will also grow to interact directly with players, allowing them to text for drinks, restaurant reservations and even to retrieve a car from valet.

“We initially worried that employees would resent taking work assignments from an automated personality, but we’ve found exactly the opposite to be true,” says Acres. “Workers are glad to be relieved of listening to radio traffic all day, and they like getting concise work assignments that allow them to truly please players.”

Fixing The Hole
Acres says he is genuinely concerned about the fall-off in revenue on the casino floor. While money might also be spent in the non-gaming areas of the casino resort, he says without a solid foundation of gaming revenue, we’ll never see the number of massive casino resort projects that were characteristic of the 1990s and 2000s. He suggests a paradigm change.

“There have always been three shares that have been important to any business. There’s money share, there’s market share, and there’s mind share. And the tradition, whether it be a casino, or a supplier, or any other business, has been to start small, build money share, find a place where you can be profitable, take those profits and reinvest them, build up more customers until you have a market share, and ultimately, that market share results in a mind share where people recognize you.”

“About 20 years ago, that got flipped upside down, by the internet,” he explains. “It became mind share first, then market share, then money share at the end. Look at Google, for example. They opened up with just a box on a browser screen. You could type in anything you want, and find websites that related to your interests. They charged nothing to use Google, even though it was an incredibly valuable service. And for the first couple of years, they didn’t even run ads. They wanted to create a mind share of how to find information. And indeed, they did it so well, that Google is now a verb.

“At great cost, they created a mind share and built from it a very loyal following: a market share, even though no money was collected. When they had sufficient market share, they went to money share by running ads. And that money is incredible. Look at Google in the past year—the amount that their stock price has risen has increased their market cap value. And just that increase in value of Google within the last year exceeds the total value of all of the publicly traded gaming companies on Earth combined.”

Casinos, says Acres, are going to have to adopt that “mind share” model if they want to attract that next generation.

“If I was running a casino, I would really seriously think about changing my games on the casino floor so that they are available to play for free, so that people can sit down and experience those games without risk,” he says. “I can sit down and play this brand new game, and exercise it without investing any money. After a while a message appears saying, ‘You can actually win these jackpots. Press here to wager with real money.’ You’ve got to get that mind share first. You’ve got to get that person to engage. All of the other recreations consumers engage in are doing this, and we should too.”

People do the math, says Acres, consciously or unconsciously, so appealing to them with some play-for-free games might keep them in the house.

“You’re challenging them to put up a lot of money,” he says. “If I put a $20 bill in the machine and it’s gone in three minutes, I realize that this is going to cost me $400 an hour. I make $60,000 a year, so I can’t afford this. I’m out of here. But if we gave them that chance to play for free, they would understand that the game goes in cycles, with periods of wins and periods of losses. If we don’t change that mindset, we’re dead.”

Open Opportunities
Acres says he’s pessimistic about future opportunities in gaming, but that’s only because most markets are flat or depressed.

“The only place there are opportunities is where there’s a growing market,” he explains. “With 11,000 fewer slot machines on the Strip than there were five years ago, our market is, at best, stable, and at worst, shrinking. Now it becomes all about cost savings.

“But when I started, all the opportunity was there. That was a tremendously exciting thing. They would say, ‘Hey kid, what can you do? Give this a shot.’ And if it worked, then you got another shot. Well, there’s nobody giving shots right now.

“If I’m a new college, or even high school graduate, I’d rather go and create an experience on Facebook where I can be in business tomorrow. I wouldn’t go to that old fuddy-duddy casino industry, and work through the regulations and the traditions, and all of the obstacles that they put in my way. It’s not even a choice. I’ll go to the internet, where my friends are, and where there’s true opportunity. If we don’t provide opportunity to bright young minds, we won’t have any innovation in our industry.”

Part of the problem, says Acres, is the ponderous regulations that strangle gaming industry innovation. He believes there needs to be a partnership between operators, manufacturers and regulators to ease these burdens.

“We’ve got to be open to new ideas,” he says. “Regulators and management have to be open to trying new concepts, even though immediate success, or any success, is not guaranteed. Our industry came of age in an era of pent-up demand to gamble. Open a new casino and, bam, the money hit. The Mirage paid for itself in a year. Those days are gone. We’re in the real world now, where you earn your profits one dollar at a time, just like every other business. And I don’t know that we’ve adjusted to that reality yet.”

Because it’s so difficult and complicated to obtain a gaming license in most regions, Acres says innovation gets stifled.

“To a great extent, operators who win a license believe that they are entitled to customer business. ‘We’ve got the license here; you owe us your gambling business.’ The part that we forget is, the consumer doesn’t owe anybody anything. They can take their money and spend it anywhere they want. And more and more, they want to spend it doing things besides gambling.

“Our problem in this industry is not available technology. Our problem is attitude. Are we going to reach out and recruit new players, or are we going to die serving the players that are aging out? That’s our choice.”