The importance of restaurant brands when considering F&B options 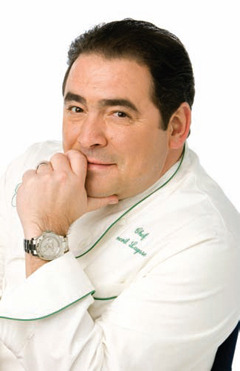 “What happens when Emeril is in his Las Vegas restaurant? Check averages go up 25 percent. Customers order more food; they get that extra bottle of wine. We sell dozens of cookbooks. It’s a crazy party when he is in there.”
—Eric Linquest, President and COO, Emeril’s Homebase

The success of high-end restaurants defies the recession, even implies its end. Food, once a gaming hors d’ouevre, has become an independent industry facet, which doubles as a contributing force to gambling totals. It’s the new wild card in town, an area more properties figure to utilize on all levels of the pricing spectrum.

Remember when “food” meant a $1.99 steak-and-eggs breakfast at the end of a hall of slot machines and craps tables?

Emeril in the Beginning

Here’s what foreshadowed the concept of a destination food resort: Lagasse, later to become the world’s most recognized chef, sprints toward an oven-on-the-set for a screaming television studio audience. Sporting some “gah-lic,” he unfurls a dramatic, overhand arcing delivery into the skillet. As “gah-lic” hits skillet, an explosive “BAM!” erupts from a studio audience.

Want to see it in instant replay?

It can be argued that Las Vegas is the Cuisine Capital of the United States. The desert city features numerous James Beard Award winners and a potpourri of citywide elegance. Beard was a cooking legend who helped establish a gourmet American food identity. The annual awards given in his name are considered the “Oscars” for food.

A Beard Award winner is something tangible that separates properties, and restaurants. Las Vegas underscores its commitment to high-end restaurants by hosting shows like Bravo TV’s Top Chef, which produce an incalculable advertising benefit.

Casinos reap the rewards of this intangible, yet powerful golden goose.

It’s a different game now. While Lagasse is not alone in the food-celeb picture, he was the first one here. And it was a twist of irony that enabled that to happen.

Longtime Lagasse employee Scott Farber and Eric Linquest, who helped the chef establish his first restaurant, know the “pre-bam” Lagasse, who owned one New Orleans restaurant in the early 1990s. While adding a second, Nola, he was approached about hosting a show for the fledgling Food Network. Lagasse had concerns about being spread too thinly and consulted Linquest.

“He’s always been a restaurant guy first,” Linquest recalls. “He wasn’t going to do the TV thing if it meant any changes to the restaurant. He said, ‘This will put more responsibility on your shoulders,’ and I told him we had his back. So he did the show.”

What a decision. Imagine if Emeril hadn’t “kicked it up another notch.”

Name recognition, indeed, could extend to cuisine. The first stop was MGM Grand, via lease agreement, in the 1990s. Lagasse would later say people thought he was crazy for bringing a fish house to the middle of the desert.

“But it was perfect teamwork,” Linquest says. “The casinos are demographic-driven; they know their customers and what is going to work for them, but they also know they are not restaurateurs. They left that to us. Sales grew year after year and we developed a reputation of being able to draw customers from other properties on the Strip. They would come to MGM to eat at our restaurant. We caught the eye of Rob Goldstein at the Venetian. He was going to build a ‘Restaurant Row’ and bring in some of the best chefs in the world, all in one spot.

“For the casinos, the idea was essential in helping them try to capture the guests and keep them on one property.”

Emeril’s, via this connection, thus entered the Venetian and the Palazzo. Its latest entry, Lagasse Stadium, combines food and gambling.

Linquest remains in New Orleans, directing the Emeril empire. Farber, a maitre d’ for Emeril back in Louisiana, was brought to Las Vegas to direct the restaurants. Along the way, he became the Nevada Restaurant Association’s Restaurateur of the Year in 2006.

Farber witnessed the evolution of chefs who gave autographs while hopefully maintaining their perspective.

“When you look at the MGM and its ‘Team of Cuisine’ as they call it, you see the celebrity chefs lined up on property and it’s eye-catching,” he says. “You have a Wolfgang Puck, a Michael Mina and an Emeril Lagasse all on one property, and it’s impressive.

“You get a customer who gets a photograph with Emeril and will have that memory forever, and will share it with someone else. That guy may take away physically a cookbook that Emeril signed for him while he was in his restaurant.

“Now the person goes home and has a guest in the kitchen. They have a real-life experience to share. They talk about it, they recommend it and say that when you go to Las Vegas, you have to go to Emeril’s, he was such a nice person, they had such a great meal, etc.”

But that’s only Plan B in the customer-service formula. Plan A occurs on the front lines, at strange times.

“If you really want to see Emeril, you are better off getting up at 6 a.m. and going to the back door and watching him surprise the vendors,” Farber says. “The fish mongers come in with their product and there is Emeril greeting them, checking the clarity, the eyes of the fish, making sure they are fresh, making sure that this is the best product available. That type of impact lasts so long. The vendors go back to their store and say that Emeril was checking their deliveries that day and for months and months, they make sure they are bringing the right products in.”

Lagasse thrives with his persona and trusted aides minding the establishments. He is on a given property perhaps six times a year.

Christina Clifton viewed several sides of the culinary evolution. The vice president of food and beverage at the Aria Resort recalls the $4.99 buffet as a kid traveling here from Arizona.

How things change. Clifton became an industry veteran, cuisine specialist and part of the Aria agenda that dwarfed her childhood dreams. Aria’s terrific restaurants feed both independent professionals and gaming patrons. The restaurants can drive foot traffic, but don’t have to. They operate independently, but partner with Aria and by extension, MGM Resorts International.

Aria actually embraced a dangerous dynamic. It opened amid the worse economy in 80 years, yet capitalized on international currency fluctuations. Find the right formula and Eur(o)eka, people can select Las Vegas over Europe.

“What resonates with customers is that we have seen, across the board in the last three to five years, an increase in leisure travel in the United States,” Clifton says, underscoring how expensive American travelers consider Europe because the dollar is weak against the euro. “I’ve noticed it when going to New York and hearing customers talk about their next trip. Instead of saying they plan to go to European cities for say, two weeks, they are talking about coming to Las Vegas. New York is certainly a restaurant mecca in itself, but in Las Vegas we have surpassed that.”

The 17 restaurants are a visual smorgasbord. They include American Fish by Mina and Jean-Georges Steakhouse, which fashions Asian seasonings and is the brainchild of James Beard award-winner Jean-Georges Bongerichen. Julian Serrano, a two-time James Beard recipient, opened a facility that was named one of the top 10 new restaurants in the country last year by Esquire magazine.

Jean Phillipe Patisserie is an elegant pastry shop. Throughout Aria, Italian, Chinese and Japanese restaurants abound and most of the signature establishments seat between 100 and 150 people. An all-you-can-eat buffet accommodates 580 customers.

“The ‘wow factor’ we have is a collection of chefs that are at a very high level,” Clifton says. “The design of every restaurant is spectacular. Each one has a different feel, and they are situated in areas where they don’t necessarily look at the casino. You are in Las Vegas, but you can feel like you are anywhere in the world.”

Although each restaurant runs itself, there is an eye toward property-wide cohesion. In some instances, like wine-tasting events, restaurants work together.

What do celebs bring, literally, to the table?

“They are rock stars,” Clifton says, laughing, “especially in situations in which we will have 40 patrons being paired with a significant wine person or having chances to mingle with the chefs. You have to watch these people go crazy. They want the chefs to sign their cookbooks, give them an autograph, take pictures with them, etc. And it doesn’t stop there. People begin tweeting and going on Facebook to talk about their experience. Now a table of two has become a table of 50 once people know what that person has experienced at our restaurant.”

Clifton believes the city has turned a corner, and its gradual rebirth will enhance business.

A Different Kind Of Wynn-Er

Wynn Las Vegas compiled a variation of the high-level chef theme. It offers more than 20 restaurants and includes James Beard-winning chef Paul Bartolotta. The difference? The branding is Steve Wynn, not the chefs.

“When we opened, it was a straightforward process with the chefs that Mr. Wynn wanted them to live and be in Las Vegas,” says Steve Weitman, vice president of food and beverage for Wynn Las Vegas. “Our chefs are in the restaurants on a nightly basis. We haven’t gone down the celebrity-chef restaurant road the way others have in the city. We are committed to an excellent, consistent guest experience, and we feel we could not be in that position if a chef was only there on a visitation basis.”

This is a different dynamic than celebrities opening businesses and lending their names to casinos, helping them drive business. Here, Wynn owns the establishments and merges the restaurant component into the overall opulence of his hotel. The restaurant experience, however, is critical. Wynn’s high-end facilities serve about 6 million people yearly.

“There is no greater interfacing between guests and employees than when the customers are eating,” Weitman says. “If you have breakfast for 45 minutes, lunch for an hour and dinner for an hour, you interact more with food and beverage personnel than any other department. Yes, we would like to see them in the gaming area quite a bit, but the personal interaction is still the most during the meals.

“Think about it: Check-in and check out is relatively quick, you rarely see the housekeeper in your room and when you play you might move around.”

So while it’s difficult to measure the impact of restaurants on the bottom line, the restaurants are both self-sufficient and an amenity to keep customers happy while playing.

Restaurants, of course, remain sensitive to the economic times. Lagasse’s establishments, for instance, have not raised prices in three years. Competition for the food dollar remains fierce.

Yet the high-end establishments can still drive traffic through casinos and offer a sure investment return that a poker hand, slot pull or dice roll cannot. They also multiply the effect of major fights, rodeos and special events.

People cannot eat their way out of a recession, true, but, given the city’s commitment to cuisine, they can at least smell the aroma of a comeback.