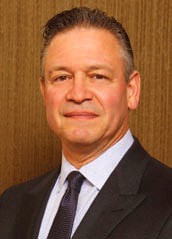 The business world likens waste cleanup to management trimming, employee thinning and the streamlining process for a downsizing, right-sizing economy.

The new president of Wynn Massachusetts, LLC starts the year helping his property clear a dump site near the operator’s site in Everett, near Boston. Wynn Resorts will convert a contaminated site on the Mystic River that previously housed a Monsanto chemical plant and then build a casino. The waterfront has been unavailable for public access for more than a century.

This project will include a five-star resort with more than 500 rooms, high-end retail and dining, ballroom and meeting space. It will redevelop an industrial neighborhood. The $1.6 billion project is ticketed for a 2017 completion.

“We intend to be a great corporate partner for the community,” DeSalvio says. “We will clean up a polluted site that will reconnect Everett with its waterfront. Nobody has wanted to touch the site because of the substantial cost of a cleanup. It would not be worthwhile if you were a developer or for an individual business owner, but our project is so much bigger that we can do the required mediation.”

Assisting new properties has been a career-long path for DeSalvio, a Glen Rock, New Jersey native. He began at Caesars Atlantic City in 1979, one year after the resort became the nation’s second gaming destination behind Las Vegas. DeSalvio later spent two years with Bally and 14 with Las Vegas Sands Corp., becoming the executive vice president of marketing. DeSalvio went on to spark the emergence of Foxwoods with a nine-and-a-half year run that left him as the executive vice president of marketing.

Then came Las Vegas Sands, again. As gaming emerged in Pennsylvania, DeSalvio became president of the company’s Sands Bethlehem facility from 2006 until 2014. DeSalvio is credited with leading the casino through a recession that delayed the opening of the hotel and for reviving the local economy.

“When you think about the things which make you most proud, that was probably it for me,” DeSalvio says. “We were the stewards of a property with extensive historical significance. The Bethlehem Steel story regarding the building and defending of America is a tremendous one. There were 30,000 people working out of that site during World War II. Their objective was essentially to come up with the armaments to produce one warship every single day.

“When you inherit a site like that, the architecture is very important to the community. The locals were afraid that someone would develop and level that site, ruining the legacy. We understood that we were building on hallowed ground. We preserved the look of it and built a nice casino. The locals were very happy that we got it right.”

DeSalvio joined Wynn last March to spearhead its successful bid to gain a gaming license. The competition was fierce and the process was tedious.

“What was important for us,” he says, “is we had a project that had substantially more jobs created at higher income levels (generating more tax revenue). With our excellent reputation of being a good employer and our chance to bring in international tourism, we felt very good about our proposal.”

Now it’s on to employing two principles with proven track records, he says. One is to foster good relationships with the host community. The other is to hire people who know how to make guests feel welcome.

That looks easy, but seldom is.

For DeSalvio, a long-time class act in this industry, it is again time to build.