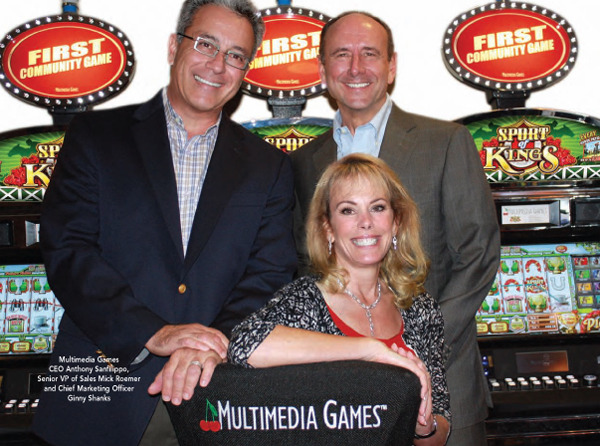 The Austin, Texas-based company made its name as a supplier of successful Class II electronic bingo games in the late 1990s, achieving much success in Oklahoma and Mexico before parlaying its specialty-the central-determinant system, in which game outcomes are determined by a central computer-into a new market, video lottery.

The company secured (and has retained) the contract for the system that runs 13,000 machines in the state of New York’s central-determinant “finite pool” video lottery system. But the company’s bread and butter, the Class II market, was changing-the field of suppliers was becoming more crowded, with established companies like Multimedia and Cadillac Jack joined by Class II games from traditional Class III suppliers like Bally and IGT. Finally, when Class II markets in Oklahoma, California and elsewhere began introducing traditional Class III slots into their markets, the company’s growth path became clear: Multimedia would become a Class III supplier.

But first, a lot of change was to come within the company itself, beginning when Anthony Sanfilippo joined in June 2008 as president and CEO. Sanfilippo brought with him a unique knowledge of what operators need from Class III slot suppliers, having spent 23 years with Harrah’s Entertainment-including long stints as head of Central Division and Western Division operations.

Before he could expand Multimedia’s reach in the Class III universe, though, Sanfilippo would need to make some changes. “No one in the organization really understood the (commercial casino) gaming side of it,” he says. “We lacked people with actual gaming experience, and as a result, we couldn’t relate to who we were selling the product to.

Over the ensuing 12 months, virtually the entire management team of Multimedia was changed. Many of the new execs are Sanfilippo’s trusted associates from Harrah’s: Chief Operating Officer Patrick Ramsey was Harrah’s corporate vice president and associate to the vice chairman. General Counsel Uri L. Clinton was vice president of legal affairs for Harrah’s Central Division, and was with the operator’s legal department for 10 years.

A key addition was Ginny Shanks as chief marketing officer. Shanks is a 25-year marketing veteran who most notably was senior vice president of brand marketing for Harrah’s.

Sanfilippo brought in top-flight executives from outside Harrah’s as well. For the CFO position, he tapped Adam Chibib, a veteran financial consultant who served as chief financial officer for several technology companies in Texas. And on the game sales side, he brought in a seasoned veteran of the Class III slot manufacturing sector, Mick Roemer.

Shanks brought invaluable brand management skills to the company. “Prior to Ginny’s joining the leadership team, Multimedia lacked a systematic and disciplined approach to thinking about the products under development,” says Sanfilippo. “We had 160 game titles under development, but those titles were not part of a well-planned product strategy. Under Ginny’s leadership, we have reduced this from 160 to about 50 titles that we are working on at any given time. We really focus on what the customer thinks, and whether a game is going to resonate with the player.”

“Mick is a seasoned veteran who truly understands what it takes to get a product from the concept stage out to market,” Sanfilippo says. “He also provides us with good strategic thinking regarding how we roll out new products, which is an area of expertise this company lacked before he joined us.”

With Roemer’s addition earlier this year, the stage was finally set for Multimedia’s move into Class III markets.

Sport of Kings
Multimedia’s introduction to many Class III operators will likely be a game that is already drawing positive feedback in Oklahoma. “Sport of Kings” is a community-style penny video slot that features a competitive horse race as the bonus.

According to Roemer, the game’s strength is in its simplicity. “Everyone understands a horse race,” he says.

“The animation is great. You collect tickets during the game, and bet those tickets on one of the horses. Every six to eight minutes, a race will go off, and if you have a ticket, you get into the race. The award is a coin amount based on your wager in the primary game. That determines the range of what you win. Everyone wins something in the bonus.”

The “tickets” are actually multipliers that are earned through primary game play. The prospect of winning more by wagering more means the game promotes high average bets.

Like other community-style games, Sport of Kings utilizes a computer controller to link the games. In this case, a variety of Multimedia primary slot games are used. “We have a whole library of games approved,” Roemer says. “There are five or six games in the initial launch, but there’s a pretty big portfolio behind that.”

Sport of Kings is currently in three Oklahoma locations, and according to Sanfilippo, early feedback is very positive. The company is already in the process of developing a second community-style game.

Multimedia’s other big product out of the Class III gate promises to be “Casino Commander,” a tournament system first deployed in Class III Oklahoma installations at the end of July. The system places up to 60 slots on a network to automate the tournament function.

“Using whatever products you have on your floor,” says Roemer, “you can download a tournament-style, 150-percent game, time the play, track the players, ad post names according to where they sit. We will automate the accounting process, provide a leader board, and provide winners with reinforcement. When the tournament is done, the system does the accounting, refreshes and returns the machines to revenue games.”

Roemer notes that while initially, only Multimedia slots can be linked to the Commander system, in the future, the system will be further developed to accept the slots of any manufacturer.

“Our Casino Commander system makes it very easy for a casino operator to switch from an ‘in-revenue game’ to an ‘out-of-revenue’ tournament game,” Sanfilippo says. “It has been out in a Class II version for a few years.”

The first Class III Casino Commander system is in place at the Chickasaw tribe’s Winstar casino outside of Dallas, Texas. According to Roemer, the company also recently won a major contract with a California casino to install the system. “We were in competition with Spielo and IGT, and our system beat theirs hands-down,” he says.

The coming Global Gaming Expo will provide a vehicle to introduce not only these products to commercial casinos, but Multimedia’s growing library of Class III slot games. Games that have been popular early on in Class III markets have included the ancient Egypt-themed “Queen of the Desert” and “Ernestine’s Ringy-Dingy Reels,” a clever game utilizing Lily Tomlin’s telephone operator character from Rowan & Martin’s Laugh-In.

Finally, the growing game library is accompanied by a new high-definition video format in a proprietary cabinet called “Player HD.”

“Player HD features a high-definition, 23-inch screen that the players seem to really enjoy,” says Sanfilippo. “We continue to receive terrific player feedback for games played on this cabinet. The content we offer is important, but the packaging is equally important. We need to make sure the entire package is appealing to the player from entertainment value to comfort level.”

Rolling Out
The rollout of Multimedia’s Class III products that began in Oklahoma is continuing now in California, where the company has been licensed by several tribes. From there, says Sanfilippo, the company will move to Mississippi, Louisiana, Minnesota, Wisconsin and Florida. “Those are jurisdictions where we have not been licensed (in Class II), so that’s the first wave we’re focused on,” he says.

“Our plan from here is to develop a product that is robust, reliable and interesting, and will perform well in casinos. Our strength is our respective base of knowledge and the experience we all bring. We believe there is a demand in the market, and we’ve made sure there’s talent in our organization to deliver on our plan. It’s beneficial that a number of us have been in the industry a long time-people take our calls, and we’ve been successful in getting space on casino floors. But ultimately, the game has to perform.”

Roemer says he has no doubt the games will perform. “We have a beautiful cabinet in our Player HD product, the games are working really well and the numbers we’re getting are great,” he says. “I believe we’ll compete well against all of them, including IGT and Bally.”

“We understand that for Multimedia to be successful in our Class III initiative, we have to be a company for which the majority of the games that get on casino floors perform above house average,” says Sanfilippo. “We are a relatively small company compared to some of our peers, and as a result, we can move quickly on most opportunities. We can also have a more personal relationship with our customers. I spend a lot of time engaged with our customers, talking to the general manager or head of slots. Our team is also actively engaged with our customers. We pride ourselves on that. We’re a company that can listen, focus and react quickly in the way we develop games and service customers.”

Roemer sums it up succinctly: “This is the rebirth of a great small company.”