Partner with Global Market Advisors and an expert on non-gaming revenue. 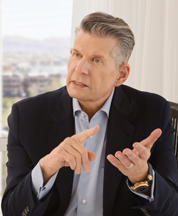 In the 40 years Atlantic City has existed as a casino destination, nothing was as important as the opening of the Borgata in 2003. Atlantic City was a declining casino town with competition poised to enter states along the borders. Bob Boughner was charged by Boyd Gaming—the operating partner of Borgata, along with MGM Resorts, which now owns the facility wholly—to build something different. Borgata renewed interest in Atlantic City and forced competing properties to up their game. Today, Borgata is the market leader by several degrees of magnitude in Atlantic City. Boughner spoke with GGB Publisher Roger Gros in April in Las Vegas to talk about how the Borgata was envisioned, designed and operated. The discussion includes other non-gaming issues.

GGB: We were covering the development of the Borgata fairly closely in those days, and I remember you walking us through a layout of the casino in the Atlantic City Convention Center to see how far it was to walk between parts of the hotel or how close together the chairs were in the theater. Why go to such detail?

Bob Boughner: We saw that those efforts that the team put together—and everybody contributed in a great many ways—came to understand and appreciate the fact that we are a very visceral business. We are a business that focuses on many aspects of the experience. I tried to talk to the team in that environment, to say this was really about scene 1, scene 2, scene 3, scene 4, and scene 5.

When you walked in the front door, what was scene 1 all about? What were you trying to say? What did you want to communicate to the consumer when they walked in the door? Then scene 2, the same pathway—depending on which direction you went—you wanted to give something that was inviting and provide something that created a desire to see more, to participate more. And then we wove in the various amenities on a logical pathway. We, as humans, I think, are very much inherently lazy. Especially with the long walk, and a long walk gets dull and boring, and lacks interest completely. So, we tried to minimize the instances in the building of those long walks, but where there was going to be a long walk, make it interesting. And also, take advantage of the people that were in the building.

Atlantic City had a negative perception in those days. How did you convince people to come back? We used to call them the “rejecters.”

Today, the Borgata is by far the best gaming performer in town, by sometimes triple your competitors. Is that because the non-gaming components are so compelling there that people want to gamble there, as well as go there for other reasons?

I think that non-gaming has played a role from the beginning, and it still plays a role at the property. But, frankly, it was a superior gaming product to what was in the marketplace at the time. Because it was designed at a certain level of capacity, and not added on to over the years, unlike many of the operations where they started small, or they didn’t know what the future held, and so they added on in bits and pieces, and sometimes those bits and pieces never got knit together, so that it was not a cohesive experience.

But it was. Sometimes we did double what Bellagio did—obviously, a very, very successful and enjoyable property. I’m not comparing one to the other, but there was a level of non-gaming appetite that existed in Atlantic City. We helped create an appetite among customers, because they were really very fatigued by the restaurant product in the city at that time. They were very fatigued by the entertainment product, except in some rare instances.