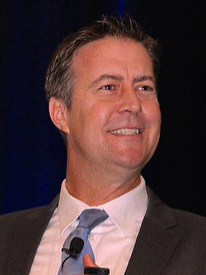 Bo Bernhard has been executive director of the International Gaming Institute at the University of Nevada, Las Vegas since 2011. He is also the chairman of the UNR/UNLV

Executive Development Program, held for 10 days each November in Lake Tahoe. He talks about the recently completed program, the IGI Innovation Lab, which encourages students to invent new games and products for the gaming industry, as well as other issues related to the IGI. He spoke with GGB Publisher Roger Gros in his offices at the Stan Fulton Building at UNLV in December.

GGB: You just completed the most recent Executive Development Program (EDP). During the welcome to the students this year, you said it was your favorite event of the year. Why is that?

Bernhard: This is a really special program. Bill Eadington started it in 1990. That first year there were 14 attendees. This year we had more than 60. But in the original event in 1990, a young Andrew MacDonald sat next to a young Mark Lipparelli. Andrew is now the chief casino officer for Las Vegas Sands, and Mark became the chairman of the Nevada Gaming Control Board and a leader in the manufacturing side. The two of them didn’t know each other but became fast friends and created a network that plays out exponentially over the years.

Every year, the graduating class sends notes out to me and others, and this year, the gentleman who just got promoted as general manger of the Star in Sydney was talking about how he was up for that position and believes one of the reasons he got it is because of his involvement in EDP.

It just builds this family where you make friends from all over the world, spending nine intense days in Lake Tahoe, the most gorgeous place in the world that you never get to see because they’re working hard 8-5 each day hearing from some of the most amazing people from inside and outside the industry, and then spend the evenings working on a really difficult team competition. That’s what makes it so special.

When you were asked by Dr. Eadington, the founder of EDP, to take it over when he was sick and dying, how did you feel?

I remember it to this day. I was in the car when he called to ask me. It was hard enough to take in the difficult news about his health, but wrapped up as it always was with a teaching moment, he asked me to take it over. My first thought was that I was clearly not qualified, but what could I say? I was overwhelmed that first year when we did it together. The following year was very emotional, and we weren’t sure about what we were doing. The final slide we show on the first morning was a picture of him just erupting into laughter at something one of the students said. It gives us the opportunity to stress that if you’re someone who just sits in the back and doesn’t ask questions, this isn’t the place for that. So another teachable moment from him.

It’s an application process, and we read those applications very, very closely. After all these years, I think the industry has a pretty good sense of the kind of person who would benefit from this. The admissions process, while it’s formal, we’ve gotten good at spotting the kind of people that would graduate. And by the way, it’s got both the UNLV and the UNR (University of Nevada, Reno) stamp on it. Like in many states, the in-state schools don’t always get along, but this is one instance where we are both on the same page.

Tell us about the Innovation Lab at IGI.

I was asked to lunch one day by Dr. Mark Yoseloff, who is himself a legend in the business. He was a prolific inventor of table games, had a stint as CEO of Shuffle Master and before that was COO of Coleco when they did Coleco Vision, which essentially transformed the American living room. He’s very accomplished, as well as having a Ph.D. in math from Princeton. He told me he didn’t want to die with this knowledge, he wanted to share it. But he didn’t want to have tests or midterms or papers. The final exam would be to invent a game or product for the gaming industry. Up until that time, there was no class on how to invent a gambling game or device and unveil it before industry leaders at a showcase presentation, kind of like Shark Tank. These games are completely creative and unique.

Unlike at other universities where the college owns the work of the students, at the Innovation Lab, the students keep the vast majority of ownership. Why did you structure it like that?

First of all, we believe it’s their ideas and hard work that make the game or product viable. And we’re here for the kids in the end. Both Dr. Yoseloff and myself agreed on that. So you don’t have to partner with some stuffy old professor, who would be paid lots of money and grab the credit.

We’re very proud that our students have been granted 12 patents on their games or devices, at a time where it’s getting increasingly more difficult to patent gaming ideas.