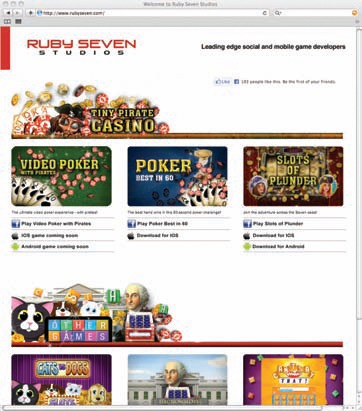 The two studios come together to vie for a slice of the lucrative $1.6 billion social casino gaming industry. Ruby Seven brings a knowledge base of social and mobile game publishing, and Bluhare Studios contributes a design team responsible for some of the most successful slot games in casino history, including Reel’em In, Jackpot Party, Monopoly, Wizard of Oz, and Aladdin and the Magic Quest.

(Jackson was senior vice president of gaming operations at WMS Gaming when many of its most popular games were released, as well as president and CEO of slot-maker Sigma Game.)

The partnership’s mission is to use the combined skills in gaming and social media to create social gaming content for use on iPhone, iPad, Android and Facebook.