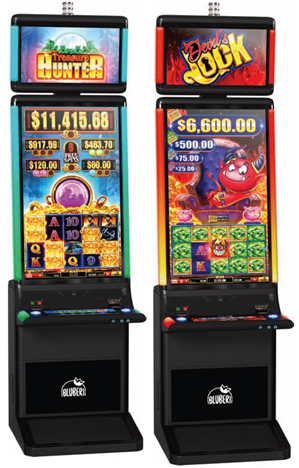 During the past two years, the 27-year-old Bluberi Gaming Canada, Inc. has worked on evolving from a Class II supplier serving Canada out of its Drummondville, Quebec headquarters into a player in the larger Class III markets, especially in the U.S.

These days, those efforts are being headed by CEO Andrew Burke, who took over as CEO of Bluberi in January 2020 after a longtime stint heading the slot division at AGS, and Mike Brennan, the chief product officer Burke brought in to oversee the expansion of Bluberi’s slot development efforts. Brennan had long been a top executive at Atronic, Gtech and ultimately IGT, where he was vice president of product management.

This year, Bluberi adds a new game development studio in Reno, and Brennan has been busy retaining and collecting talent, and overseeing teams of game designers in Drummondville and Reno who are encouraged to collaborate with each other. Brennan says collaboration is better than a system in which a supplier’s studios are competing with each other.

Burke agrees with the approach. “I used to think you should have studios that are competing to be the best and to be the resource, the No. 1 studio,” he says. “Then you give the one that is the best more people to hire and more games to do.

“But what I found is that doesn’t result in the best games. We’ve seen people in the Reno studio give feedback on a game that the Quebec team is doing, and it makes the Quebec game better, or vice versa. That’s a win. There’s some real magic happening there, watching it flourish, where they’re all participating in each other’s success.”

“It’s a fresh-eyes approach,” says Brennan. “To have these fresh eyes at different milestones across the process can be really good if you have the right people. And we do—our team is super confident yet humble, comfortable and collaborative. And, we’re really lucky to have our group of folks in Quebec, with a couple of new hires. It’s a really a strong, complementary group.”

Where it will all come together, says Brennan, is at this year’s Global Gaming Expo.

“We’re trying to do things a little differently,” Brennan says. “Last year we talked about how we brought a lot of talent from elsewhere, and the reason a lot of us came here is to scale the things that worked previously, do new things, and avoid the things that didn’t work.

“And I think what you’ll see in our games at the show is us executing on being different, on how we tell our story—being disruptive is the word we use. G2E is exciting. We’re going to be telling our story at the show, and our story is a great story.”

It starts with the people. “From a business standpoint, we’re just in growth mode,” says Brennan. “We’ve been adding key individuals, to key disciplines. From top down, we’re trying to bring on new jurisdictions. That can be a slow and painful process, but we’re trying to add markets.”

“It’s all about people,” says Burke. “We’ve been working really hard to retain our best folks, then develop them and make sure that all of our key people at the company feel like they have paths forward.

“And then we recruit and find outside talent to supplement the internal talent. And I think over the last year in particular, we’ve added some really great team members in product management, in analytics, to bridge the gap between the market and studios. But we’ve also promoted and really gotten the best out of our folks up in Drummondville, creating some really great games.”

“We’re looking at our hardware and at finding ways to navigate all the operational challenges the industry’s going through,” says Brennan. “And then we’ve been focusing a ton on content. And it’s really a mix of bringing the right balance of creativity and process—call it fettered creativity.” 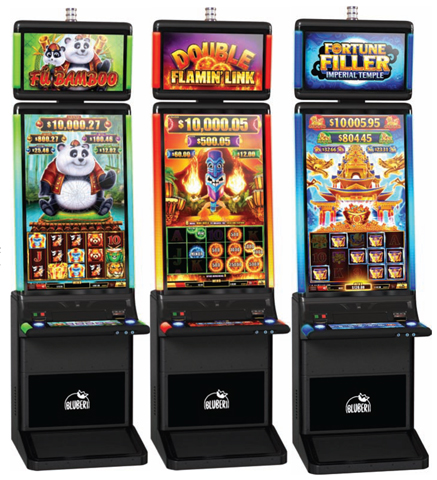 Bluberi will display that creativity in several new games on Bluberi’s Novus b49 cabinet, which is still a new hardware package.

“We will be showing very subtle changes, like a brighter approach to the frame lights, but we like our cabinet,” Brennan says. “The 49-inch flat screen is doing well. And if we do make a new cabinet, which everybody’s working on, we’re hyper-focused on making everything backwards compatible. We’re trying to be the easiest company to do business with; we do not want to leave our customers high and dry.”

At G2E, new games to be highlighted on the cabinet include Rocket Rumble, featuring an innovative progressive free-spin ladder, instead of jackpots. The graphics are great, with rockets flying to like-colored free-game choices.

Also on the b49 will be Fu Bamboo, featuring a collection feature in which a panda character grows in size with collected gold symbols until cracking—complete with a clever visual effect of the monitor cracking—to reveal a progressive picking bonus. A free-spin round features an expanded reel array.

A new game family to be launched at G2E on the b49 is Double Flamin’ Link, with the first true hold-and-spin feature to appear on the cabinet. The hold-and-spin round features a second chance—the character can double cashballs to reset the counter. The game will be available in Q1 2023, Brennan says.

Finally, the new entry on the Big Mech cabinet—the giant stepper cabinet with colorful back-lit reels and a see-through front—is Reels of Steel Fortune’s Forge. The oversized game is a three-reel, single-line game with a bonus wheel added. Spots on the reels can award multipliers, cash-on-reels awards, or a wheel spin. The game will be released by G2E, according to Brennan.

The Art of Design

Brennan says the game development team from Bluberi is going to put on something of a clinic at G2E, demonstrating for customers and attendees alike what goes into the company’s game design process.

“In the past, there have been walls been put up (in trade-show booths),” he says. “We’re the opposite. We’re inviting anybody to come in. We’re actually inviting people to come in, and give us constructive criticism on our games if you’re at a competitor.

“It’s going to be tactile. Our theme is touch and feel things. We’re kind of making some creative moves away from digital displays, and we’re going to showcase people. You’re actually going to hear from the people who make these games, with some ‘whys’ and neat insights. We’re actually going to be making games for customers at the show. So you can meet our talent, see how it works and talk about the process.”

Burke says the result of that process is that Bluberi games are developing a distinctive style. “Over time, you’re going to be able to look at our products and say, oh, that’s Bluberi,” Burke says. “They’re doing twists on the game mechanics, and you can see that our art is very, very attractive. Our focus is on building our identity, and Mike and the team have done just an awesome job in the early stages of that.”

“I’m most excited about our booth,” says Brennan. “I know I’m biased, but we haven’t been doing other trade shows. We’ve only been doing G2E these last two years, because we’re a small company and we’ve got to spend our money wisely. And so for us, G2E is our Super Bowl. It’s our big event.”

“I think this is going to be probably the biggest G2E in my career,” adds Burke. “For me personally, I know that’s a bold statement, but it’s my first time in the CEO seat, and for a couple of years we’ve been in turnaround phase. But now we’re out of the turnaround phase and we’re fully on into growth mode. And I really feel like this G2E is the first real sign of that for us.

“Mike put this challenge forward—he said to the team, ‘I want to have more good games—good game concepts than we can develop.’ And I think we’re starting to get to that point where we have more good ideas. We’re in the early innings, but still, there’s something really exciting here.”