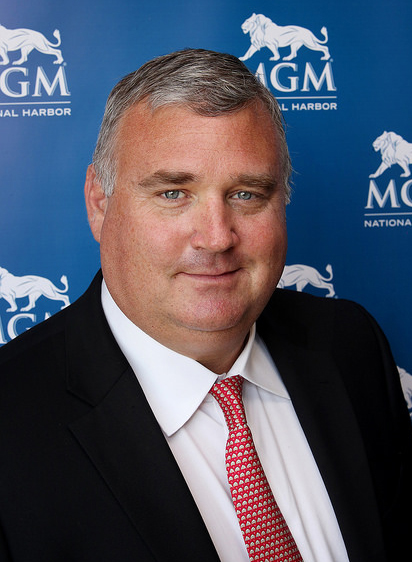 MGM National Harbor has been an unqualified success in the Maryland casino market. The closest casino to Washington, D.C.—you can actually see the monuments from the deck of the hotel’s podium—National Harbor quickly took the top spot in the revenue race. Bill Boasberg, the general manager of MGM National Harbor, explains how it involved more than “build it and they will come.” The company had to understand the market and respond to its demands quickly after opening, or all would be lost. He spoke with GGB Publisher Roger Gros at the National Harbor property on the shores of the Potomac River early in the summer.

GGB: You’ve been open less than a year and are already dominating the Maryland market. That isn’t a coincidence, is it?

Bill Boasberg: We’re getting better every single day. The business is stabilizing every day. Our service is getting better every day, we’re learning about our customers every single day. When you open something this big, you can do a lot of planning but there will always be things you could have done better. So we’re making tweaks to things that we think we can do better. And we’re listening to our customers, and our company gets great feedback and surveys from our customers, so we’re better able to make adjustments based on the customer feedback. So, we’re real pleased with where we are right now.

How long did the curiosity factor last? And now have you determined who your core customers are?

Probably the first 90 days we had a lot of people really just walking through, coming to see the place. And while it’s not quite as crowded as it was in the first 90 days, the people are still coming to enjoy the restaurants, go to the shows, spend time in the casino, and so forth. And it’s good that it’s not as packed as it was in the first 90 days, because now people who are here can breathe and enjoy the space. Obviously, it’s easier to service the customers, and you can get a better handle on the crowd. We recently had our first concert out on the plaza, and we thought it created a great vibe and energy on the property. I think we’ll continue to be busy. A lot depends on what shows we have, special events and entertainment. And our convention business on property now is really taking off, and so, we’re in a good place.

You have a beautiful 3,000-seat showroom. How has that worked so far?

It’s been fantastic. We do a couple shows a week—sometimes three or four. I don’t think there’s been one show that hasn’t sold out. And we’ve had great acts in here so far—Bruno Mars, Stevie Wonder, Sting, Billy Crystal and others. So we have had comedians and concerts, and we had our first Vietnamese Asian act and it was a huge success. It sold out, and we had people waiting in the lobby, in the conservatory, to get in the show.

You have a very good Asian business—a full pit of baccarat tables. Is that a core business of yours?

It sure is. In our Asian pit, we have 16 midi-games, and we also have midi- and mini-bacc in our high-limit area. Within a 10-mile radius, there are about a quarter of a million Asians, so obviously it’s a core focus of ours. It’s been very successful, and we think it will grow even more.

As the name implies, MGM is in National Harbor, adjacent to an area that was really built around conventions and meetings, with the Gaylord Hotel as the flagship, really a meetings and convention hotel. How do you work with that facility?

Our facility is more intimate, more high-end than the Gaylord. We have about 40,000 square feet of convention space. The Gaylord has 500,000—one of the largest on the East Coast. We have a very good, positive relationship with Gaylord. If there’s a big group—and their groups are generally large-scale—which we could not put on, they’ll come over here, they’ll do dinners or break-out meetings in our rooms or theater. We’ve established a great relationship with Gaylord since we came to town, and we consider them a partner of ours.

Let’s talk about gaming. Your slot VP (Alex Alvarado) created a slot “draft” where the slot manufacturers could place the machines on the casino floor you were going to buy from them. Pretty innovative. How has that worked?

Alex came up with the concept of letting the different manufacturers help with the placement of the machines. They helped us lay the floor out. That’s been successful, but like any casino, we’re figuring out what machines are working, and which aren’t, and what’s popular and what’s not, what location is better than the other, and we’re making adjustments based on that feedback.

I understand the table games have exceeded your expectations.

Yes, the table market’s been fantastic, and it’s really been all games. I’ve never seen such a craps volume as we have here. Roulette is extremely popular, and obviously blackjack does very well. And it’s the same thing with poker. Our poker room has been No. 1 in the market right from the start, win per unit, and we think there’s more to grow as well in the poker room.