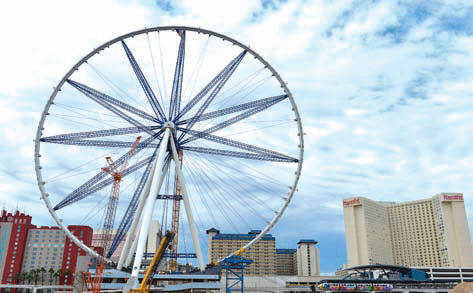 Could the High Roller ultimately be called the Pepsi Cola Rolla?

Like the Staples Center in Los Angeles, Citi Field in New York, Citizens Bank Park in Philadelphia, M&T Bank Stadium in Baltimore and numerous other arenas and attractions that have made money by selling their names, the High Roller may soon be prefixed by the name of a major corporation. The operators of Caesars Entertainment’s new retail corridor on the Las Vegas Strip are offering “sponsorship opportunities” for a company that wants to put its name on the 550-foot observation wheel that will be the centerpiece of the Linq, a $550 million outdoor retail and entertainment corridor. The circumference for the wheel was completed in September, with the cabins to be installed next.

“We have already received interest from big brands for the naming rights of this landmark, but given its significance on the Las Vegas landscape, we continue to search for the right brand to feature as the name of the wheel,” said Dan Burgner of Caruso Affiliated, which is in charge of the sponsorship.

The first openings will take place in December, with the rest of the development scheduled to open in February. The observation wheel will still be under construction and will open after that.