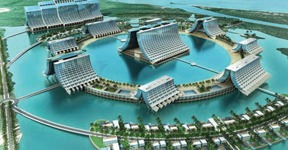 Tony Fung, scion of one of Hong Kong’s best-known banking families, is pitching officials of the Australian state of Queensland on an A.2 billion (US.75 billion) gaming and entertainment mini-city called Aquis Resort at the Great Barrier Reef—a “man-made wonder of the world,” as he describes it, that would dwarf anything they’ve ever seen Down Under.

He’s purchased an option on 300 hectares (850 acres) of farmland about 13 kilometers north of Cairns in a seaside hamlet called Yorkeys Knob. Plans call for five hotels at the site totaling 3,750 rooms and 1,335 apartments and luxury villas plus a golf course, a 25,000-seat sports stadium, two theaters, 13,500 square meters of high-end retail, a lake and reef lagoon, and one of the world’s largest aquariums.

The “international class” casino included in the plan, targeting wealthy Chinese, would be larger than James Packer’s flagship Crown Melbourne and would feature 750 table games and 1,500 slot machines.

“I have recognized the unique suitability of the Cairns region to develop an integrated resort, based upon the Macau model,” Fung said in an open letter accompanying the proposal.

Aquis, he said, will “drive Asian tourism awareness of north Queensland and the Great Barrier Reef,” and provide the state “an opportunity to fend off its southern and regional competitors for the increasingly important Chinese tourism market.”

Not surprisingly, state and local officials are intrigued. Fung has a sizable reputation as an investor and developer. The billionaire is credited with building the Hong Kong Convention and Exhibition Centre and has extensive holdings in Queensland that include a sugar cane plantation, a cattle farm and two private homes. They especially like his talk about 9,000 construction jobs and 10,000 full-time jobs once Aquis is open.