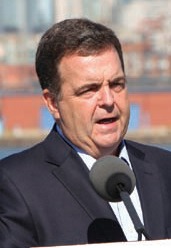 The Ontario Lottery and Gaming Corporation is finishing up a study on land-based gambling which had been requested by the provincial government. OLG President and Chief Executive Officer Rod Phillips said, “We were asked over a year ago by the government to prepare a report and look at how we can modernize and improve the returns to the province in a responsible manner. We’re looking at what is the right way to approach lottery and gaming in Ontario for the next three to five years based on what’s in the best interest of Ontario.”

Many people believe that points to one or more casinos in Toronto. Councilor Giorgio Mammoliti has proposed a Las Vegas-style casino at a revitalized Ontario Place and another at the Woodbine Racetrack in Etobicoke, which already is a racino. He said the need to protect existing casinos in Niagara Falls and Windsor has been used for too long as an excuse to deny Toronto its own casino. He said, “Toronto deserves a world-class casino. I would say it’s time for Toronto to get some help here. We’re suffering. And it’s time that everybody consider us for a change. People like to gamble, whether we like it or not, and they will gamble.”

In fact, more than 60 percent of Ontarians gamble, according to a 2005 study by the Toronto-based Responsible Gambling Council. However, a recent poll of 1,560 individuals age 18-plus in Toronto, conducted by Forum Research, indicated 50 percent of respondents opposed a new casino in Toronto; 35 percent approved and 15 percent have no opinion.

In Niagara Falls, MPP Kim Craitor said he would fight against a Toronto casino, claiming it would negatively impact casinos in his district. He noted 30 percent of Niagara casino revenue comes from the greater Toronto area. Craitor said, “I’d present it from an economic point of view. I was there when we created the casinos. The intent was to not just raise money for the province, but spur economic development. Go and look at the billions of dollars spent on this community because of the economic development, because of the casino. In Toronto, you’d just be putting up a building and taking money out of people’s pockets, not promoting further economic development.”

Currently, the Ontario Lottery & Gaming Corporation generates $7 billion a year in business and returns to Ontario range from $1.7 billion to $2 billion, said spokesperson Tony Bitonti. However, over the past decade, said Phillips, the contribution from casinos that border the United States has declined from $800 million to $100 million last year.

Finance Minister Dwight Duncan explained, “When Casino Windsor was opened there were no casinos in Detroit. There are three now and there’s a casino coming to Toledo, Ohio. The border is much, much more difficult and Americans need a passport to come over. That world is changed, so what does that mean going forward? How do we continue to protect those border casinos as we maximize the profit potential of OLG?”