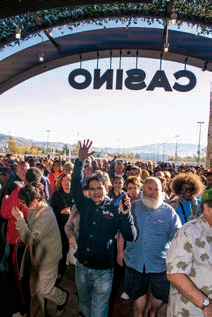 The Graton Resort & Casino in Rohnert Park, described as the “0 million gorilla” by one industry analyst and easily California’s largest casino, built in what was once a cow pasture, opened last month to thousands of visitors from the Bay Area. At the direction of the fire marshal, the casino had to turn away hundreds of customers, even though it opened an hour ahead of schedule.

Traditional lion and dragon dances at all of the mega-casino’s three entrances greeted the first visitors.

An estimated 10,000 visitors had tramped through the casino by the end of the first day. California Highway Patrol officers along the famed Highway 101 monitored traffic that backed up for miles.

The casino is about 50 miles from downtown San Francisco. It took some motorists driving on Highway 101 four hours to make a trip that normally takes about 45 minutes. Some of those abandoned their vehicles once they arrived in the town, parking on streets or in hotel parking lots, and made their way on foot to the casino.

The new, 340,000-square-foot facility, open 24/7, has 3,000 slot machines, plus 144 blackjack and other table games. It also has seven restaurants, four of them full-service, one run by celebrity chef Martin Yan and another by Chef Douglas Keane. In a local twist, Sonoma and Napa wines will be featured in the lounges and bars. There is also a 500-seat food court. Owned by the Federated Indians of Graton Rancheria, managed and operated by Station Casinos under a seven-year contract, the new casino employs 2,000.

There is no hotel, although the tribe may add one in the future. They have room. The casino is built on 254 acres purchased in 2005.