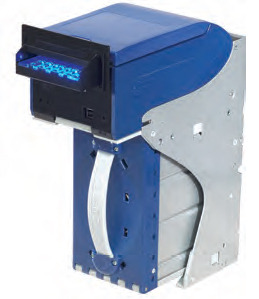 A few years ago, bill validators and ticket-in/ticket-out printers replaced coins on the casino floor—but the technology didn’t sit still.

Today, the technology going into bill validators and thermal printers is moving toward ever more sophisticated validating of bills of many nationalities, and letting players transfer funds from smart phones to their game of choice.

We talked to five companies that are on the “printing edge” on such technology.

Founded in the 1930s by the Mars candy company to sell through vending machines, MEI—originally an acronym for Mars Electronics, Inc.—developed the electronic, non-contact bill acceptor. It has created several families of electronic payment systems that perform over 2 billion transactions per week.

In 2012, MEI will introduce the next generation of its MEI Cashflow SC Series validators. According to MEI Senior VP Eric Fisher, “These will be a stronger, faster version of our existing technology. Our customers said ‘if it’s not broke don’t fix it,’ but to keep the good and take out the bad.” The next generation’s improved recognition system uses transmissive technology to look through bills to “see” metal threads embedded in paper by the U.S. Treasury.

The Cashflow SC Series’ full-scan “light bar” source uses six wavelengths and includes a seventh wavelength for future bills. “We’ve future-proofed the next generation,” says Fisher. The product has a 25 percent faster acceptance rate. It recognizes more bills, including multiple currencies, and accepts older bills. Its jam rate is one in 80,000—10 times better than the competition, according to Fisher.

The technology now has bar-code recognition, which allows four-way bar code acceptance of tickets. It interfaces with server-based systems.

This next generation inhabits the same footprint as the old. “You can swap out heads without having to swap out the entire bill acceptor,” Fisher says. “You can have two different heads on the slot floor, and they can coexist.”

MEI’s Easitrax Soft Count integrated software/hardware solution extends the security and acceptance offered by Cashflow SC into a casino soft-count room. Information collected by the bill validator goes into a database that can be networked to multiple locations and accessed to analyze slot performance.

According to Fisher, “Easitrax Soft Count is more of a total cash management solution, from the slot floor to the count room. It monitors each cash box and performance data in real time on the floor, and manages the soft-count process. It’s a cash management partner.

“We consider ourselves the casino’s offensive linemen. We don’t make the slots, but we make them better. We accept street-grade money that would stay in the customer’s pocket under a lesser-grade validator.”

CashCode One was the industry’s first bill validator, and Ardac Elite its first high-imaging bill validator. Crane coined the phrase “bill validator” and the slogan, “We don’t simply accept or read bills, we validate them!”

According to Product Manager Nishit Shah, these products offer four-way bar code acceptance. The base product is CashCode One, a software and hardware innovation. Extensions include the new 900 Cashbox, which holds more cash, so instead of dropping every day you drop every other day, improving operational efficiency. CashCode One, introduced in 2009, offers added capacity through the 900 Cashbox and the oneCheck.

Shah adds, “The oneCheck system is the only cash management solution which does not require upcharges. You get this without paying extra. Our products are beltless and have no rotating parts, and are future-proof. Other products require a physical hardware upgrade. We use existing hardware.” The technology has a 98 percent or higher acceptance rate for bills.

Ardac Elite captures the image of bills inserted and reduces player disputes. “It is the only bill validator that gives you the image of the bill on a handheld, which you can show to the customer,” says Shah.

The 2500 Cashbox “is the industry’s first-ever cashbox designed for the redemption kiosk. It helps the casino reduce drops and stay in compliance,” says Shah.

Since its founding in 1983, FutureLogic, Inc. has developed many of the TITO gaming printer’s features and functions that are now industry standards. It recently introduced the GEN3 Evolution printer, with separate processing environments for TITO and promotional couponing.

The PromoNet promotional couponing solution, currently undergoing field trials in Las Vegas, can be integrated with TITO gaming printers such as the GEN3 Evolution printer and GEN2 Universal printer.

PromoNet can trigger a marketing campaign based on game play metrics, player tracking information, POS systems and redemption terminals, and then monitor its success and return. Marketing departments can tailor promotions to specific customer behavior and create campaigns for carded and non-carded players.

TransAct Technologies makes transaction printers for banking, point-of-sale and the gaming industry. “We are all about transaction printers,” says Executive Vice President Tracey Chernay. “We do one thing and do it very well for a variety of industries.” One of the company’s biggest customers is Gtech, the world’s largest lottery provider.

The Epicentral Campaign Center lets the casino fully automate the Epicentral system across the casino floor. Operators can create specific rules utilizing gaming, retail and hotel data and real-time casino play to determine when to print a particular coupon. They can create promotional campaigns in advance and run them automatically over any specified time. They can personalize coupons by connecting real-time to gaming and non-gaming systems, and choose time of day, week or year, plus conditions when a coupon is issued.

The Epicentral Mobile Player offers coupons to players through a smart-phone app. It can give a player promotional offers at the slot machine, in a casino restaurant, or at home. The casino can speak directly to the customer before, during or after a visit and send offers to encourage a return visit or welcome the customer back.  By being offered multiple coupons or promotions, players can choose what promotion they want.

Introduced last year, the Epicentral Mobile Host allows casino hosts to walk through the casino with an iPad or smart phone and give coupons directly to players using the Epicentral Server Manager, or directly to the TransAct’s ServerPort device in the slot machine. It can enroll a player in a slot tournament or offer an uncarded player an incentive to sign up.

Tom Nieman, vice president of global marketing for JCM Global, and Jean Louis Drapeau, vice president of sales and marketing at the Canadian firm Nanoptix, recently talked about their strategic alliance. JCM has a long history in bill validation. Nanoptix has developed a new printer, the Paycheck 4, which Drapeau calls “the fastest printer in the gaming industry.”

It prints at 250 mm per second, printing a ticket in six-tenths of a second. According to Drapeau, “Our printer is extremely reliable. We have double the print head life and double the life of any printer. It has a base memory that allows the full use of multi-color logos.”

Unveiled at G2E in October, the printer demonstrated its ability to talk to an operator using a cell phone to alert him that it is time for preventive maintenance.

“Any potential usage can be done through a cell phone,” says Drapeau. “The operator can tell if the cash box is nearly full without opening the door.” The wireless system will also benefit the player, who will be able to load the machine with cash through the phone, and collect cash, gifts or redemptions.

JCM’s iVizion Bill Acceptor, introduced in 2010, uses Contact Image Sensing, or CIS, to capture a banknote’s complete image. Says Nieman, “All bill validators to date work on grabbing data points. We do that and capture 100 percent of the image, and can retain it while constantly improving the algorithm. Notes have a life cycle. The ability to validate notes is critical to the industry. The sophistication of counterfeiters is staggering. But no matter what shape the note is in, the device will be able to determine if it’s valid or not.”

After JCM introduced the iVizion, the Hard Rock Casino in Las Vegas converted its entire floor to it. “We are doing the installation at New York’s Aqueduct Racino, which will have 5,000 devices,” says Nieman.

JCM and Nanoptix worked with a Japanese firm whose expertise is cell phone transactions, or more specifically, “near-field communication.” NFC is widely used in Japan, enabling cell phones to be “mobile wallets” to pay the bus or train. Such technology is not yet approved for the American gaming industry, but when it is, JCM and Nanoptix will be ready.

“For years we have provided hardware for accepting money,” says Nieman. “We are evolving into technology that will accept NFC.” This Mobile Wager Wallet, or MW2, was demonstrated to select audiences at G2E. It is a concept in development, but Nieman is convinced it is the “next big thing.”

“In North America, we have been isolated from this technology,” he says, “Ten million smart phones have it. If you Google, you know that Google Wallet is a hot topic. That is exactly what we are talking about: the virtual wallet. The cell phone will become a branch of our bank. You will be able purchase items from vending machines with your virtual wallet. We want to make sure this technology is extended into the gaming environment.”

Nieman envisions players carrying slot club memberships on their phones. “Any time you introduce convenience to the player and increase the gaming experience, that is good for the casino,” he says. “The convenience is there for the consumer to play to the fullest. No more ‘I left my cash at home.’ Why go to the cage to make a withdrawal? This system may even limit those who have a gambling problem.

“I think we’ve given you a glimpse into the transactions of the future of the gaming industry.”