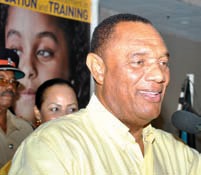 The government of the Bahamas has passed a casino gaming bill to regulate web shops, street corner internet gaming parlors patronized by locals who are not permitted to gamble in casinos.

Prime Minister Perry Christie said the country could see millions of dollars in additional revenue once the process is complete, reported Caribbean News Now. In fact, previous projections that web shop taxes would generate $12 million annually are out of date, Christie said. According to the latest figures, the government could collect more than twice that amount.

During the transition, he said, the government is projected to collect $25 million in penalties, back business license fees and application fees. Moreover, web shop operators must pay business license fees and gaming taxes for six years to make up for revenues lost when they operated unchecked. And web shops that have not been in business for five years or more will pay $250,000 for the years they have been in business.

The legislation continues to exclude locals from playing in the nation’s casinos, though they may work in them. However, a provision would allow the minister to override that clause.