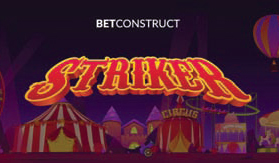 Award-winning technology and services provider BetConstruct has introduced a new game, Striker, to its iGaming Suite. In a news release, the company described Striker as “a game of luck based on our certified RNG system that delivers a provably fair gaming experience.

“The idea behind Striker is very simple: a bet is made either on a specific number from one to 99, or a range between two numbers. The end result of a gaming session reveals the winning digit. Striker is ready-made for any market.” The company said it is confident the game will perform “regardless of region … within any online gaming platform.”

Rafayel Badalyan, chief innovations officer at BetConstruct, said Striker will appeal “across a huge demographic. The idea of strength-testing games has been around for more than a century. Though in different formats, the concept of the high-striker is known almost in every corner of the world. It’s a quick and fun entertainment which can be perfectly adopted into gambling.”