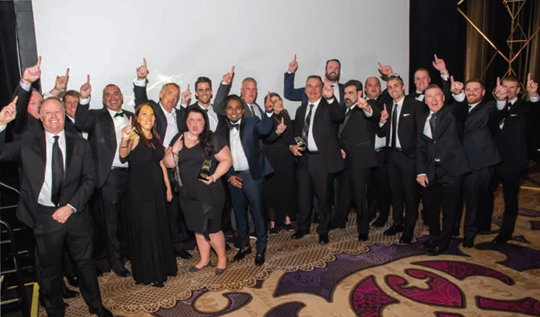 Gaming consultancy Eilers & Krejcic Gaming held its second annual EKG Slot Awards last month in a gala affair at the Cosmopolitan of Las Vegas, and for the second year in a row, the awards, which rate the best in a variety of slot-game genres, were dominated by slot manufacturer Aristocrat Technologies.

In addition to presentations of awards in all the slot categories, EKG honored Triple Play Poker inventor Ernie Moody as the second inductee into the EKG Slot Awards Hall of Fame, joining inaugural inductee Joe Kaminkow, the longtime IGT game design guru now in charge of a premium game studio at Aristocrat. Kaminkow presented the award to Moody.

The EKG Slot Awards, conducted by the top consultancy and performance analysts in the slot sector, were created to recognize excellence in slot game development. The 24 different categories of slot machines nominated for awards were determined by EKG’s principals and the firm’s Slot Awards Board of Advisors.

“There are a lot of award shows out there, but this show is all about the games,” said EKG principal Todd Eilers before the award presentations. “It is a celebration of game development.”

For the second year in a row, Aristocrat won the top award of the program, Best Overall Supplier of Slot Content. It was one of eight awards logged by the supplier—the next closest total was three, won by each Everi and Scientific Games. IGT won two.

IGT’s Ultimate X was named Top Performing Video Poker Game, and IGT was named the Most Improved Supplier-Core. While Konami was not named as award recipient, PlayStudios won Best Use of Land-Based Content in a Social Slot Game for myKonami, which is a social offering of Konami land-based titles.

Moody was inducted into the EKG Slot Awards Hall of Fame in recognition of his multi-hand poker invention, which began with Triple Play Poker and proceeded to revolutionize the video poker genre with a series of games produced in partnership with IGT, including Five Play Poker, Spin Poker, Super Times Pay Poker, Ultimate X Poker and several others.

Moody’s induction by Kaminkow, last year’s recipient, was highlighted by videos featuring many of IGT’s former luminaries, including former CEO Chuck Mathewson, longtime IGT product development EVP Bob Bittman, and Mike Fields, the executive vice president of Moody’s company, Action Gaming, a former IGT director and an executive that has been on the multi-hand poker ride with Moody for the past 14 years.

Moody, a North Jersey native, started several commercial businesses before landing in the gaming industry as part of the investor group that opened Colorado’s Gilpin Casino in 1991. He built the first prototype for Triple Play Gaming—which presents three versions of each hand with draw cards taken from three separate decks—independently in the early 1990s.

After bringing the first prototype of the game to the World Gaming Congress trade show in 1995, Moody struck the first distribution deal with IGT in 1997. The partnership is still going strong, the latest hit game being Ultimate X Poker, this year’s top video poker game.

“Ernie Moody is definitely one of the truly outstanding innovators in the video poker world,” said Mathewson in his video tribute. “His creation of Triple Play Poker, followed by Five Play, 10 Play, 20 Play, 50 Play and even 100 Play, is definitely a major contribution to the immense popularity of video poker today.”

Moody was named to the AGA Gaming Hall of Fame last October.