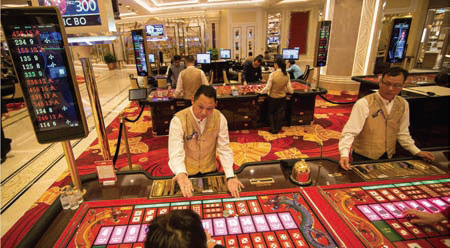 Macau casino stocks got a lift on news that the mainland Chinese government will step in to help the gaming mecca revive its flagging casino industry.

In mid-2014, after years of unprecedented and even explosive growth, Macau saw its fortunes plummet due to the government’s anti-corruption campaign, which scared off high rollers who supported much of the city’s multibillion-dollar economy.

VIP players accounted for more than 70 percent of Macau’s gaming revenues in the second quarter of 2014, a number that dropped to 55 percent during the same period in 2015. The loss of elite players has decimated the city’s junket operations and forced some operators to close up shop or consolidate their rooms. It has also caused nervousness among casino concessionaires who have invested heavily in lavish new resorts along the Cotai Strip.

Now, help may be on the way. On October 1, Li Gang, director of China’s local liaison office, told the Teledifusao de Macau TV network the Beijing government has a support plan for Macau’s predominant industry, which is now in its 16th straight month of decline. While the official did not outline the rescue plan, news reports indicate it will include measures to boost the mass market and increase tourism.

“Easing of visa restrictions, easier border crossing measures and continued infrastructure improvements could be a few that come to mind,” speculated Stifel Nicolaus Capital Markets gaming analyst Steven Wieczynski. “We still expect the VIP market to remain constrained. However, anything that the government does to support the growth on the mass side should be viewed positively.”

Easing the cap on table games would also be an obvious palliative measure, according to a note from Karen Tang of Deutsche Bank AG. Industry pundits and some casino operators including Melco Crown’s Lawrence Ho hope the government rewards companies that have invested heavily in non-gaming attractions, such as Melco’s new Studio City on Cotai. President Xi Jinping has demanded such non-gaming amenities, saying they will diversify the market and bring in more mainstream tourists.