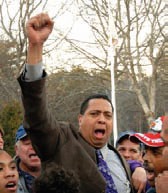 The judge in the U.S. District challenge to Massachusetts’ gaming expansion law listened for an hour to arguments from both sides last month. At stake are three casinos and one slot parlor that won’t be built, or will be delayed significantly, if the challenge is successful.

K.G. Urban Enterprise is challenging the law because it gives one of the state’s three gaming zones, the southeastern, to an Indian tribe, the Mashpee Wampanoag, without allowing any competitive bidding. The developer, which wants to build a casino in New Bedford and spent $4.5 million on the project over the last four years, calls the preference a “race-based set-aside.” “What KG needs is an opportunity to compete on an equal footing,” argued the attorney for the company.

Assistant Attorney General Kenneth Salinger countered that the set-aside was not based on race, but on politics. He argued that the law is not preventing the developer from applying, because no one is being allowed to apply until the state’s gaming commission is empaneled. No licenses will be processed before 2013, he said.

The judge, Nathaniel M. Gorton, took the case under advisement and will issue a ruling later.

The Mashpee Wampanoag, which must meet several requirements by July 31 in order to be guaranteed a license in the southeastern gaming zone if the law is upheld, still has not announced the site where it hopes to build.

The law requires that, in order to be guaranteed a license, the tribe must have land under agreement and to have successfully negotiated a compact with the state, and to have a vote scheduled in the host community.