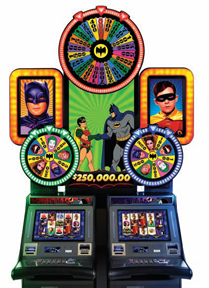 This is Aristocrat’s first game released in the new “Wonder Wheels” format, which is Aristocrat’s answer to the movie-style presentation used by the company’s main game designer, Joe Kaminkow, when Kaminkow worked at another “bat-channel.”

But where the Batman theme was the subject of two major slot games, those were based on the modern-day Caped Crusader, in the form of The Dark Knight. This new Aristocrat game uses the Wonder Wheels format—two individual slots in front of a giant bonus display with three separate wheels (one main wheel and a “Villain Wheel” for each slot), along with a surround-sound “iChair”—to recreate the campy 1960s Batman TV series, complete with all the comic-book sound balloons (“Bam!” Pow!”) and the cavalcade of top stars of the day who did guest shots on that series, which starred Adam West and Burt Ward.

The base game is a five-reel, 25-line video slot with a multi-site progressive jackpot resetting at $250,000. The bonuses are lifted directly from the popular show. The main “Dynamic Duo Wonder Wheels” feature spins the central bonus wheel as a display shows Batman and Robin climbing up the side of a building.

“Catwoman: The Purr-fect Crime” is a picking bonus featuring the classic Catwoman character as portrayed by Julie Newmar. The player picks Catwoman icons to collect credits before getting captured by Batman and Robin.

The “Riddle Me This” feature includes clips of Frank Gorshin’s unmatched performance as the Riddler in a free-game round. When the free games are awarded, with every spin two random reels will stop to display “The Riddler Box,” from which a player picks to win credit prizes, free games, multipliers, wild reels or a “Wild Slide” feature that awards additional wild symbols.

In “The Joker is Wild,” Cesar Romero’s Joker plays host to eight free games with a “Reel Ka-Power” game
layout featuring a unique 4x4x3x3x3 reel configuration with 432 ways to win.

Additionally, there are random mini-features including “Batmobile Wilds” or “Bat Signal Wilds,” which add wild symbols to the spin; and the “Villain Wheel,” in which three scattered bonus symbols spin the wheel to a credit amount associated with one of the TV series’ famous villains, or one of the show’s main characters.