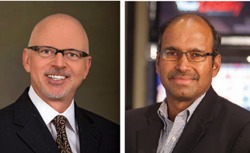 The new focus of Bally Technologies on system applications got a boost when Ramesh Srinivasan, who has headed the Bally Systems division for five years, was promoted to president and chief operating officer of the company.

In his new role, Srinivasan will be responsible for all of Bally’s worldwide games, systems and server-based solutions, as well as customer service, reporting to Chief Executive Officer Richard Haddrill.

Under Srinivasan, Bally Systems has become the market leader in the gaming systems space. Haddrill brought him to Bally from Manhattan Associates, the software firm where he was CEO before coming to Bally.

Haddrill says there will be no change in focus or direction for the company under Srinivasan. “One thing Ramesh’s leadership is doing for us at Bally,” says Haddrill, “is a mission we set out to do five or six years ago—which is to take gaming from being five to seven years behind in technology to more current. We’re bringing technology to gaming at a faster pace, which will be necessary for the industry to be competitive for the long term.”

Srinivasan’s elevation to the president/COO slot has touched off a chain reaction of management changes at Bally. Bryan Kelly, who was formerly head of the company’s Innovation Lab—the division responsible for adapting new applications in the general IT space for gaming use—has been promoted to senior vice president of technology, also reporting to Haddrill. He will continue to lead Bally’s technology innovation efforts as well as networked gaming.

In other executive moves, Bally promoted Derik Mooberry to senior vice president of products and operations, reporting to Srinivasan. Robert Parente, who joined Bally in 2009, has been promoted to vice president and managing director of Canada to lead all of Bally’s activities in that market.

Haddrill says the new management team will stay the course on technology, but will focus on communication. “We expect improved communication, teamwork and execution,” Haddrill says, “and the ability to provide a better customer experience, by becoming more focused and efficient through this reorganization.”