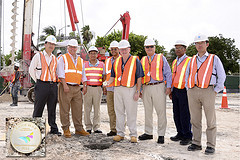 Baha Mar, the largest single-phase resort development in the history of the Caribbean, celebrated another milestone with the driving of the first of 5,700 pilings in late June, in Nassau, the Bahamas.

The event, which marks the beginning of construction for Baha Mar’s core project, was witnessed by officials from the Bahamas Ministry of Works and executives from Baha Mar. The ceremony included the embedding of a gold commemorative Baha Mar coin as a symbol of good luck for the $3.4 billion resort, gaming and entertainment complex slated to open in late 2014.

“With the start of construction on our core project, Baha Mar continues on its planned timeline to deliver the largest resort development presently under construction in North America,” said Baha Mar President Don Robinson. “Today’s ceremony is yet another milestone in the development of a project that is vital to the economy of the Bahamas, and will go a long way to help address the current economic challenges facing the country. The realization of Baha Mar is due in large part to the confidence and strong support given by the Bahamian people and the Bahamian government.”

The placement of the first piling of the core project is another significant accomplishment in the construction phase of Baha Mar. In February, Baha Mar held its groundbreaking ceremony, and in the intervening four months, significant work has been done on both a new “Commercial Village” and substantial road works surrounding the resort, both of which are slated for completion by November. In addition, Baha Mar has so far provided employment for almost 900 Bahamians, and has awarded over $90 million in contracts to Bahamian firms.

Baha Mar is an example of a collection of diverse international partnerships. In addition to securing a number of internationally recognized brands as hotel partners, Baha Mar has appointed China State Construction and Engineering Corporation as its general contractor, and has secured project financing from the Export Import Bank of China.