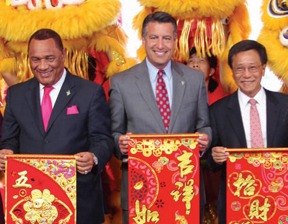 A delegation from the government of the Bahamas was in Beijing, China in July to foster negotiations between the Chinese government’s construction company and its client, Baha Mar, Ltd., that can salvage the relationship between the two and restart construction on the .5 billion Baha Mar resort on Nassau’s Cable Beach.

The delegation was formed as a last resort before the Bahamian government takes over the troubled project. The Supreme Court of the Bahamas refused to recognize the U.S. bankruptcy petition of Baha Mar Ltd., which filed for U.S. Chapter 11 bankruptcy protection as a way to finish the delayed mega-resort project.

Baha Mar requested that the Bahamian high court recognize the U.S. bankruptcy filing, which listed unaudited assets of $3.1 billion and debts of around $2.7 billion.

The company is seeking approval of a U.S. Chapter 11 restructuring plan that includes $80 million in new financing to be arranged by Baha Mar CEO Sarkis Izmirlian, which would be used to operate during completion of construction. The U.S. bankruptcy also would protect the company from creditors taking action against the developer in the Bahamas.

After delaying a decision for two weeks, the Bahamian court held that completion of the project—which Prime Minister Perry Christie has said is of “national urgency” as the best hope of reviving the Caribbean nation’s economy—should be settled by a Bahamian court.

“Our government has argued firmly that a Bahamian court, supervising the work of an independent liquidator, is best suited to oversee the restructuring, completion and opening of the resort should Baha Mar, China Construction and Exim Bank be unable to reach an out-of-court agreement,” said a statement from the government.

The Chinese state-owned contractor also has opposed the U.S. bankruptcy, filing suit in a U.S. court in an attempt to block it.

Christie said he will pursue liquidation proceedings to seize control of Baha Mar and complete the project, to protect the jobs of some 2,000 Bahamian nationals. (The court had yet to appoint a liquidator at press time.) “The provisional liquidator would be lawfully bound to have regard to the best interests of the Bahamian people, Baha Mar employees, Bahamian contractors, creditors and investors in Baha Mar,” the statement said.

In a statement, Baha Mar officials called the decision “disappointing,” and questioned whether it was in the best interest of the employees. “We do not believe today’s ruling, for which the government strenuously argued, assures the necessary protection of the assets of Baha Mar, and we do not believe that it is best for the over 2,500 current employees of Baha Mar,” the operator said.

“We will lend $200 million alongside (Exim) on a 50-50 basis into a new senior facility totaling $400 million that will fund the completion, opening and stabilization of Baha Mar,” Izmirlian wrote to Liu Lange, president of the Chinese bank, according to the report. Christie was copied on the letter.

“Assuring the prompt resumption, completion and opening of the development is fundamental to protecting our national interest,” said Christie in a statement. “The most effective way to preserve the livelihood of Baha Mar’s workers, protect investors and realize the project’s great economic promise for all the Bahamas is to ensure the completion and opening of Baha Mar as soon as possible.”

The negotiations prompted by the Bahamian government delegation between Baha Mar, China Construction and Exim bank in Beijing did not start well, with the parties exchanging statements blaming each other for the debacle.

Before negotiations, CCA issued a press release in which it offered to invest $100 million in the project and provide a guarantee o $175 million to the Exim bank, and called on Baha Mar Ltd. to do the same to finish the project.

Baha Mar quickly rejected the offer, saying it wants no part of a resolution that includes the construction company gaining more equity in the project.

“CCA in its release cites not a viable proposal on its part but rather a distortion of an old posture that made discussions to negotiate a consensual resolution with it as one of the parties a sham,” Baha Mar said in a statement. “It is why we came forward and made our very viable proposal directly to the Export-Import Bank of China.

“It is interesting that when a very viable proposal is put forward by Baha Mar Ltd. to the Export-Import Bank of China, a proposal which provides for a significant equity infusion by the Izmirlian family to complete and open Baha Mar and would utilize Bahamian contractors and a Bahamian workforce to properly finish the work at Baha Mar that CCA failed to do, CCA issues a highly defensive and apparently panicky press release,” Baha Mar said.

“CCA should be concerned. No matter how CCA tries to spin it and no matter how often it tries to deflect from its lack of responsibility, it cannot cover up the sad pattern of its failing to perform properly at Baha Mar and other important projects in the Bahamas as well…

“CCA failed to complete Baha Mar repeatedly on the timetables it set, its work has been called into question, it walked off the job, its failure to perform caused Baha Mar to have to seek Chapter 11 protection and it has been uncooperative in working toward a consensual resolution.”

In an interview with journalist Jeffery Lloyd, Izmirlian said the contractor is solely to blame.

Just months prior to the second opening date of March 27, CCA was pledging to open on time, according to Izmirlian.

“In January they promised the prime minister of the Bahamas that they would be open by March 27,” said Izmirlian. “We had a board meeting where the China State Construction representative voted as a board member to open Baha Mar on March 27 because it would be completed and they didn’t do it. For two years now we’ve been telling the bank and senior management of China State Construction that they needed to make changes or we were going to have the problem we are having today. In the past 18 months I have written nine times to the chairman of the Exim bank and to the chairman of China State Construction asking for their help. And not once did they follow our recommendation. And so there is a failure of the general contractor.”

CCA, meanwhile, continued the war of words with its own statement, blaming Baha Mar Ltd.’s failure to develop an adequate master plan for the delays.

“BML is bankrupt because it repeatedly made mistakes in the development of Baha Mar,” the statement said. “Their attempts to place blame on CCA Bahamas are self-serving explanations to deflect attention from their own negligence and mismanagement of the resort’s development.

“However, despite their serial missteps and purposeful avoidance of its contractual payment obligations, we are once again offering to provide financial assistance to help save Baha Mar and create thousands of jobs for the Bahamian people.”

“We can go back and point the finger at each other as to why we missed the December deadline,” he says. “I have arguments and they have arguments. I happen to think mine are real and theirs are made up but be that as it may, why did we miss the March 27 deadline? When they stood in front of the prime minister of the Bahamas in January in Beijing they said Baha Mar will be open on March 27 to receive guests. They didn’t say maybe, they didn’t say Sarkis can’t manage the business, they didn’t say we had changes; they didn’t say all the myriad of excuses they have come up with since then. They said we are going to be open.”

In July, Christie sent a delegation to Beijing, China, to foster negotiations between Baha Mar and its Chinese contractor, in a last-ditch effort to jump-start construction and complete the project. No agreement was reached, and the Bahamian government is expected to initiate liquidation proceedings.

The statement issued by Baha Mar following the government’s liquidation efforts was direct.

“The government’s entire application is misguided and without merit, and the whole process is abusive, oppressive and undertaken in bad faith,” the company said. “We look forward to demonstrating those facts to the court. Moreover, it should be clear to the entire country that the government’s actions do not serve the best interests of the Bahamas and its people. Those interests are best served by the completion and opening of the resort, a process that the Winding Up Petition (the liquidation effort) will only undermine and delay.

“Moreover, the government’s hastily submitted application contained numerous fatal flaws in procedural terms. Those errors were then compounded by their last-minute announcement that the persons they had proposed to act as provisional liquidators were, in the government’s revised estimation, unsuitable.

“Considering the hundreds of Bahamian and international creditors and other parties involved in this situation, it is both necessary and appropriate that we have time to satisfy ourselves that the proposed individuals are truly independent and conflict-free, regardless of the caliber of the firm the government has identified.

“We are concerned that the government’s continued actions are only serving to distract the parties from the negotiations that are continuing, where we are making real, if slow progress, and to which we have always been committed. Our unwavering aim is to reach an outcome that enables Baha Mar to complete construction and open the resort to the benefit of the Bahamas.”

Rumors in the Bahamas continue to surface that Christie’s endgame is to turn the property over to Genting of Malaysia. The company operates a small casino on the Bahamian island of Bimini. The ownership of Baha Mar would fold well into the company’s plan to deeply penetrate the U.S. market, where it operates the nation’s highest-earning casino, Resorts World New York at Aqueduct raceway, and has broken ground on Resorts World Las Vegas on the Strip. At that groundbreaking, Christie and other Bahamian officials participated in the ceremonies.

The Baha Mar project was heralded as the savior of the Bahamas economy when ground was broken in 2010 for what was being called the “Bahamian Riviera,” promising to revive the legendary Cable Beach coastal resort. Four new hotels are being added to the two existing resorts, along with the largest casino in the Caribbean, to be managed by Global Asset Management, made up of former executives in the Las Vegas Sands organization.

The completed resort would employ more than 5,000 people in the Bahamas, where the unemployment rate is 16 percent, and boost its gross domestic product by about 12 percent. CCA Bahamas Ltd., the construction manager for the project, estimated the resort could be completed for next year’s winter high season if construction can be resumed quickly.