The recent woes of Atlantic City are only a blip in the long history of that town and its relationship with gambling. 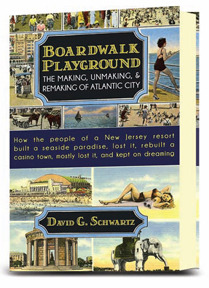 The news couldn’t get much worse for Atlantic City. From four casinos closing in 2014 to a potential threat of gaming expansion in North Jersey to a possible city bankruptcy, the Boardwalk town has hit bottom… again.

Atlantic City was founded in 1854 as an escape from the summer heat for the rich people of Philadelphia. A rail line linked the two cities and Atlantic City began to thrive for its pristine beaches, clean ocean air, and very quickly, its somewhat shady reputation where anything goes.

David Schwartz is a native of Atlantic City, the son of a very prominent Atlantic City journalist, and today the director of the Center for Gaming Research at the University of Nevada, Las Vegas. The author of many books on gambling, he recently returned to his roots with the release of Boardwalk Playground: The Making, Unmaking and Remaking of Atlantic City.

The book is largely a collection of essays Schwartz wrote for Casino Connection magazine, when it was a print publication in Atlantic City (published by the parent company of GGB). It recites history, culture and politics of the city since its founding through the casino era.

Schwartz is true Atlantic City. A graduate of Atlantic City High School, one of his first jobs was dressing up as Mr. Peanut and shilling Boardwalk visitors to buy some. Later, he worked in several casinos in Atlantic City before becoming one of the most preeminent academics in gaming.

He says Atlantic City has always been involved in gaming—legal and illegal. During the first half of the 20th century, it wasn’t hard to find action in the city. The legendary 500 Club where Dean Martin and Jerry Lewis met and developed their act and where Frank Sinatra played had a widely known casino in its back room.

So it wasn’t such a surprise when Schwartz discovered a little-known fact about Atlantic City gambling.

“Doing research for the book, I discovered that the first proposal to legalize gambling in Atlantic City came back in 1936,” he says. “So for a long time, legalizing gambling and making it a balanced approach was part of the Atlantic City mentality.”

The advent of hard times caused the drive for legal gambling to heat up. The debacle that was the 1964 Democrat Convention held in Atlantic City was rock bottom. Solutions, including gambling, were considered starting in the late 1960s.

“When gambling was illegal in Atlantic City,” says Schwartz, “you had groups that were in power that benefited from that, your Nucky Johnson types (the inspiration for Nucky Thompson in HBO’s Boardwalk Empire). There were always reformers, but they didn’t really get the upper hand until the 1950s, for a variety of reasons, most not even specific to Atlantic City.

“But people didn’t realize that quickly. In the 1960s, there were groups that wanted a change, which included legalized gambling. Las Vegas was doing great and Atlantic City wanted to be like that. And incredibly in the mid ’70s, they were able to convince the rest of the people in New Jersey that Atlantic City needed help, and this was the best way to provide it.”

But even then they couldn’t get it right. The first referendum, held in 1974, would have legalized gambling throughout New Jersey. Voters rejected that because most of them didn’t want a casino in their backyard. So two years later, advocates were back with a measure that legalized gambling only in Atlantic City.

“It shows how impulsive it really was,” says Schwartz. “They didn’t

really think about it until it lost in ’74. They didn’t think if it worked in

Atlantic City that someone else would try it. In ’76 they had a better approach with more specifics and limited only to Atlantic City.”

And now that politicians in North Jersey want to legalize casinos outside of Atlantic City, Schwartz has advice for them.

“You’ve got to look at the unintended consequences of what you’re proposing,” he says. “You’ve got to look at it from all angles, because definitely the voters will. And second, try to be as specific as possible. The reason the referendum worked in ’76 is because the message was very clear: Help Atlantic City help itself. Sure, it was nice that the seniors would benefit with prescription drug discounts, but you allowed voters to give Atlantic City some leeway. That is why it was successful, and that is what would help this referendum pass too, or lose if they fail to do that.”

Whatever happens with the vote, Schwartz is confident Atlantic City will survive.

“Atlantic City has reinvented itself time and time again,” he says. “There’s nothing to suggest that won’t happen again.”

Boardwalk Playground can be found at all the usual outlets, including Amazon, and the Mob Museum and Gamblers Book Store in Las Vegas.