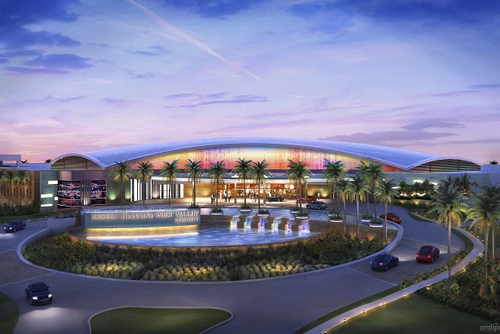 Despite opposition, the Tohono O’odham Nation plans to move forward with its plans to build a casino next to Glendale, Arizona, and recently released updated renderings of its proposed West Valley Resort. The tribe worked with local community members, business groups and elected leaders for two years to create the resort’s new look.

The revised renderings show the West Valley Resort would conform to the architectural character of the region, said Tohono O’odham officials. Specifically, the gaming facility has been moved to the opposite side of the property from where a high school is located. In addition, the new design fits into a smaller portion of land that had been the subject of a dispute between the nation and the city of Glendale, thereby avoiding the disputed area and preventing construction delays.

Tribal leaders said the project will create 6,000 construction jobs and more than 3,000 new permanent jobs when completed. It is expected to have an annual economic impact of $300 million and attract 1.2 million visitors to the area.

Arizona Governor Jan Brewer recently signed a bill that would permit the city of Glendale to annex, without tribal consent, the 54 acres of land the Tohono O’odham Nation owns near the city’s sports and entertainment district. The move would make the land ineligible to become part of the tribe’s reservation, which is required for the operation of a tribal casino.

Tribal leaders and several legislators have said the bill is unconstitutional because it violates property rights and was drafted specifically for Glendale. The tribe is pressing for quick federal action because the law will not go into effect until 90 days after the legislature adjourns.

Tribal Chairman Ned Norris said, “I was pleased to see so many senators acknowledge that the bill is unconstitutional and stand up against party leadership for what’s right. The Tohono O’odham Nation has played by the rules with the West Valley Resort and now opponents are using their influence to unconstitutionally change the rules, and only as they apply to the nation.”