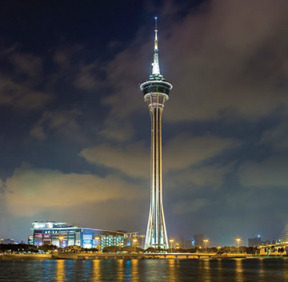 The world’s No. 1 gaming mecca is back in business.

Following an unprecedented two-year slump—some analysts called it a recession—China’s only legal gaming jurisdiction seems to be pulling out of a graveyard spiral. The uptick started in August, when gross gaming revenues turned positive for the first time in 26 months. The numbers for September continued the positive trend. October beat expectations and landed the city squarely in the black.

The good news coincided with the openings of two new mega-resorts on the city’s glittering Cotai Strip, Macau’s answer to the iconic Strip in Vegas. Wynn Resorts’ $4.2 billion Wynn Palace debuted in August, followed by the $2.9 billion Parisian Macao, a Sands China property, in September. They joined a growing cluster of new properties on Cotai including Broadway Macau, a Galaxy Entertainment property that opened in January 2015, and Melco Crown Entertainment’s Studio City resort, which cut the ribbon in October of that year.

And there’s more to come: a new $3 billion casino resort from MGM China will open next year, and SJM Holdings’ $3.9 billion Grand Lisboa Palace will round out the Cotai offerings in 2018.

Macau’s historic downturn began in mid-2014, when Chinese President Xi Jinping ordered a crackdown on corruption, graft and money laundering in the city. That campaign sent VIP players and junket operators heading for the hills (and other jurisdictions). At the same time, Xi ordered the city to diversify its economy beyond gaming. Operators have responded. Studio City has a Hollywood theme and includes family-friendly entertainment like a Batman virtual reality ride. Pundits have speculated that tourists will spend less time gambling at the Parisian than taking selfies in front of its half-scale faux Eiffel Tower.

The Grand Lisboa Palace will have its own theme park. Angela Leong, an executive director at SJM Holdings, says VIP play will be all-important to the resort’s success, but it will concentrate on mass play.

“The direction we’re going is that we have to make the hotel residents here spend more at the property,” Leong says. “We cannot really go always for the very high-end customer.”

Tourism to Macau broke records during the October Golden Week holiday, which drew more than 190,000 visitors a day to the MSAR. Hotel occupancy for the month hit 92 percent of capacity, even though new resorts added 6,000 rooms to the city. Occupancy at five-star hotels increased 5.5 percent to more than 94 percent of capacity. It all adds up to a big plus and renewed optimism in the jurisdiction. The slow and steady improvements in mass market traffic and the gradual return of VIPs could mean sustained buoyancy for Macau.

But many analysts have asked if this is a true rebound or merely a bump linked to new openings on Cotai. And the October arrests of 18 Crown Resorts employees working in mainland China, including Executive Vice President Jason O’Connor, promised to have a chilling effect on the industry in Macau and around the world. The Crown staffers were reportedly in China to drum up VIP business for the company’s Australian casinos. It was a big mistake, and in flagrant defiance of mainland laws. The arrests threw a scare into operators and investors, and could have the potential to drive down VIP and premium mass play at least for the short term.

One informed observer—Steve Wynn—declined to forecast a quick rebound for Macau. Before the opening of his lavish, VIP-oriented Wynn Palace, he said, “The last two places that opened did not cause the market to grow, did they? No. Will this one? Good question. I’m anxious to see myself.”

Meanwhile, the Cotai Strip seems to more closely fit Xi’s definition of a tourist destination with staying power. It has more to see and do at a number of price points. That’s just what the Xi government wants to see.

Needless to add, two months of gains does not make a recovery. The openings on Cotai added a total of 4,700 guest rooms and more than 200 new retail outlets to the city, but it may not be all smooth sailing from here. Galaxy Entertainment Chairman Lui Che Woo has said he will not call it a recovery until the city’s main industry sees two full years—not a few months—of progress.