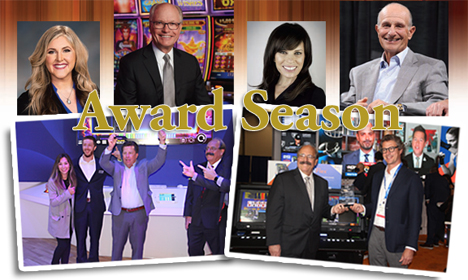 The winners of the 20th edition of gaming’s most respected technology awards were announced just prior to G2E by Global Gaming Business magazine. The GGB Gaming & Technology Awards are the only awards that recognize excellence in innovation and practical application in all gaming disciplines. Hundreds of gaming products and services were entered into this year’s important competition.

The gaming industry was shut down for much of 2020, but the development of new products, games and services continued. As a result of the pandemic, the program added a new category, Best Guest Health & Safety Product, which will continue with the 2023 edition.

“We were overwhelmed with the quality of the nominations for the GGB Gaming & Technology Awards this year,” says Roger Gros, publisher of Global Gaming Business. “The innovation has accelerated and the recovery from the pandemic will also accelerate as a result of the effectiveness of these products.

“As technology advances at a rapid pace, it’s often difficult to evaluate the most innovative and unique products. The judges for the GGB Gaming & Technology Awards are some of the most skilled, dedicated and respected executives in the business, so their opinion carries a great deal of weight. The winners of this year’s edition beat out some amazing competition and demonstrated true innovation.”

The awards were presented at G2E at the Venetian Expo and Convention Center in Las Vegas.

Nominations for the 2023 GGB Gaming & Technology Awards will open in May 2022, and include new products and services to be introduced in 2022 or 2023.

(View a video presentation of the G&T Awards 2022)

With no ceremony in 2020, the American Gaming Association honored two classes of the Gaming Hall of Fame at G2E this year

At this year’s G2E, the American Gaming Association (AGA) inducted two classes of the Gaming Hall of Fame, 2020 and 2021. It recognizes leaders who have distinguished themselves through significant contributions to the gaming industry.

“Each of these pioneers has left a unique, indelible mark on our industry,” said AGA President and CEO Bill Miller. “Under their leadership, tribal gaming has boomed, professional sports leagues have embraced sports betting, and the gaming industry is thriving despite the challenges we’ve faced over the past year and a half.”

Since its establishment in 1989, the Gaming Hall of Fame honored an annual class of industry leaders, until last year, when the selection and the event were postponed due to the Covid-19 pandemic. The Classes of 2020 and 2021 were honored during a ceremony at G2E’s Chairman’s Reception.

“This year’s honorees have been key players in proving that gaming is a world-class entertainment experience,” said Aristocrat Technologies CEO and AGA Chairman Trevor Croker. “We’re proud to recognize them and the important role they’ve played shaping gaming into the dynamic industry it is today.”

Hall of Fame honorees are selected by an independent panel of gaming executives. This year’s selection committee members include:

Knute Knudson, Jr. has dedicated his career to tribal gaming and the entire Indian community, serving as an advocate, mentor and transformative business leader. His efforts have influenced the success of hundreds of tribes as they established and expanded their Indian gaming operations across the U.S.

In his early career at the U.S. Department of the Interior, Knudson led efforts to implement the Indian Gaming Regulatory Act, working on compacts, trust applications and National Indian Gaming Commission appointments. He played an integral role in securing economic self-sufficiency for Indian Country throughout the 1990s, and authored Getting Started in Indian Gaming, which became the blueprint for the first decade of tribal gaming startups. Knudson is recognized across the industry for the vital role he played and continues to play in the growth and economic modernization of tribal gaming.

Jeremy “Jerry” Jacobs is a pioneer of gaming and hospitality. He is currently chairman of Delaware North, owner, chairman and governor of the Boston Bruins, and chairman of the National Hockey League’s Board of Governors.

Jacobs is credited with leading the transformation of Delaware North into a global company with roots in gaming, hospitality and entertainment.

From casino gaming in its early days to sports betting today, Jacobs has helped stakeholders understand the benefits of the industry to the economy and communities. He built coalitions of competitors who shared the same goals and always played the long game, which is reflected in today’s thriving, modern gaming industry. This is most evident in the NHL and sports leagues’ transformation on sports betting.

Jacobs is enabling critical partnerships among gaming operators and the leagues and franchises by educating colleagues on the mutual benefits of sports betting. The more than 200 sports-gaming partnerships today would have been inconceivable when Jacobs started his career, but his vision and commitment to gaming’s growth paved the way.

James R. Maida is a legend in the casino business. As a lawyer in the New Jersey regulatory system, he quickly saw his agency overwhelmed with requests to test slot machine systems—so he began to do it himself out of a spare bedroom in his apartment.

Maida started Gaming Laboratories International (GLI) in 1989, and has grown it into an international company serving the needs of the industry and regulators alike. Through Maida’s innovation at GLI, jurisdictions everywhere have embraced gaming, unencumbered by the burden of establishing, running and continually funding their own government-run labs.

Jeffrey A. Silver’s contributions to gaming, and specifically Las Vegas, reach every aspect of the industry, from regulatory to casino operations to legal.

Silver first made his mark in gaming when he took a stand against organized crime as a member of the Nevada Gaming Control Board, and subsequently laid the foundation for corporate investment in gaming. His reputation opened the door for innovation when he took on leadership roles at various Las Vegas casino resorts.

Silver is attributed with bringing the first food and beverage corporate partners into the casino, leading “the Burger King Revolution” that was key to driving middle-class tourism to Las Vegas in the 1980s. Silver’s third act as an internationally recognized lawyer and trusted adviser has helped shaped today’s global landscape.

As a Ph.D. in mathematics, Yoseloff created classic games like Mississippi Stud Poker and other legendary table games. The owner of hundreds of gaming patents, he led Shuffle Master from a small shuffling-machine company into an international giant introducing groundbreaking products and services to the casino floor. Yoseloff then used his talents to create the Center for Gaming Innovation at the University of Nevada, Las Vegas, to teach the next generation of game creators.

His internationally acclaimed program has led to the creation of countless new games and patents—all owned by his students, to empower them on their path into the gaming industry.

In an October 6 ceremony at Wynn Las Vegas, Global Gaming Women (GGW) honored a select group of women with the Patricia Becker Pay It Forward Award. Recipients were recognized for their commitment to women’s professional development and advancement and other philanthropic efforts.

The 2021 Patricia Becker Pay It Forward Awardees are:

Katie Lever has been a dedicated supporter of GGW since its inception, and led the creation of its initial mentorship platform. A member of the board since GGW became a charitable organization in 2015, Lever has been an invaluable part of fundraising efforts, which have enabled GGW to expand its impact across the industry.

At the height of the pandemic, Lever created a new online series, “Trailblazers, Power of Questions,” to offer inspiration during the shutdown as well as ongoing opportunities for development. She has been a champion, role model and mentor for women in the industry.

Since joining GGW in 2014, Alisia Pulella has been an invaluable asset, helping bring GGW its first major event, “The Power of the Suit.” She is an active member of the Mentorship Committee, was a founding moderator of GGW’s Lean In Circles, served as a coach for new moderators, and hosted numerous Lean In Mixers.

In 2020, Pulella leveraged her coaching experience, her industry connections and her passion for others to create GGW’s Virtual Master Class Series, which offers continuing education, discounted professional services, and ongoing connection of industry experts to women around the world.

In 2020, GGW struggled to determine how to produce and offer classes and member support during the pandemic. That’s when Kate White stepped in to establish new technology options for GGW programs. White helped streamline some operational efficiencies of the organization and created analytics around GGW members and programming to share the value of the organization with others.

She has participated in many Lean In Circles, and remains a tireless advocate of the Circles, which help professional women in gaming keep in touch.

Lauren Bates, who joined the GGW board in July 2018, is currently the board’s second vice president and co-chair of the Mentorship Committee. At the beginning of the pandemic in 2020, she helped transition that committee to online deliverables, including the GGW Master Class Series. She also engaged with women through Lean In Circles, ensuring consistent communication and support during a turbulent time, and worked to re-engineer content in the changing work environment.

In 2020, Bates, her co-chair and the international group All In Diversity hosted 400 attendees for a two-day Zoom event. That event led to the formation of additional Lean In Circles this year, including the first international circle.

With 6,000 members in 42 states and 12 countries, GGW works to support, inspire and influence the development of women in the gaming industry. GGW brings together women from all segments of gaming to enrich their professional and personal lives.