With value engineering and the advice of an asset manager, casino resorts can get a bigger bang for each investment buck 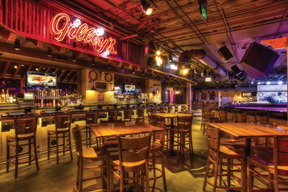 It’s been 35 years since John Travolta rode a mechanical bull to fame in Urban Cowboy. But the scene of that movie triumph—the iconic country-and-western bar Gilley’s—is still packing them in. In June 2014, a Gilley’s opened at the Nugget Casino Resort in Sparks, Nevada. Since then, it has helped to reinvigorate the whole property.

The change was long overdue. Gilley’s opened on the site of a ’70s-era tiki bar called Trader Dick’s. Dick’s Polynesian theme, giant fish tank and trademark mai tais had worn a little thin; swapping it out for a Gilley’s “not only created a lot of excitement, but also brought the average age of our customer down significantly,” says Cory Morowitz of Global Gaming & Hospitality, an advisory and investing firm that acquired the Sparks property in 2013.

The choice removed a threadbare, underperforming amenity and replaced it with a cross-functional destination with built-in appeal; the franchise, officially known as Gilley’s Saloon, Dance Hall and B-B-Q, has locations in Texas, Oklahoma and Las Vegas. It serves up both F&B and a full slate of entertainment: live country music, line dancing, bull riding and hot cowboy contests—not to mention those winsome Gilley Girls, clad in bikinis and black leather chaps.

That’s not all. The 10,000-square-foot site at the Nugget also includes a retail outlet, the Trading Post, which sells cowboy boots and logo gear. Gilley’s famous barbecue menu has also made fans; the chow recently won an overall 4.6 rating (out of 5) on OpenTable.com, as commenters raved about the St. Louis-style ribs, chiliburgers, barbecue wings and Tex-Mex food, along with specialty drinks like the Texan Tramp.

These days, every non-gaming ingredient matters to a resort’s success. But food and beverage is among the most important, particularly in locals destinations, where repeat business is key.

“We’ve noted in our research that in any market, the casinos with the best F&B product are normally the market leaders in terms of revenue or profitability,” says Morowitz. His firm, which provides strategic turnaround and asset management services for the gaming industry, has helped a number of clients “change the customer experience, particularly through food and beverage and entertainment experiences.”

The changes in Sparks—which also included a renovated casino floor, a new modern sports book and a revamped customer loyalty program—seem to be paying off. “The market is growing at 3 percent, and we’re growing at more than double that,” says Morowitz. “Our EBITDA has responded significantly, over 300 percent growth or maybe more in one and a half years.”

In a mature, fiercely competitive industry, it’s a model for capital investment. During the recession, many casinos were forced to stop spending beyond simple maintenance. And they remain cautious. “We have low or negative growth in most markets except those that are new and coming online, like Maryland, Massachusetts or Ohio,” says Morowitz. “But making targeted investments and strategic and tactical changes can still result in positive improvement.”

An especially successful project that was cost-efficient and also got high marks from customers was the renovation of a buffet at the Majestic Star Casino in Gary, Indiana. Like many properties, the Lake Michigan riverboat faced strong headwinds during the recession, and sought bankruptcy protection in 2009. In 2011, the property founded by the late Don Barden emerged under the ownership of former majority creditor Wayzata Investment Partners, a private equity firm in Minnesota.

GGH’s Gary Shpritz, former VP of design and construction for the Cordish Companies, led the renovation. Starting with “a very limited wallet,” Shpritz was charged with transforming the Passports buffet, which looked out onto the lake but actually obscured the panorama with a mural wall and other impediments. The space reopened in July as the Harbor View, with an expansive 360-degree sightline that “embraces the view and brings the outside in,” says Shpritz.

To further open up the space, Shpritz reduced the circumference of load-bearing columns and relocated salad and dessert bars which had been pushed up against the walls to a central buffet line. Instead of replacing the buffet chairs, tabletops, banquets and bases, Shpritz minimized costs by reupholstering and re-laminating—and saved $50,000 in the bargain. In an especially customer-friendly move, he added LCD monitors to each section of the buffet line. “Now patrons aren’t just waiting in line, they can enjoy their experience,” checking the menu boards, watching chefs preparing the food, or reading about upcoming specialties, he says. “They can see what will be there tomorrow night, or Friday and Saturday night,” and hopefully be inspired to return.

This is Value Engineering 101, “doing the homework to find the most cost-effective finishes” and taking other measures that trim the expenditures but do not compromise quality or the guest experience, says Shpritz. “A high-priced designer could spend $100 a square foot on tile flooring from Israel, and I could get it from Altoona, PA for $20 a square foot. It’s all about being resourceful when it comes to value design and engineering.”

So, is value engineering just a fancy way to describe upgrading on a shoestring?

Not quite. The Society of American Value Engineers defines “value methodology” as a “systematic and structured approach for improving projects, products, and processes … (that) helps achieve an optimum balance between function, performance, quality, safety and cost.”

SAVE has reduced it to an equation: “Value = function/cost value.”

The approach is more important in the post-recession era, which has seen a fundamental shift away from the old-time casino owner-operator—the head honcho who called all the shots and usually had the money to lavish on capital investments. In many cases, that archetype has given way to a more complex alliance of owners and investors along with evolving operating models, says GGH Managing Partner Michael Kim.

“Obviously, you’ve got to think about this in the context of last 20 years versus the last seven,” Kim says. “A lot has happened, driven largely by the dislocation in the financial markets, the correction and the Great Recession. The industry has shifted ownership from the traditional model like Steve Wynn to include a number of financial institutions, whether they be banks or hedge funds or equity funds; institutional investors have moved into the ownership position.”

This chasm between ownership and operations comes with built-in disadvantages: it can lead to management by committee, and possible standoffs on critical investment decisions. But it has also created a new and perhaps more essential kind of asset manager, typically a third-party consultant who acts as a liaison between owners and operators and “develops broad strategies to align the interests of all vested parties,” Kim says.

“Theoretically, the owner wants to spend as little as possible, and the operator wants to spend as much as possible. The asset manager acts as a bridge between two sides that sometimes are diametrically opposed. There needs to be somebody that says both sides have a point and there is a middle ground.”

Say the operator wants a $2 million renovation. The owner comes back with a $1 million budget, so their goals don’t align by half. The asset manager can encourage the parties to meet in the middle and get the job done for about $1.5 million.

“It’s not to challenge or restate the whole model, because everyone accepted that we are going to do this,” says Kim. “The question is, can we value-engineer to get the cost of this down to as efficient a level as possible without losing the experience of the product?”

In short, it’s the asset manager’s job to identify ways to enhance the value of core operating assets through strategic deployment of capital in order to drive revenues and increase profits. He or she also measures the results of capital investments, and develops a Plan B if or when the returns do not match the expectations.

Incidentally, Kim adds, the loss-leader concept—accepting a loss or a break-even on F&B, hotel, entertainment and other nongaming elements, because they drive gaming—may be going the way of the great and powerful owner-operator. Today, every asset must pull its weight.

So, how does an asset manager make his or her recommendations? First, add paperwork (data research) to legwork (field study). Morowitz, for example, says he has visited more than 200 properties in the last several years in the interest of advising his clients.

“When you’re working for somebody, you want to live in that market for a while, so you can understand what’s working and what’s not working. I’ll literally sit at a bar and talk to people, ask them how often they come and what they like (about a property). Security guards are good; they can give you lots of information. I talk to employees to get a better understanding of the market, find out when the crowds are coming, where they go, what they do. There is also some customer survey data we leverage from focus groups casinos have done.”

He also surveys the types of products casinos offer, including gaming, dining, hotel and entertainment, and learns who leads in gaming revenue. “If we can get profitability numbers, we can make inference from that kind of qualitative and quantitative research. It’s a combination of survey work and just good old-fashioned driving around and observing different properties.”

It is also market- and consumer-specific—the opposite of the bigger-means-better, “build-it-and-they-will-come” approach, which has become obsolete, he adds. “In the earlier days of Atlantic City, for example, there were always untapped markets, so if you wanted to generate revenue from Pittsburgh or Virginia, you would just build more rooms. In those days, capital expenditures, if they were well-executed, generally led to revenue increases and decent returns. While the days of building hotel towers and big retail projects are not over, it’s not the rule anymore, it’s the exception. Las Vegas is a great example of spending a lot of capital, and it hasn’t always worked out.

“You have to spend in this business, but you’re looking for relatively low-capital impact with a high return—you have to make do with what you have, and also make it better.”

To put it more simply, always get the tile from Altoona.