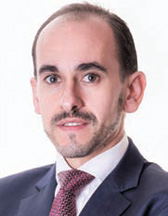 Carlos Eduardo Coelho grew up in Coimbra, Portugal, some 130 miles northeast of Lisbon. He graduated from the town’s law school after studying corporate law. He loved his hometown. So why move to Macau, a former Portuguese colony halfway around the world?

It certainly wasn’t on his radar.

Coelho worked as a lawyer in Portugal for several months but wanted to go abroad.

“I had a few opportunities, and then was invited to come to work in Macau. I thought, ‘Why not?’ I was sure it would be a good experience,” he says.

In Macau, gaming is ubiquitous. The industry is the main employer, accounting for more than half of GDP and around 80 percent of fiscal revenues.

“It’s very unlikely to be a lawyer in Macau and not have exposure to gaming. If your clients are not related directly to gaming, they’re related indirectly,” Coelho says.

After several years employed by a major shareholder of a gaming company, Coelho shifted to gaming manufacturers, which helped him better understand the industry. “I met people from different jurisdictions, so it was a natural evolution.”

As senior associate with MdME Lawyers, Coelho focuses on mergers and acquisitions and other transactional corporate law. He also does advisory work with different kinds of corporations and financial institutions, advising on restructurings, regulatory compliance and capital markets.

He has not relied for his success on a single mentor, but says he got good advice about his Asian adventure from those closest to him, starting with family.

“I’ve also been lucky enough to work with very demanding professionals, which made me learn a lot—including what not to do, which is of extreme importance. I’m sure I’ll still learn from those around me and from those I find along the way,” says Coelho, who relaxes by exploring new areas, sampling different foods, or hitting the beach with his wife Barbara and young children.

In Coelho’s view, Asia is ground zero for the future of gaming. “Major operators are already shifting their focus to this side of the world. Asia Pacific may become a focus for more mergers and acquisitions.” Even in very developed Macau, new opportunities will arise, he says. The area will become a global wealth capital in the near future. And Macau has expanded its tourism business with more non-gaming offerings.

Other parts of Asia offer opportunities as well, Coelho says, including the Philippines, Cambodia, Vietnam, Korea and of course, Japan. Not limiting the future to Asia, Coelho gives a nod to Brazil and his native Portugal as gaming expands. And he wants to be part of the transformation.

For young people interested in the evolution of gaming, Coelho says youth is a natural advantage. “Be technologically savvy,” he advises, “and keep up with the new trends.” Stakeholders are always trying to anticipate what new generations of players will want in terms of entertainment. Who could be in a better position to understand what the market will become than young people who adapt to the new realities: blockchain, cryptocurrency, virtual reality and more?