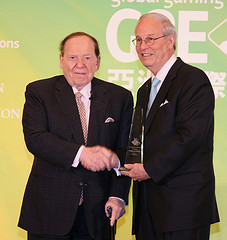 With revenue growth hovering around 50 percent and setting records each month, Macau welcomed the Asian gaming industry to its doors last month when G2E Asia was held at the Venetian Macao. More than 5,000 delegates enjoyed a trade show spanning more than 5,000 square meters and a conference that sometimes produced fireworks and controversy.

In a wide-ranging discussion with American Gaming Association President Frank J. Fahrenkopf, Adelson explained how he envisioned the development of the Cotai Strip and said it will be “finished” with the opening of the company’s developments on sites 5 and 6, scheduled for next year. While the developments of the LV Sands projects will be completed, there are several other projects on the drawing boards for the Cotai region.

Macau needs to widen its appeal, Adelson said, in order to expand its market. He said all future developments should be required to include extensive MICE (meetings, incentives, conventions and exhibitions) space.

“MICE are important because they are what fills the rooms on weekdays,” he said. “We cannot simply depend on day-trip tourists from Guangdong.”

Adelson said Macau isn’t the only jurisdiction in Asia that could benefit from the development of “another Las Vegas.” He said Asia could absorb at least five more developments the size of Macau and cited jurisdictions such as Taiwan, Korea and Japan as being potential candidates.

He also said his company is considering an even larger project in Spain, which would include 12 2,000-room hotel casinos and other non-gaming attractions.

“You can create a market anywhere you want,” he said. “There is nothing different between people in Europe and Asia. Grown-ups just want a place to spend money and be entertained.”

Fahrenkopf led off the trade show by reminding journalists that not only has Macau long ago passed Las Vegas in revenue, but Singapore with its two casinos is poised to do the same. Singapore is on pace to achieve revenues of $6.4 billion. Las Vegas recorded $5.8 billion in revenues in 2010.

Fahrenkopf warned, however, that the junket operators and the somewhat nebulous system they operate is a worry for Macau.

“One thing that investors don’t like is uncertainty,” he said. “The whole junket question and what’s going to happen in the future creates uncertainty.”

At the conference program, a panel was convened that included for the first time operators from the VIP segment of the Macau gaming industry. Moderator Ben Lee started it out with a question that has gone unanswered for years: What is the extent of the “side betting” in the VIP rooms of Macau? A U.S. government report earlier this year estimated that it was 10 times as large as the recorded bets. Panelist Samuel Tsang, chairman of VIP operator Century Legend Group, disagreed.

“It’s 20 times as large,” he told a stunned audience. “The operators keep track of all the bets by texting the information while the game is going on.”

Tsang said that operators offer their players a larger commission rate and higher limits than the casino is able to afford.

“It has some teeth, but maybe only baby teeth,” he says. “The regulations seem to dilute the responsibility between junkets and operators, which allows for a lot of sub-junkets that don’t go through the licensing process.”

“Politicians need to decide if it makes sense to allow junkets to remain a subculture or if they should bring them into the gaming business,” he said.

In Singapore, meanwhile, licensed junket representatives and one or two more integrated resorts could be in the cards, according to Thomas Arasi, former CEO of Marina Bay Sands and now a principal of Harbinger Advisers.

“There’s a great benefit to what independent reps or junkets can do,” he said, “which is to bring in a lot more visitation and foreign VIP play, which I believe would be welcome as opposed to more local Singapore business,” referring to the accepted fact that the government of Singapore would prefer to see more gaming income from non-residents.

However, Sean Monaghan, senior consumer and gaming analyst for HSBC in Singapore, believes there could be reasons for the government to hesitate on the licensing of junkets.

“There is a degree of political risk associated with the vetting of applicants, and the Singapore government has always been hesitant to move in this space,” said Monaghan. “The problem is the industry is so successful today that it can’t go to the government and say, ‘We need the money,’ because they are the two most profitable casinos in the world.

“Licensing junkets is not going to redraw the tourist map or create thousands more jobs, so the political risk is on the downside. It could take a while and some people could be disappointed.”

The other discussion centers on whether the government would approve additional casino licenses in 2016. The 2006 Casino Act only allows the two licenses for the first 10 years.

Arasi said, “One scenario that could play out is where Singapore really wants to make sure that it stays ahead, and says, ‘We’ve done the heavy lifting, we got gaming approved and we got two out of the box. Let’s stay ahead and do another one or two more of these.’”

Monaghan believes that the government will ask for a higher tax rate or more returns to the government if it stays a decision to add additional casino licenses. And with billions of dollars in revenue at stake, the casinos are likely to acquiesce.

A panel on the Macau industry outlined the reasons for the explosive growth of the SAR. Anthony Lawrence, president of Macau Intelligence, said that only 30 percent of the visitors to Macau spend the night in a hotel room, even though occupancy rates in most casino hotels exceed 90 percent. Just to stay even with that percentage, Lawrence said another 50,000 rooms must be added over the next several years.

Lawrence said the Chinese government will continue to support Macau because it is in their best interests to do so.

“A profitable and successful Macau sends a message to other jurisdictions like Hong Kong and Taiwan,” he said. “And that message says as long as you are a good son, you will be taken care of and protected.”

Analyst Gary Pinge said that Macau needs to add more non-gaming amenities to continue its growth. He warned that the casinos need to develop more non-gaming revenue because he expects the Macau government to increase gaming taxes.

“People forget that the tax rate in Macau started out at 10 percent when SJM was the sole operator,” he says. “Now it’s 39 percent and the government undoubtedly believes that the returns earned by the gaming industry in the range of 40 percent are too high. So expect the taxes to be raised or at least a stiff renewal fee when the original gaming concessions start to expire in 2020.”

A panel on gaming prospects in North Asia produced mixed results. Panelists disagreed on the state of gaming expansion in Taiwan, where voters on Penghu Island rejected casinos in 2009. Prospects for gaming on Kinmen Island, close to the coast of mainland China, are more likely.

Japan is in turmoil after the earthquake in March and university professor Toru Mihara said gaming would not be a priority in the socially and economically stressed country.

More amenable to expansion, however, is South Korea, where a small gaming industry already exists. Attorney and influencer Jeff Jones said the government is beginning to recognize the importance of tourism. He suggested that the Korean Tourism Organization will soon ask for legislation that would permit large integrated resorts in and around Seoul and other major cities. Some of the largest gaming companies such as Wynn Resorts, MGM Resorts, Caesars Entertainment and Las Vegas Sands have eyed the country. The most important element, says Jones, is allowing locals to gamble, something that is currently permitted at only one remote location, which has become the most popular—and profitable—casino in Korea.

On the exhibit floor, the slots were king. Bally Technology’s iDeck feature proved to be very popular, as well as several of its games. Japan-based Aruze Gaming has concentrated on the Asian market and has produced several eye-popping community games that were attention-getters. Aristocrat, the market leader in Asia, presented several new games as well. IGT, WMS, Ainsworth and others also attracted attention with Asian-themed games.

And in a market dominated by table games, suppliers such as Shuffle Master and TCS John Huxley hosted stands packed with casino executives looking for innovations that will make their jobs easier.