Age and financial strife can render a casino brand irrelevant-and decimate its bottom line. That's where rebranding comes in. 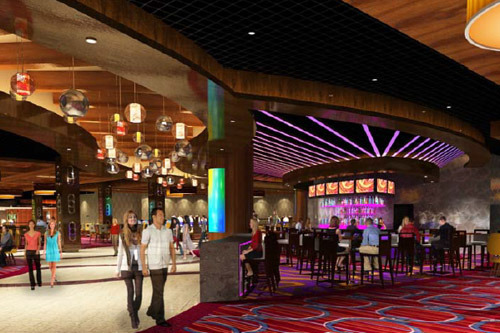 The Imperial Palace, a fixture of the Las Vegas Strip for more than 30 years, was recently rechristened the Quad. The name is supposed to evoke a collegial gathering place at the gateway to the Linq, Caesars Entertainment’s 0 million entertainment and retail corridor. The IP’s passé pagoda motif will be replaced with an ultra-contemporary look in a conversion that will be official this month.

Fitzgeralds in Downtown Sin City recently became the D Las Vegas. The name is a nod to CEO and majority owner Derek Stevens and his hometown of Detroit. The property has shed its whimsical Irish theme and signature pot of gold for a young, sexy vibe and the motto, “Long on Fun, Short on Ordinary.”

The Gold Rush in Henderson, Nevada, is now the Wildfire Sunset. The rebranding of the Station Casinos property included a three-month renovation to create a “sleek and inviting” mood. Station also is reaffirming its commitment to neighborhood patrons with a pervasive “We Love Locals” campaign.

Harrah’s Chester Casino and Racetrack has changed its name to Harrah’s Philadelphia. Chester Mayor John Linder called the new moniker “a slap in the face” and an attempt by Harrah’s to distance itself from the blighted waterfront city. But area councilman Tom McGarrigle defended the move, saying Harrah’s is “just rebranding it to make it a regional name. From a marketing standpoint, it’s better for them.”

It’s been a tough couple of years for the casino industry. As once-thriving properties hit hard times, are bought and sold, go bankrupt and then emerge from bankruptcy, effective rebranding enables them to be repositioned and resold as the next best thing.

The terms branding and rebranding are sometimes used interchangeably, but a rebrand must do two things simultaneously: create a fresh new identity while extinguishing memories of the old one, which may have become tarnished or fusty over time.

Last winter, a series of billboards with that cryptic one-liner sprang up along the Atlantic City Expressway. The message, which included no brand name, logo or other identifying features, sparked a sort of regional guessing game. Some speculated the billboards were teasers for the Atlantic City Alliance, the agency charged with revitalizing the struggling resort town. Others thought they referred to the $2.5 billion Revel resort, which had traveled a rocky road to completion but finally opened in April.

Both assumptions were wrong. In February, it was announced that the outdoor campaign was part of a marketing blitz for the Atlantic Club Casino Hotel. The former Atlantic City Hilton, which lost the right to the gilded Hilton name in 2011, had changed hands and brands a number of times since opening in 1980 as Steve Wynn’s Golden Nugget. Before the latest incarnation, it was known as ACH, which one blogger said, “came off like an interrupted sneeze.”

A multimedia campaign targeted low-rolling locals who wanted a night on the town without breaking the bank. TV spots featured a 40-something woman, coffee cup in hand, who addressed the camera as if chatting with a girlfriend. She regaled the affordability and fun of the Atlantic Club, along with its penny slots, cheap eats, and free parking.

The commercials were “pretty straightforward, an average-Joe kind of thing, and not particularly slick,” says Nancy Smith, CEO of Masterminds, a Greater Philadelphia advertising agency that specializes in gaming. “They have a certain lack of sophistication, so it supports the brand. They did a very good job, very consistent—you have no doubt as to what the Atlantic Club stands for, and what its promise is to the consumer.”

So how’s it working? Last August, the Atlantic Club posted a 25 percent increase in year-over-year gaming revenue, besting every other casino in town including the glitzy new Revel and market leader Borgata. In September, revenue slid 1.9 percent, but the Atlantic Club still fared better than most of its competitors, including Borgata, which was down almost 6 percent, and Bally’s, a Caesars property that nosedived by 22.6 percent.

Its former sister property (both properties were once owned by Colony Capital), the Las Vegas Hilton, faced similar reversals of fortune and also forfeited the Hilton name. Now known as LVH, it too is presenting itself as a budget-minded alternative with the slogan “More Value, More Fun.” Also prominent on the LVH website is the message that the property charges no resort fees, unlike others in Sin City. Though the property is now in foreclosure, it remains open, and in a statement, new managers the Navegante Group said its future is “nothing but bright.”

Rebranding is neither magic nor alchemy, but a product of research and consumer testing that begins with a frank assessment of the strengths and weaknesses of the casino (and its competitors); defines the market segment the subject property can serve best; and strategically recalibrates the position the brand currently occupies to where it wants it to be.

“But you can’t just pick a position that happens to be open and looks good,” says Smith. “You have to know you have what it takes to support that position or deliver on that brand promise. With some casinos, by the time they get to rebranding they’re so desperate to change something, to make the needle move, they don’t take the time to ensure that what they do now has staying power. And misfires can be very costly.”

Consistency is key. Smith recalls a casino that defined itself as a luxury property, and then staged a promotion in which the prize was a La-Z-Boy recliner. “They had it on billboards!” she says. “If you’re going to position as a certain kind of casino with a certain level of sophistication, you want everything you do from check-in service to how you are greeting people to the type of prizes you give away to support that brand.”

Revel in Atlantic City has arguably attempted to co-opt the position held by Borgata as the premier resort in Atlantic City. Ultimately, it is the consumer’s decision who dominates the market, and Revel—which opened as a premiere resort in a dismal economy in an oversaturated market with a competitor that already owns the No. 1 position—has yet to hit its stride.

The Beau Rivage in Biloxi, Mississippi, on the other hand, took on an image that has endured for years without tinkering, promising “A Feeling Like No Other.”

“Whether you were a high roller or a $50 player, a slot player or a table player, whether you were a convention or meeting customer or a weekend getaway customer, they were going to make every experience, regardless of what you were there for, a special one,” Smith says.

Steve Marshall, senior vice president for relationship marketing for the Fine Point Group consulting and management firm in Las Vegas, says casinos compete across four dimensions: capital and location, price, service, and relationship, which is fostered and supported by branding and marketing. Four years ago, when the recession derailed the casino boom, the most intangible of those elements arguably became the most essential.

“It used to be that someone would build a new casino on the Las Vegas Strip, it did really well, and someone else would build a bigger and better place, essentially competing off that first dimension, capital and location,” says Marshall. “But capital isn’t the answer anymore. Increased competition and states clamoring for tax dollars have created a tremendous amount of additional supply. Since 2008, the most important dimension is the relationship a business can have with its customers.”

The process doesn’t always include a total renovation, like the $150 million overhaul of the former Trump Marina in Atlantic City, now Landry’s Golden Nugget.

“It could be as simple as staking out the position that we offer the best customer service or the newest slot product or the most value for your money,” says Marshall.

Importantly, any rebrand must be implemented and embraced at every level, from the parking garage to the front desk to the CEO’s office. “You must get full buy-in from the top to the bottom of the organization when rebranding or repositioning a casino, or it will fail,” Marshall says. “Flawless execution is the key.”

He cites St. Louis-based Isle of Capri, which in 2007 unveiled its Isle brand in Pompano Beach, Florida, and later introduced it at other properties, as a rebrand that made sense. According to the company, the new image blended “a tropical paradise with hot Las Vegas casino action.”

Another example is Caesars’ introduction of the Horseshoe brand at casinos in Council Bluffs, Iowa in 2006 and Southern Indiana in 2007 (most recently, it brought the Horseshoe name to the historic Higbee’s department store in Cleveland). That brand, a stalwart since 1951, carries a distinctive message that continues to resonate in the Heartland: it’s the “Home of the Best Odds, Highest Limits & Biggest Jackpots” and promises to always “Make It Right for the Gambler.”

But they must not dilute their brands in an attempt to reach a broader base, according to Marlene Reyes, executive vice president and chief client officer with the Fine Point Group. “You can no longer be everything to everybody—there’s too much out there,” Reyes says. “You need to narrow your field and then dominate that space.”

It happened after the Borgata opened in Atlantic City in 2003, Reyes says, when other casinos in the market took a copycat approach to competition. “Everybody was saying, ‘We have a new nightclub, we’re nice too. We have a new restaurant, we’re nice too.’ You can’t play that game anymore.” By following the leader, they remained followers.

While a “new and improved” sign or a grand reopening might create a positive spike, unless a property has correctly isolated its position in the market, is consistent in its message, and keeps its promises, it is likely to founder.

Reyes agrees that the former Atlantic City Hilton effectively claimed and cornered its share of that sluggish market, despite a budget strained by years of underperformance. Resorts Atlantic City, which is trying to cash in on the popularity of HBO’s Boardwalk Empire with a Roaring ’20s theme complete with servers in flapper fringe, hasn’t fared as well.

“They thought they could put up Art Deco pictures and hire back Blanche, the singing bartender, but you have to follow up with strategic, scalpel marketing,” says Reyes. “Whether it’s a ’20s theme or a Margaritaville theme or a Space Shuttle theme, you have to back it up with the right offer, the right player development, the right promotions, the right direct mail and advertising and positioning, or it’s not going to work.”

“Rebranding and branding are not just about your advertising,” agrees Smith. “It’s not just about logo or colors—it’s about the experience you deliver on property. You have to bring the brand to life.” In most cases, she adds, that doesn’t include a La-Z-Boy recliner.