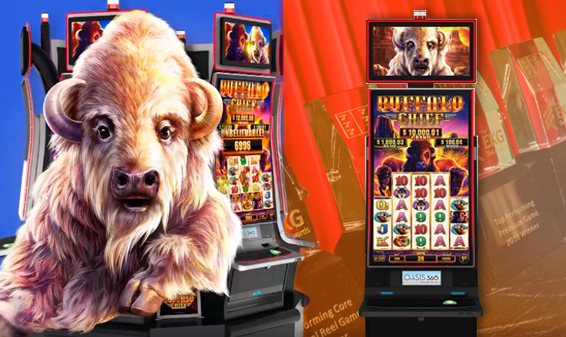 The EKG Slot Awards were created by EKG, a top slot industry consultancy, to recognize excellence in slot machine gaming development. Winners in 17 land-based categories are determined by votes from more than 100 qualified slot directors representing over 300 casinos from across North America.

Interactive gaming winners in four categories are determined by a vote of a distinguished panel of industry experts.

For the third year in a row, Aristocrat Technologies took the top award of Best Overall Supplier of Slot Content. It was one of nine awards logged by Aristocrat in the competition.

Coming in second as far as winning companies was Everi Holdings, which claimed four EKG awards.

In the other main result of the competition, slot legends Scott Olive and Charlie Lombardo were announced as the new inductees to the EKG Slot Awards Hall of Fame.

Olive, founder and principal of content supplier HRG Studios, created some of Aristocrat’s most storied titles when he worked for the supplier from the late 1990s until 2007—including the groundbreaking Hyperlink progressive jackpot system with games such as Cash Express and Penny Train. He co-founded True Blue Gaming in 2007 with former Aristocrat colleague Kent Young.

After Aruze Gaming acquired True Blue Gaming in 2009, Olive founded HRG Studios and went back to creating hits for Aristocrat under an exclusive contract. Among the most notable success stories of his second stint with Aristocrat is the mega-hit Dragon Link, with its Hold & Spin mechanic that is arguably today’s most copied game mechanic.

Olive was inducted via video by Aristocrat CEO Trevor Croker.

Lombardo, the first gaming operations executive to be inducted into the EKG Slot Awards Hall of Fame, is one of the deans of the U.S. slot business. He started his career in the 1970s as a slot mechanic at the MGM Grand in Las Vegas, and worked his way up the slot operations ranks, eventually becoming senior vice president of slot operations at Bally’s Las Vegas. One of the first operators to open his slot floor to new suppliers, Lombardo worked with slot manufacturers on proprietary games for the Bally’s floor, and designed the slot floor for Bally’s new sister property Paris Las Vegas.

Caesars Entertainment ultimately made Lombardo vice president of slot operations for Bally’s, Paris and Caesars Palace, before he accepted a position as senior vice president of gaming operations for the Seminole Tribe in Florida. While with the Seminoles, he developed the slot floors of the two Hard Rock casinos and significantly expanded the slot floors of all the Seminole casinos. Lombardo serves the tribe as a consultant to this day.

A complete listing of the winners of the 2020 EKG Slot Awards is on the following page.