How eSports is infiltrating nearly every corner of the gaming industry 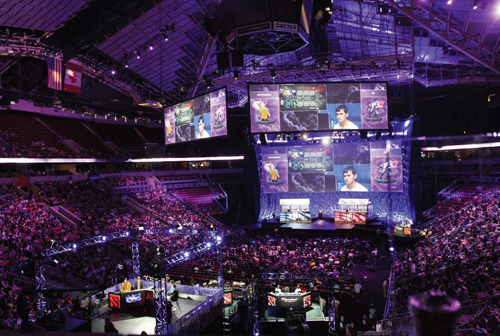 No matter what segment of the gaming universe you call home, if you’re not familiar with eSports, it’s time to get up to speed. eSports, which is little more than a snazzy name for competitive video gaming, is big business, and it’s the talk of the gaming world.

I’ll steal part of an old comedy bit of Brian Regan’s to sum up the reach and the pervasiveness of the eSports industry in 2015: eSports is fast becoming the cranberry of the gaming world. Like cranberries sneaking into all of the other juices, the booming eSports industry seems to be turning up in one form or another in every sector of gaming. The question is, will eSports be nothing more than the most recent in a long line of failed “next big things” that will transform gaming, or is it really the long sought-after bridge that will bring millennials to brick-and-mortar casinos?

What makes eSports different from the previous flavors of the month is that the industry is already established with a tremendous reach, yet provides extreme flexibility in its deployment. The possibilities for eSports integration abound, and are only limited by one’s imagination.

Even though you may just be hearing about it now, eSports is far from a new industry. The roots of modern eSports, the Nintendo World Championships, were first held in 1990 and predate all forms of online gambling. Still, it was the rise of online multi-player games in the early 2000s that thrust competitive video gaming onto a much larger stage. Some 15 years later, the industry has evolved from a niche activity with a public perception somewhere between a Star Trek convention and a Dungeons & Dragons meetup into a multibillion-dollar industry with eSports competitors marketed as athletes.

It’s a bit hard to wrap your mind around, but millions of people watch other people play video games for hours on end. Not because they called next game, but because it’s entertaining.

At any time of the day, and on any day of the week, hundreds of thousands of viewers are tuning in to Twitch.tv’s live streams to watch (and in some cases interact) with their favorite eSports stars in real time. And make no mistake about it, the top eSports competitors are stars, capable of earning seven figures in a given year, as well as another seven figures in sponsorship deals.

On the industry side, eSports is perhaps even bigger. In the modern eSports world, there are high-profile leagues and tournaments that can sell out 10,000-seat arenas in Asia, Europe or the United States in a matter of hours. These events often award multimillion-dollar prize pools to competitors, and have had upwards of 11 million people watching concurrently—a number that dwarfs many major sporting events.

The stats for some of these games are jaw-dropping, and are only likely to go up with ESPN now airing eSports competitions, and with Turner Sports preparing to launch prime-time eSports programming in 2016:

• The League of Legends 2014 World Championship had a prize pool of $2.1 million, and has garnered over 27 million views, according to MMOs.com.

• The DOTA 2014 World Championship produced a total prize pool of $10.9 million, with over 20 million total views, also according to MMOs.com.

• The WarCraft spinoff, Hearthstone, has over 30 million registered users.

And then there are “freemium” games.

Games like League of Legends and its 90 million monthly users have proven to be huge money makers. For those of you who may not know, freemium games are simply free-to-play social games that give the customer the option to purchase in-game items and bonuses to enhance or accelerate their gaming experience. It’s been reported that League of Legends was on pace to make over $600 million from these mini-transactions in 2015, a number that is expected to break $1 billion in 2016.

Furthermore, if a game catches on as an eSport, it’s a veritable gold mine for the studio that developed it.

Not surprisingly, the top eSport games also happen to be among best-selling video games, and this has been the case for over a decade. From StarCraft and WarCraft, to DOTA 2 and Halo, to Hearthstone and Counter Strike, a game’s standing as an eSport often determines its commercial success, and the success of the inevitable series it will beget.

While huge numbers, this shouldn’t be surprising when you consider as of 2013, an estimated 1.2 billion around the globe play video games, or 17

percent of the global population at the time. What should be surprising was eSports’ ability to stay out of the spotlight for so long. But that is all changing.

As is often the case, when people are competing at a high level, the people watching like to have some skin in the game, so it wasn’t long before the fans started betting on these matches, in a variety of different ways.

Betting exchanges where in-game virtual items (with real-world value) can be wagered were the first to appear. According to Chris Grove of OnlinePokerReport.com, an Eilers Research analyst, the size of this betting market which he dubbed “game-mediated betting” will reach $2 billion in 2015, with some 3 million unique customers.

In addition to these third-party game-mediated betting exchanges, sports books were the first gaming companies to see the potential and latch on to

eSports, and in doing so they created the first true intersection of video games and gambling. eSportsbook wagering run by licensed sports betting companies tallied some $300 million in handle last year, from 1.7 million unique customers, according to Grove’s analysis.

One of the sports books offering eSports wagers is Pinnacle. At Global Gaming Expo 2015, Pinnacle Head of Sportsbook Marco Blume said eSports was the company’s seventh-largest betting market, and if it continues to grow at its present rate, which he called “unprecedented in his time,” could move into the top five, overtaking major sports like hockey in total handle.

It’s not just sports books that see potential in eSports, either. In January 2015, we saw the emergence of daily fantasy eSports (DFeS) with the launches of AlphaDraft and Vulcun. The heavy hitters of the DFS industry jumped on board in the fall. DraftKings added DFeS to their contest offerings, and perhaps to keep pace, FanDuel announced the acquisition of AlphaDraft, and its intention to integrate DFeS into its offerings soon thereafter.

The most recent intersection between eSports and gambling is occurring in poker, both live and online, as the industry tries to recapture the appeal it had with twentysomethings a decade ago who now seem to be drawn to Hearthstone over hold ‘em.

MediaRX CEO Alexandre Dreyfus is determined to change the way poker is consumed, and in his words, “sportify” the game. His latest project is the Global Poker League, a mashup of traditional televised poker and a number of elements borrowed directly from eSports, complete with live streams, static teams made up of professional players and a live spectator experience.

In addition to Dreyfus trying to “sportify” poker, several online gaming companies including the parent company of PokerStars, Amaya Gaming, have indicated they are working on hybrid poker/eSports products. While details are sparse at this time, Amaya CEO David Baazov said the company is developing “a new poker variant targeting the large and growing skilled video gaming community,” during the company’s Q3 earnings call in November.

This amalgamations of eSports and gaming products across so many different segments of the gaming world begs the question: Can the brick-and-mortar casino industry capitalize on the eSports phenomenon?

As noted above, there are many ways to incorporate eSports into existing products, or create an entirely new revenue stream.

eSports can be played online or in person. It works on its own, as a ticketed event capable of bringing thousands of potentially new customers to the casino. eSports can also be integrated into existing casino products (online and brick-and-mortar), from slot machines to poker. Or a casino could opt for a lighter footprint and simply focus on the gambling side of eSports—adding eSportsbook or daily fantasy eSports products, where allowed by law. Nevada sports books can offer lines on eSports contests, and the New Jersey Division of Gaming Enforcement has stated that casinos and racetracks in the state can offer DFS (and therefore DFeS) contests to their patrons.

Yet another way a casino could capitalize on the popularity of eSports (which is incredibly high among the millennial demographic casinos are struggling to attract) is to host eSports tournaments. In August 2013, the League of Legends Finals sold out the Staples Center in Los Angeles (some 8,000 tickets) in less than an hour. If casinos are really interested in marketing to a couple thousand millennials, holding an eSports event seems like a pretty good option.

The Underside of eSports

ESports are not without their risks. The industry, despite its age, is extremely fragmented, with competing leagues, some with dubious reputations, all over the globe. Because of this, there are no standardized rules for eSports competitions.

The industry also faces regulatory hurdles in certain jurisdictions, particularly when it comes to the betting products that go hand-in-hand with the matches. For example, with sports betting illegal outside of Nevada, eSports startup Unikrn, an eSports betting exchange, can only offer U.S. residents free-to-play missions that unlock achievements.

Speaking of the pervasiveness of betting, the industry has long been dealing with a number of match-fixing scandals and rumors. While the top eSports competitors are compensated quite handsomely, there is a sharp drop-off to the next tier of professional players. According to Blume, a typical professional video gamer makes only $40,000 to $60,000 a year, making them highly susceptible to engage in match-fixing for a substantial but not exorbitant payoff.

That being said, Blume noted that licensed and regulated sports books rely on match integrity for all of their contests, and have been keeping a watchful eye on the industry. Both Blume and Grove indicate the fragmented industry is starting to consolidate, which allows for better internal controls by the leagues, will likely lead to higher average salaries, and offers Blume and other sports books operators the capability to work in unison with the leagues to sniff out potential match-fixing and hopefully nullify it to the point where it’s no longer a major concern.

ESports are here, and they’re here to stay. The question is whether they will carry on as a stand-alone industry, or will be enveloped by the gaming industry and turned into a ubiquitous product that finally brings millennials into the folds of the brick-and-mortar casino industry. Only time will tell.