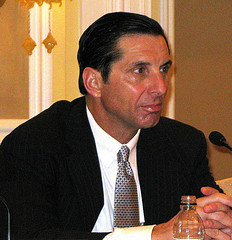 In a surprise announcement, Marina Bay Sands President Thomas Arasi last month told his employees that he is stepping down.

“I have decided to pause, take a breather and spend more time with my daughter and other family,” he wrote in an email memo to the staff.

Arasi took over in August 2009 and guided the property through the final stages of construction and opening. The revenue produced by the integrated resort has been good, and Arasi was reportedly liked by upper management of Las Vegas Sands, the parent company of Marina Bay Sands.

LV Sands also announced that former Trump Entertainment CEO Mark Juliano, who also led Caesars Palace for several years, will step in as senior vice president of marketing for Marina Bay Sands, but will not be Arasi’s replacement.

The company also said that John Dems will join the team as senior VP of sales and marketing. Dems is a former Starwood executive with experience selling meeting space in Asia.