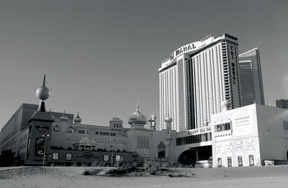 Atlantic City has endured tough times since the economy turned south in 2007 and regional casino competition exploded. But nothing has hit the city as hard as the closing of four casinos in 2014.

Until this month, when Trump Taj Mahal will close its doors. And the Taj may not be the last to close if a looming referendum that would approve two casinos in North Jersey is successful.

The Taj almost closed in 2014 as well. It was only via the intercession of Carl Icahn, then the casino’s largest debtor, that it survived. But even then, the Taj barely survived. To do so, Taj managers cut overhead. One of the biggest items was eliminating the health insurance for its workers.

In 2014, a bankruptcy court judge allowed Taj Mahal owner Trump Entertainment to terminate its health and pension benefits with Local 54 of the UNITE HERE union. The union and Icahn—who was clearly going to take control of the property after it emerged from bankruptcy—have been waging a battle ever since. Taj Mahal management reportedly had offered a lesser restoration of benefits, but the union rejected the offer and went out on strike.

The Taj held off a challenge to that decision in federal court. The union, which represents about 1,000 workers at the casino, went on strike on July 1 in an attempt to regain those benefits. The effort was immediately rejected by Icahn.

Two weeks into the strike, Icahn announced that the property would close on October 10, resulting in a loss of more than 3,000 jobs for the resort. Tony Rodio, the president of Icahn’s Tropicana Entertainment, which also owns the Tropicana in Atlantic City, said there was no path to profitability and blamed the union for the closure. The union disagreed.

“This labor dispute has been going on for almost two years,” said union President Bob McDevitt in a press statement. “The company has saved about $25 million in labor expenses, but lost between $150 million and $200 million in revenues. The proposal we put forward today allows all of us to move forward. Now it’s time to see if this company is interested in moving forward or just wants to punish workers and Atlantic City.”

A last-ditch attempt to keep the casino from closing was anything but that.

Rodio said the meeting between the union and Taj Mahal management had been scheduled to discuss details of the closing. He also issued a lengthy and blistering statement blaming McDevitt personally for sabotaging negotiations leading to the Taj’s eventual closure.

“This was not a negotiating session,” Rodio said. “As previously announced, the Taj Mahal will close its doors on October 10, 2016. Bob McDevitt and the Taj bargaining committee have no one to blame but themselves for this sad outcome. If McDevitt cared even one iota about the future of the employees, he would have allowed them to vote on the proposal we offered five weeks ago based on his recommendations, which we believe could have saved the Taj. But in the end, he blindsided us and the employees because closing the Taj served his personal purposes.”

All is not lost for Taj workers, however. Since the announcement of the closing, competing city casinos have conducted job fairs that have drawn many Taj Mahal workers. MGM Resorts, the owner of the Borgata Hotel Casino & Spa, was first, holding a job fair for its new MGM National Harbor Casino in Maryland, which drew more than 500 applicants. Later, Caesars Entertainment held a job fair to fill about 200 positions at its three Atlantic City properties as well as about 300 more between Harrah’s Philadelphia and Horseshoe Casino Baltimore.

Caesars officials said the job fair was designed to attract Taj Mahal employees, as well as other trained and experienced personnel that have lost jobs in Atlantic City.

One of the casinos that did close in 2014, Revel—which had opened only two years earlier—may never reopen, at least under the ownership of Florida developer Glenn Straub, who said he is tired of negotiating regulatory hurdles in New Jersey and may abandon plans to reopen the property.

Straub said he has been frustrated by the slow progress he has had getting regulatory approvals from the state.

“This state stinks,” he said. “It just stinks… I worked in five states. This is 10 times worse than what it would be anyplace else.”

Straub bought the closed Revel out of bankruptcy for $82 million, though the property cost $2.4 billion to build. He then launched a lengthy battle with the site’s former power plant operators over electricity at the site, but those issues were settled earlier this year. He then said he hoped to reopen at least part of the property earlier this summer.

Straub also planned to lease out part of the site to a casino operator, but balked when state regulators ruled Straub’s company Polo North Country Club Inc. would still need to gain some form of casino licensing. Straub had not expected to need licensing to lease out casino space. But since his plan also envisioned some profit sharing, the Division of Gaming Enforcement required a level of licensing.

Straub told the Newark Star Ledger that he is tired of fighting to reopen.

“To hell with that,” he said. “I’ve got other things to do. I don’t have time to be screwing around with this stuff.”

There were also reports by the Philadelphia Inquirer that Fantasea Resorts, an Atlantic City time-share company, is negotiating with Straub to take over space in the property.

“We’re in negotiations about Revel with the owner about a variety of scenarios,” Herbert Ushewokunze, spokesman for Fantasea, told the paper. “We’re considering what we can do that would best serve our interests.”

Straub told the Inquirer in a telephone call, “We’ve been talking about the 12 floors that are unfinished out of 54.”

The damage to Atlantic City from competition began when Delaware legalized casinos in the early 2000s, but didn’t intensify until Pennsylvania and New York got into gaming a few years later. But the biggest damage could come from inside, now that a referendum will be on the ballot in November that could bring two massive casinos to North Jersey.

Both sides in the debate over whether to expand casino gambling in New Jersey outside of Atlantic City have started taking their case to voters through extensive advertising campaigns. Some observers expect more than $20 million to be spent on the campaign, the most expensive ever.

Those in favor of expanding casinos to northern New Jersey gained some support for state Assemblyman Ralph Caputo, the chairman of the Assembly’s Tourism, Gaming and the Arts Committee. Caputo is a former casino executive in Atlantic City who is leading the charge.

“Powerful and well-heeled political, corporate and labor interests outside New Jersey will spend whatever it takes to defeat the referendum for North Jersey casinos in order to keep billions of dollars of our gaming revenue flowing out of New Jersey and into their pockets,” Caputo said in a press release. “They like things exactly the way they are, and will use innuendo and outlandish accusations to convince New Jersey taxpayers to vote against our own best interests because it benefits them, and that offends me.”

Voters will be asked to decide whether two new casinos can be built in northern New Jersey. Though the referendum doesn’t say where the casinos will be built, proposals for casinos at the Meadowlands Racetrack and in Jersey City are considered the leading contenders.

Supporters say the state needs to build the casinos to win back casino tax revenue lost to new casinos in neighboring states. Opponents say the new casinos will just further cannibalize the Atlantic City market and would lead to more casino closings there. They also point out that there is no stated tax rate in the wording of the referendum, nor any discussion about how the money will be divided (Atlantic City was hoping for at least $50 million a year). And since New York has already voted to consider casinos in the New York City area, any advantage a North Jersey casino had would be quickly erased.

Voters in the northern part of the state are already seeing an advertising push from both sides.

Two organizations, No North Jersey Casino Coalition and Trenton’s Bad Bet, are also fighting against expansion. The groups are not required to disclose all of their backers, but previous reports have said that groups representing casino interests in both Pennsylvania and New York are supporting the effort to defeat the referendum.

Polls suggest that the referendum will likely fail with voters. A Fairleigh Dickinson University study published this summer found that only 35 percent of New Jerseyans support the referendum.

A state takeover of the activities of the Atlantic City government is also likely to occur in November. Governor Chris Christie and the legislature have given Atlantic City until that time to come up with a plan that would stabilize the city’s budget, which has been $100 million overdrawn annually since 2010, when the state began to oversee the city’s finances.

In exchange for bailing out the city, the state wants to liquidate the city’s Municipal Utilities Authority, one of the few valuable assets that remain. The state also wants the city to turn over the site of the city’s former airport, Bader Field, for sale.

The casinos have agreed not to sue the city for back taxes in exchange for a PILOT program (Payment in Lieu of Taxes). At one time, casinos paid about 80 percent of Atlantic City property taxes. With the PILOT program, that percentage is down to 40, causing massive tax increases on the city’s residents and small businesses, which increased by 40 percent in 2015.

Despite the bad press surrounding Atlantic City and the announced closing of the Trump Taj Mahal, Atlantic City’s casino industry brought in $259 million in profits for the first six months of 2016—a 21 percent bump over last year.

Six of the city’s eight casinos saw profit increases, including the Taj Mahal, which turned a $2 million profit for the six months after losing nearly $10 million for the first six months of 2015.

According to the New Jersey Division of Gaming Enforcement, the city’s casinos reported a collective second-quarter profit of about $259 million, compared with $213 million in 2015. Operating profits were up 15 percent in the second quarter of the year at $152 million, a 15 percent increase compared with $132 million in the second quarter of 2015.

New Jersey Casino Control Commission Chairman Matt Levinson released a statement saying that the results show that “slowly but surely,” profits are increasing for the resort’s casinos, and noting that profits are the highest for the first six-month period since 2010.

According to the DGE, the Borgata reported the biggest increase, up 27 percent in the second quarter to $106 million, compared with the same period last year.

Gross operating profit reflects earnings before interest, taxes, depreciation and other charges, and is a widely accepted measure of profitability in the Atlantic City casino industry.