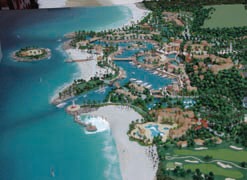 Jamaica’s minister of finance says a field of five potential casino bidders has been narrowed to just two contenders. Two would-be bidders, Amaterra Jamaica Limited and Fiesta Jamaica Limited, could not pay the 0,000 application fee, and a third candidate pulled out of the race.

Richard Salm, who has partnered with American Phillips Reynolds, says the Casino Royale Jamaica Limited partnership is out of the running “temporarily” and will “re-enter the fray, bigger and better.” The Jamaica Gleaner reported that Fiesta paid none of the $150,000 bidder’s fee and was disqualified.

Celebration Jamaica Development Ltd. and Harmony Cove Ltd. are the only two still in the running.

Celebration, led by developer Robert Trotta, hopes to invest $450 million in the first phase of its project to develop 1,000 hotel rooms, a 75,000-square-foot casino and sports book complex, and other amenities including a health club and spa. The resort will be located in Montego Bay.

Harmony Cove, a project of the Tavistock Group and Harmonisation Ltd., will be developed on 2,200 acres of land in Trelawny. The first phase will include development of a 1,000-room hotel, a championship golf course and casino facilities. The cost for that phase was last estimated at $900 million.