An excerpt from Book 'Em, The Man Who Revolutionized Casino Entertainment by Tom Cantone 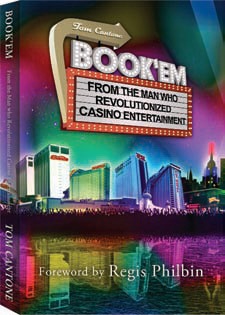 EDITOR’S NOTE: Tom Cantone is a legend in the casino industry. He started out booking entertainment in Atlantic City in the formative years of the industry there, and started a trend by signing up new and upcoming stars instead of simply casino staples. Today, Cantone is the senior vice president of sports and entertainment for the Mohegan Tribal Gaming Authority in Connecticut, after holding positions with the Sands and Trump casinos in Atlantic City and Foxwoods in Connecticut. Book ‘Em, The Man Who Revolutionized Casino Entertainment is a thoroughly interesting read featuring Cantone’s recollections of his experience with many of the biggest stars in the casino industry.

“They Will Never Play A Casino”

If I had a dollar for every time I heard agents say their artists will never play a casino, I would have some money in the bank. That was usually the first response every time I would try and book a contemporary artist in today’s pop culture no matter what the decade—’80s ’90s or 2000s. It got better over time, but we had to pioneer the fact that the casino world was, in fact, a playground where the buying public bought CDs, albums, movie tickets and concert tickets, all under one roof. But because of the poor perception of casino entertainers playing in Las Vegas in their twilight years, it really set up the stereotype of old blue-haired women sitting in those seats. Stars of a certain stature wouldn’t be caught dead performing in a casino showroom because that’s where the old timers lived out their final performing days.

After years of slowly chipping away that perception, we were able to turn around the entire image in a complete 180. Now, the irony is that the casino stage is often the first venue a contemporary artist will play and even start their career. Audiences are more hip, younger, more mainstream, contemporary and, of course, able to buy what they are selling.

Eddie Murphy played a significant role in breaking down those barriers. Once he set foot inside a casino showroom, and the press told the world that he did, it made for an instant hip factor for others to follow one after another after another into a long line of today’s contemporary stars. That was not the case when I was just a “walk on” in the casino business where the likes of Steve and Eydie ruled the roost and no on else was even considered.

The Las Vegas big boys took notice when they saw I was responsible for the debuts of contemporary artists such as Eddie, Robin Williams and Linda Ronstadt. The first real endorsement that we might be on to something came when an article appeared in the Las Vegas Sun crediting what we had done with a new wave of casino entertainers, noting that they could take a lesson from yours truly.

I often think how proud Alan Freed must be. He emceed the first rock concert and coined the phrase “rock and roll” on March 21, 1952. He was a visionary, realizing that the music industry thrives on change, on moving forward. I was criticized for my audacity in booking younger, contemporary artists who, many felt, had no business being in a casino. That it was just a fad—and a disruptive one at that. It was risky for me to book them in this strange new entertainment world.

Sometimes, I felt like a one-man band because most casinos weren’t booking the kind of things I was booking. I think they had a wait-and-see attitude to see how it would play out. I really had to fight the fight alone in tearing down the casino perception. I felt the next generation was already in the house and I owed it to them to deliver contemporary acts for them to enjoy as well. I remember the rejection from agents and managers like it was yesterday, telling me that their clients “will never play a casino.” Ironically, today they all play the casinos.

Back then, there were only two markets in the casino world: Las Vegas and Atlantic City. Now, there are 44 states with a coast-to-coast network of entertainment venues that are second to none. All have the advantages of marketing them and their product in a retail chain that was constructed to be the new marketing tool for a variety of performers that run the gamut from those just starting out in their careers to individuals on the brink of becoming stars, to those with major star power. They now have a venue to work in that didn’t exist when I started out.

Today, many of the artists create their tours going west to east or east to west, all routed through casino venues. It’s the new national distribution network of live talent. Many agents and artists did not see this coming and stayed within the confines of what they were used to, limiting their dates, venues and revenues.

The first agent who got it right was Eddie Micone and the first agency was ICM, in New York. They understood what I was trying to bring to the rest of the casino entertainment world and they became my extended family in promoting the fact that performers on casino stages today are vastly different from their predecessors.

Who would have thought that a group like the Black Eyed Peas would ever play a casino? Today, you see everyone from Britney Spears to the Jonas Brothers to Ke$ha working casinos. Marketing acts to bring kids into casinos was unheard of years ago. In fact, it was taboo. Thank goodness those days are gone forever.

In fact, casinos today are the new malls. Families come to shop, eat, bowl, stay overnight, go to the spa and yes, see a show. Some 60 percent of visitors to casinos today see a show. Imagine that. Those same agents and managers who swore their artists would never play a casino are now the first to call me to book their clients. But there’s always a price. Because it’s assumed that we have a lot of money, casinos end up paying a premium price for acts. Not to mention, we also give rooms, food, beverage, transportation and marketing support. No other freestanding venue would ever do all that on its own nickel.

According to the 2010 American Gaming Association casino entertainment survey, casino stages tap 28 percent of the U.S. adult population. What artist wouldn’t want in on that direct marketing opportunity? To have some 62 million adults right outside their dressing room.

Suddenly, that casino stigma is not a problem. I never thought it was. These are their fans; they have money and spend it. Gambling is now another form of “entertainment.” According to a 2010 public opinion poll conducted by VP Communications, Inc., and national pollster Peter D. Hart, 81 percent of Americans think casino gambling is acceptable for themselves and others. To use an old retail phrase: casinos are where America shops and plays, spends and sees a show.

In fact, people of all ages spend more money on slots than movies, baseball and theme parks combined. There are 850,000 slot machines in the U.S. That’s twice as many as ATMs, and many of these slot machines are now licensed by American Idol, Sopranos and pop stars. Who doesn’t want in on all that cash action?

I wasn’t ahead of my time; I just knew what the future held and tried to convince those big talent agencies that they should take advantage of the new stage in town. Eventually, they all did. I’m proud of the fact that I may have played a role making casinos the place to play. The Las Vegas Sun knew it was coming when they put that label on me that seemed to stick throughout my career as “The Man Who Revolutionized Casino Entertainment and Brought It Into A New Era.” I didn’t know it at the time, but I guess I was helping to transform the industry by developing and marketing younger artists. If that alone is my legacy for the years on the job, then it was time well spent.

I’m first and foremost just a marketing guy who used entertainment as an instant way to differentiate my casino from all the rest. Out of the blue, in July 2012, Ed Sutor sent me his weekly casino column called “The Wizard of Odds.”

He wrote: “In the absence of great casino marketing innovators such as Steve Wynn (Golden Nugget), John Allan (Harrah’s), Dennis Gomes (Tropicana), and Tom Cantone (The Sands), it is most fortunate that the future of our casino city has fallen when it comes to casino marketing.”

On a sad note, the Sands Hotel & Casino in Atlantic City, which gave birth to the new wave of young stars, is no more. Pinnacle Entertainment imploded the old place in October 2007 to clear the way for a $2 billion mega-casino resort on the Boardwalk, but the recession had other ideas. But know one thing: Whatever takes its place will never equal the passion and power of a place that was once half its size. You can’t build personality. You create it.