Two years into an unlikely experiment, the dual casinos of the island nation are doing exactly what was predicted-and more. 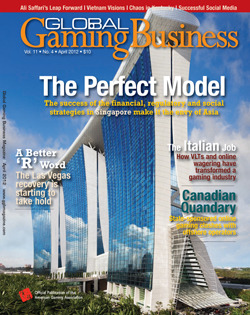 While Macau may have the revenue record, Singapore is now one of the world’s most-recognized casino gaming markets. It is also now one of the largest, having cleared over US billion in annualized gaming revenue over the past year. Within Asia, Singapore has become a substantial player in the tourism sector as well, parlaying its casino legalization success into tourism enhancement success.

It’s now time to consider what this market may be moving forward into 2012, why it should matter to every public policy-maker in the world, and what industry professionals should do to capitalize upon it.

It wasn’t long ago that Singapore was just starting to consider the issue of casino gaming legalization. In 2004, the strategic question that Singapore needed to answer was whether casino legalization would generate substantive economic activity to a noticeable level. In particular, there was a focus on the tourism economy.

Sure enough, in early 2005, the Singapore government decided to move forward with casinos as integrated resorts (IRs) under the premise that tourism growth could be enhanced with such a plan.

And so, the rest is history. At least half a dozen of the world’s leading casino and entertainment companies responded to the RFP, and Las Vegas Sands won the Marina Bay site (central location) with its Marina Bay Sands (MBS) proposal. Genting won the Sentosa site (a close-proximity tourist island) with its Resorts World Sentosa (RWS) project.

The total construction costs for both projects combined was over US$10 billion, and took place during the global financial crisis of 2008, a key stabilizer of economic growth in Singapore during a tough period.

A cap of 10 years was placed on any further development of casino gaming in Singapore. This essentially means that from the time period the concession (license) was awarded to both operators, 2005 and 2006 respectively, no other IRs can be developed in Singapore.

The strategic and financial contribution of Singapore’s integrated resorts has been enormous. Tourism visitation to Singapore has increased over 15 percent since the opening of both resorts. The monthly cash flows from both IRs continue to post impressive performance.

As is the case with all new development projects, the management teams of both properties are fine-tuning the delivery of both services and product. It should be expected that both companies would continue to look at ways to further enhance the offering to attract larger population sets to their properties.

Labor issues at both IRs have been significant. The late 2011 general election in Singapore raised several questions as to whether Singapore can continue to support a large foreign workforce. This has created a situation in which the IRs have had to dive deeper into a labor market that is already thin and requires enhanced service management training.

Inbound tourist visitation to the IRs has been interesting to observe. Primarily ethnic Chinese visitors from countries such as Indonesia and Thailand have been significant. Singapore’s ability to “feel comfortable” to the ethnic Chinese of Southeast Asia is one of its competitive advantages.

Macau has posed little challenge to Singapore, and vice-versa. Both Macau and Singapore continue to grow (although Singapore has finite capacity to do so). Overall, the various pundits that had the view that Macau or Singapore would eat each other’s lunch have been proven wrong.

However, a down-market situation has yet to be observed, and the dynamics between Macau and Singapore might be different in that kind of scenario. While Asia’s emerging economies continue to perform well, they are also highly dependent on reasonable growth in developed markets.

When the IRs were first established, the Singapore government took a stance at the same time that it would address the issue of problem gambling.

One of the measures implemented in advance of the IRs opening was a $100 (US $68) entry fee for Singapore citizens and permanent residents. Since the opening of the IRs, several people have been given jail sentences for trying to “get around” paying the $100 entry fee. The courts of Singapore are now becoming familiar with what it means to judiciously oversee the casino gaming industry.

Singapore, when it legalized casino gaming, immediately established its Casino Regulatory Authority (CRA). This government body has been quite proactive in ensuring that the IR operators comply with rules and regulations of casino gaming activity in Singapore. In fact, the CRA has taken quick and fair regulatory action in various instances against the IRs for alleged violations of the regulations.

It should be expected that Singapore will continue to hone its regulatory approach on casino gaming and will do so strictly. This approach bodes well for Singapore in the long run, as Singapore’s reputation as a global financial center cannot, and should not, ever be challenged by any improper activities occurring in the country due to casino gaming activity.

Regulations governing the marketing of casino gaming are going to be enhanced in Singapore, and this might even be extended to strategies such as “loyalty memberships.” This enhanced enforcement of marketing activity by the IRs has been in direct response to concerns raised in Singapore’s general election alluding (by Singapore citizens) to whether the government was doing enough to protect the local population from problem gambling.

There are a few reasons why Singapore might play as a good hub/host to internet gaming. But the most valuable characteristic is that the country has a great regulatory reputation that could be leveraged on. If global consumers have a choice in where they patronize online casino gaming providers, it is highly likely that Asians would feel very comfortable knowing that the Singapore government was overseeing the activities of companies there.

All this said, the issue of internet gambling legalization in Singapore is probably a bit far off at this stage, but it is certainly something to continue to be on the lookout for.

One of the biggest questions out there right now is whether Singapore will ever allow more IRs (casinos) to be built. The exclusivity periods provided for the first IRs operators (MBS and RWS), in theory, end in 2015 and 2016 respectively.

The question of whether Singapore will expand its casino gaming industry is a sensitive one. In one sense, the government will certainly want to do everything possible to further enhance its tourism and economic sectors. In the other sense, further expansion of the industry risks pushing Singapore toward a situation in which political risks become more pronounced.

The math of when and how the government will finally take this issue head-on is interesting. It took about four years for both IRs to be built, and that means that if the Singapore government awarded another casino license in early 2012, it would not be until at least 2016 that another IR became operational.

This essentially means that the issue of whether to allow casino gaming liberalization is now, from a mathematical perspective, something that is clearly on the table. One thing is certainly now clear to the Singapore government—the casino gaming industry in Singapore can be financially successful, very successful.

The strategic analysis on the gaming expansion issue will have to include consideration of such issues as employment, tourism sector development and the overall competitive position of Singapore in Asia. The issue of problem gambling will weigh heavily on the Singapore government as it considers the issue. At the same time, Singapore does not need the casino industry to economically survive.

The answer to the question of whether Singapore should actually allow more casinos will be answered another day. Until that day, it’s worth it to watch the market and its dynamic interplay in the broad Asian economic development story.