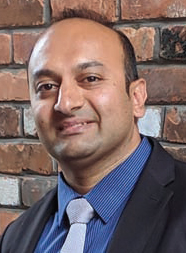 Technology always fascinated Maulin Gandhi growing up in Kenya. He owned an early version of an Apple before such computers went mainstream.

“When I was curious, I learned the old-fashioned way—by taking things apart, and putting them back together.”

This interest in high tech led to graduate studies in computer engineering and artificial intelligence at McGill University in Montreal, Canada, a stepping stone to his role as president of Tangam Systems.

“I got exposure to the other end of the spectrum. Information was readily available, but we had to parse through massive volumes of it to solve problems. Fundamentally, I believe it’s the combination of these learnings that has shaped me.”

Armed with a degree, Gandhi joined Tangam founder Prem Gururajan in 2004, with the goal of using video analytics to overhaul how casinos think about table games.

The early team spent the first few years developing and commercializing the breakthrough technology that would use surveillance cameras to automate data collection for table games. Despite interest from clients, and winning numerous awards at gaming shows, the product failed to make headway with enough casino operators. Sales were hampered in part by significant upfront capital costs, in part by poor market conditions created by the global financial crisis. “We discontinued the product in 2009,” Gandhi says.

But as the saying goes, you can learn more from failure than success.

“We were able to pivot into a new strategy and started research and development on a solution that would enable operators to improve table games performance using the data they already collected,” Gandhi says.

Tangam focused on algorithms that made complex data easier to utilize. “More importantly, we were able to offer our clients a minimal upfront investment model and immediate return on investment.”

This model turned out to be a win-win for Tangam and its clients. “We enabled ordinary table games managers to drive financial performance and productivity improvements by helping them make better decisions,” says Gandhi, who spends time with wife Swati, and two young children, when not in work mode.

As the product line grew over the past nine years, Gandhi’s role with the company evolved. “I consider myself lucky to have touched almost every aspect of our business.”

“The result is that our clients are able to maintain superior financial performance compared to their peers,” says Gandhi, who often relaxes with midday gym workouts.

Gandhi counts his father, Dr. Rajesh Gandhi, as his closest mentor. In addition to being a physician, the Kenya resident is also a “serial entrepreneur. He’s successfully ventured into farming, hardware, manufacturing, private schools and real estate,” Gandhi says. “His latest venture is setting up a full-service medical diagnostic center, the first of its kind in his town.”

Count Prem Gururajan as someone Gandhi also looks up to. “He’s an innovator and has an uncanny ability to see problems through a lens that most people don’t, finding unique solutions to almost every problem.”

An avid reader of autobiographies, Gandhi learned from both mentors. “They taught me to push outside of my comfort zone when it comes to critical thinking, problem solving and being persistent.”

Others interested in the gaming industry as a profession have plenty of opportunity as demand for talent outpaces the supply, globally.

“Experience in more than one field will always offer a path to find new opportunities,” advises Gandhi. “Some of the best analysts are the ones who have experience in operations as well.”