Switzerland's gaming industry is an alphabet soup of various operations 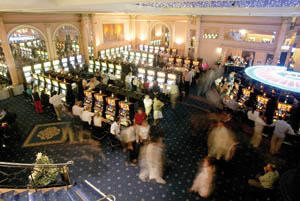 In the second part of a three-part series, “Germany/Austria/Switzerland: Saturation or Malaise,” we visit the Swiss gaming industry. In Part I of the series in the April issue of GGB magazine, we saw the multiple problems facing

operators in the mature market of Germany. The initial question for Switzerland, which entered the modern casino era less than 10 years ago, was just how much had been learned from observing the best and the worst in existing jurisdictions around Europe.

Establishing a new casino jurisdiction is never a quick or easy task. Making the transition from a reasonably successful, local version of casino gaming to a more generic international format can be even more complex. Give final say on the change to the individual voter in a national referendum-which vote binds casino taxes directly to the national pension plan-and you have the condensed backstory of the current Swiss casino industry.

At present there are 19 casinos in Switzerland. Seven of them have an “A” license and are intended as full regional casinos to serve the general public. Twelve have a “B” license and are primarily to add to the tourism offering. The main differences between the two licenses are in the number of table games and slots allowed and the amount of the maximum stake and payout. An “A” casino may offer any table games approved by the Swiss Gaming Commission-the ESBK for short-and any number of slots, with no limits on stakes, payouts or jackpots. A “B” casino may offer three table games from the ESBK-approved list, on as many tables as it cares to have, and up to 150 slots. Maximum stake for a “B” table or slot is CHF 25-just shy of $25 these days, with the Swiss franc close to parity with the dollar-and maximum win per game round is CHF 25,000. Slot jackpots fall under a separate regulation for “B” casinos and are limited to CHF 100,000.

The casinos are individually owned and operated by a mix of commercial companies, in some cases together with local government as a partner. Familiar operators include the French groups Barriére and Partouche, with properties in the French-speaking region of Switzerland; Tranchant, also of France, but operating the casino in Basel in the German-speaking region; a Swiss subsidiary of Casinos Austria, with interests in seven casinos; and a subsidiary of the Novomatic group of Austria, which wholly owns the property with the highest gaming revenue in the country, in the Italian-speaking region.

Estimates for 2007 put GGR from the 19 casinos somewhere near CHF 1.1 billion, or about ?660 million. Compare that to the 81 casinos in Germany that produced ?923 million that same year. The population of Switzerland is about 7.5 million. Germany has 11 times that many inhabitants.

One explanation for the more efficient result is that Swiss casinos have more incentive to do well. Taxes on gaming revenue would make Las Vegans cringe, but in practice they are lower in most cases than in some states in the U.S.A. For “A” casinos, taxes start with 40 percent on the first CHF 20 million and increase by a half-percent for each additional million won. For “B” casinos, the rate is 40 percent for the first CHF 10 million and then the same half-percent per million increase kicks in. The logic behind the slightly higher rate for “B” casinos is that they are generally expected to operate fewer tables than “A” properties and thus be less labor-intensive.

The maximum rate for both licenses is 80 percent, the percentage at which most jurisdictions in Germany begin. In fact, the highest rate paid by any Swiss casino in 2006 averaged just over 61 percent.

The long road to modernity began with a referendum in 1993. Three-fourths of the voters were in favor of changing the existing casino system to one which would allow the development of international-style casinos.

At the time, Switzerland had a kursaal casino industry built almost exclusively around low-stake slot machines that by law had to incorporate a very simple skill element in the game’s outcome. The roulette-style table game boule completed the offering, with a maximum stake of CHF 5.

As unsophisticated as they might sound, many of the kursaal casinos did great business. Not to be confused with simple slot arcades, they functioned as popular entertainment centers, combined with restaurants and stages for live performances. Some featured elaborate, themed interiors. And they made money-some grossing more than major casinos in Germany.

It took several years from the initial vote, but in April 2000 a new law governing casinos and games of chance was introduced at the federal level. The law provided for a transition phase for the kursaal industry. Kursaal operators received a provisional “B” license and were allowed to apply for one of the 14 new “B” licenses within the year. If the operator did not apply or was rejected, then business would have to cease after the one year and the license would go to one of the new bidders.

Seven of the coveted “A” licenses were also put up for bid. The idea was to provide one major property for each million inhabitants and to have the casinos located strategically around the country, rather than concentrated in one or two gaming zones.

One of the most desired locations not included in the original plan was Zurich. The financial powerhouse with over a million inhabitants in the vicinity attracted more than 50 proposals from would-be operators. For a variety of reasons it was decided to leave Zurich out of the equation and to date there are no announced plans to change that decision. Instead, the Zurich market is served by Grand Casino Baden, just 25 kilometers from central Zurich. Also, the “B” Casino Pfaffikon is about 30 minutes down the lakeshore from Zurich.

A crucial element to the Swiss gaming law is its emphasis on combating problem gambling. From the start, the law has required license holders to comply with a number of concrete measures that go way beyond placing a few brochures in reception. Personnel must be trained to recognize symptoms of compulsive gambling in their players and be capable of offering them information on where to get help. Casino management can ban a player it believes is getting in over his or her head, if that player is unwilling to request a self-imposed ban or visitation limit. Casinos require a show of identification to enter, which makes the banning measure feasible, although the elaborate registration process required by many European jurisdictions is something that was mercifully bypassed. The operator is also required to spend CHF 250,000 annually to maintain a relationship with a qualified scientific facility, such as a university, for advice and support of its efforts in this area.

The most recent figures available show that by the end of 2006 a total of 16,761 people were banned, self-banned or partially banned from Swiss casinos. A national database ensures that the information is available to all casinos. In 2006 there were 2,882 players who qualified for newly banned status. Of these, 1,013 had the ban imposed on them, while the rest were the result of requests by the player involved. A ban is imposed for a minimum one year, after which the player can apply for its removal.

Despite the taxes and social mandates, as mentioned earlier, business is going fairly well for the operators. In 2006, the “A” casinos at Lugano, Montreaux and Baden each grossed over CHF 100 million. Grand Casino Basel booked almost CHF 95 million, and the remaining three “A” properties at Bern, Luzern and St. Gallen had results close to CHF 60 million, 49 million and 48 million respectively. They combined for a total GGR of over CHF 563 million and contributed almost CHF 301 million directly to the national pension fund.

Surprisingly, though, the highest grossing casino in all of Switzerland is the “B” licensed Casino Admiral Mendrisio. In 2006 the operation grossed almost CHF 133 million and had the accompanying honor of paying the nation’s highest tax rate for the year, just over 61 percent. Altogether, “B” casinos contributed over CHF 392 million to total GGR in and almost CHF 195 million in tax.

The Mendrisio property is situated just a few kilometers from the border with Italy and is the first Swiss casino reached by Italians motoring up from Milan. Although only allowed to offer three types of table games-Mendrisio chose roulette, blackjack and punto banco from the menu-their popularity with Italian guests inspired management to increase the number of tables from the original 24 to 31. The casino, which is owned by Novomatic subsidiary ACE, is also the first to offer multi-game slots that incorporate a recently allowed multi-level jackpot system. Previously, only “A” casinos were allowed to offer multi-level jackpots.

The near future will bring some of the same new challenges that other jurisdictions are undergoing. Smoking, or the banning of smoking, is beginning to become an issue as more local governments institute their own individual regulations. The market is also believed to be reaching its limits, with predictions of a slight reduction in GGR for 2008, around 3 percent. If that is the case, then all the prep work done by Swiss gaming authorities just might have resulted in getting the numbers right. For the moment.