How land-based casinos have benefited from iGaming 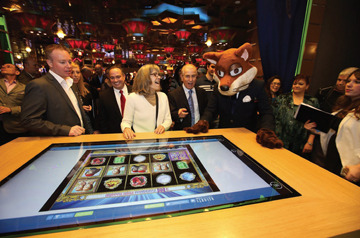 After hitting rock bottom on April 15, 2011, the United States online gaming industry has risen from the ashes, and has done so with the assistance of a very unlikely ally—brick-and-mortar casinos.

After years of fighting and casting aspersions on one another, the entrenched brick-and-mortar and online gaming industries have not only learned to cohabitate, they are now collaborating in ways neither could have imagined just five years ago. The antagonists have become compatriots, and both sides have benefited.

After three years of legal online gambling in Nevada, New Jersey and Delaware, the longstanding cannibalization fears harbored by the brick-and-mortar casino industry have proven false. In fact, not only were these fears misplaced, they were 180 degrees off from reality.

Far from being cannibalistic, the legal online gambling structure that has been installed in three U.S. states, with existing land-based casinos acting as the licensed operators and partnering with online gaming companies, has proven to be extremely beneficial for everyone involved.

The two industries have united, and their newfound symbiotic relationship has led to the former rivals entering a brave new world and uncovering a slew of new possibilities in the process.

The struggles of Atlantic City’s casino industry have been well documented over the past half-decade. Four of the city’s 12 casino properties shuttered their doors in 2014, and analysts are warning more contraction could be on the horizon should New Jersey pass a referendum that would expand casino gambling beyond the borders of Atlantic City this November.

The city’s casinos have also seen gambling revenue plummet since the industry hit its historical high-water mark in 2006, when Atlantic City casinos generated over $5.2 billion in collective revenue. In 2015, Atlantic City’s eight remaining casinos posted gross gaming revenue of just $2.5 billion, less than half of their 2006 haul.

That being said, it could have been worse. A lot worse.

Percentage of total revenue from online gaming in 2014:

Percentage of total revenue from online gaming in 2015:

In 2015, online gambling accounted for over 6 percent of all gaming revenue in Atlantic City, and is on pace to better that in 2016. And who knows where the likes of Tropicana and Golden Nugget would be without online gambling, as iGaming accounts for over 10 percent of total revenue at both properties.

And the benefits of online gambling go far beyond additional revenue. Revenue is merely the tip of the iceberg.

During a public policy hearing in front of the Pennsylvania legislature in the spring of 2014, not long after the launch of New Jersey’s online gambling sites, David Satz, the senior vice president of government relations and development for Caesars Entertainment Corp., shocked the gaming industry when he stated that 91 percent of the company’s online signups in New Jersey were new to Caesars’ database.

This number has fallen off since Satz’s testimony in early 2014, but the percentage was still 80 percent as late as April 2015, according to testimony by the senior vice president and general counsel of Caesars Interactive, Michael Cohen, at a hearing in front of Pennsylvania legislature.

“The practical effect that we have seen is it has not cannibalized our business,” Cohen told the Pennsylvania legislature. “If anything, it has enhanced our bricks-and-mortar business.”

And Caesars is not alone.

In 2015, the Tropicana reported that 60 percent of its online casino players are new customers.

Even the second wave of online operators has seen player databases swelled by online gambling. As of May 2016, a full 52 percent of Resorts Casino’s online registrants are new to the database, and an additional 9 percent have been inactive for at least two years.

This phenomenon isn’t exclusive to New Jersey. Dover Downs Hotel & Casino in Delaware has had similar experiences with online gambling. “Our analysis shows 53 percent of the people who’ve signed up online were already our customers,” says Ed Sutor, president and CEO of Dover Downs. While it’s not as robust as New Jersey’s numbers, as Sutor notes, “Almost 50 percent of the people signing up were not here before.”

Once a player is in the casino’s database, they can then fill out that player’s profile, based on their live and online play, and create customized marketing and promotional offers.

As Sutor notes, a lot of this has to do with how rewards are structured, and how effectively you can market to these online players. Sutor is of the opinion that online players quickly learn that to get the best goodies, they need to registered in the brick-and-mortar VIP clubs and play online and live.

During his 2015 testimony in front of the Pennsylvania House Gaming Oversight Committee, Cohen confirmed this belief with real-world numbers, noting that 15 percent of the online players new to the Caesars database subsequently visited one of the company’s brick-and-mortar casinos. Essentially, online gambling allowed Caesars to identify potential customers and tailor marketing efforts to these players, resulting in 15 percent becoming brick-and-mortar customers.

“Our demographic is different than the bricks-and-mortar demographic,” Amaya Vice President of Corporate Communications Eric Hollreiser says. “Partners like Resorts see promotional value and foot-traffic value reaching a new audience, even if that audience is already in their backyard.”

A Foot In The Door and More

While a lot is made of iGaming’s positive impact on brick-and-mortar properties, far less attention is paid to how this door swings in the opposite direction.

For the online gaming companies that have set up shop in the U.S., the benefits appear obvious, as partnering with brick-and-mortar properties in the legal online gaming markets has given them the opportunity to operate in the United States. The proverbial foot in the door. “That’s the way in,” Hollreiser says. “You can only do it if you’re teamed with a licensed ground operator.”

For an online gaming platform provider, having a committed brick-and-mortar partner, whose interests are now tied to your own successes, has opened up a slew of marketing possibilities. It’s no longer necessary to search out the best venue to host a poker tournament, or locate a willing land-based partner to help you run a promotion. These relationships are now built into the industry model, and they are paying off in spades, as both the online operator and the brick-and-mortar property have skin in the game.

As Hollreiser notes, “There’s much greater synergy and partnership value when you have that existing long-term commercial relationship, as we do with Resorts.”

One example of this was the recent “Run It Up: Resorts Rumble” that Resorts and PokerStars hosted in May.

The event saw PokerStars, Resorts and a cadre of Team PokerStars Pros host a daylong festival featuring meet-and-greets, online poker tournaments, and an exclusive party at the Land Shark Bar and Grill for a nominal donation to the Autism Speaks charity. Resorts President and CEO Mark Giannantonio says the total donation to Autism Speaks from the event was $100,000, and how well run the event was.

“They work really well with my team here, and these types of events aren’t the easiest things to put on,” Giannantonio says.

A lot of that has to do with teamwork, and having a committed partner. Quite frankly, an event of this nature is harder to pull off when the host casino is merely renting out the space, as it requires a tremendous amount of trust—trust that must be earned and built up over the years. “We’ve been working with Resorts for several years, and built up a good working relationship, so we have confidence in what each of us can bring to the table,” Hollreiser says.

Run It Up: Resorts Rumble ticked off all the boxes. It increased foot traffic, received good press for its charitable contribution, and increased brand awareness and loyalty for PokerStars in New Jersey and Resorts Casino. “It very much fulfills the initial vision that we can drive brick-and-mortar via online,” Hollreiser says.

The proof is in the pudding. “We brought a couple hundred people to Atlantic City on a May weekend,” Hollreiser says.

The event also helped christen a new conference center at Resorts, but this could just be the beginning. Both Resorts and PokerStars are still optimistic that a PokerStars-branded brick-and-mortar poker room could be in the cards, and Giannantonio intimates a much larger event is being planned for November, where upwards of 1,000 people might be attending.

If Run It Up: Resorts Rumble was a trial run for a larger-scale event, it passed with flying colors.

Resorts has been perhaps the most aggressive online gaming operator in the U.S. up to this point.

With these strong partners Amaya/PokerStars and NYX Gaming, Resorts has gone above and beyond. In April 2015 the casino launched an iGaming Lounge, a small designated area on the casino floor where visitors can go and hang out and learn about the company’s online gambling products from Resorts employees, and even register online accounts on the spot.

“We wanted to create something like an Apple Store, so our brick-and-mortar customers can go in there and learn firsthand about online gambling, so when they return to their home they’re more apt to play at ResortsCasino.com or MoheganSun.com,” says Giannantonio.

But the synergies, and collaborative efforts between online and brick-and-mortar, are seen throughout the legal iGaming markets.

“We’ve held tournaments specifically for online poker players,” says Sutor, who notes that the tournaments are held once a quarter, or thereabouts, and give Dover Downs the opportunity to expose the property to new customers, many of whom have never set foot in any casino.

Sutor also indicates that Dover Downs Casino’s marketing department has weekly conference calls with the other racinos and 888. Instead of trial by fire, Dover Downs is able to call upon 888’s experience in the online gaming market to help shape their promotions and offers.

When you step back and take a look at what is going on from 30,000 feet, you start to see even more potential, and how these mutually beneficial partnerships can lead to more states passing online gambling legislation.

There is the potential for these partnerships to sow political value. The successes in New Jersey, and to a lesser extent in Nevada and Delaware, demonstrate the potential benefits to brick-and-mortar operators in other states that may be on the fence when it comes to online gambling, perhaps still clinging to the now-debunked fears of cannibalization.

In effect, online operators have the chance to benefit through future expansion when potential stakeholders in other states see the benefits they’ve brought to their existing partners.