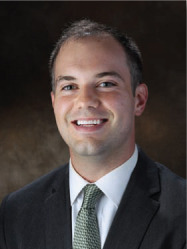 Chris Calitri was born and raised in Lexington, Kentucky, and went to school at what he described as the “best private liberal arts college” in the state, Centre College in Danville. While there, Calitri earned a bachelor of arts in computer science and German.

Like most kids growing up in Kentucky, Calitri recalls horse racing being an integral part of life from early on. So naturally, fresh out of college, Calitri was wagering that his professional experience and IT skills could land him a job at Churchill Downs, home of the Kentucky Derby.

Calitri’s perseverance paid off as he was accepted into the company’s newly created Management Rotation Program. However, there was one catch. This position would place him at one of the nation’s oldest tracks, the Fair Grounds Race Course in New Orleans—not at the beloved Churchill Downs track in Louisville. In a decisive career move, Calitri packed up his belongings and never looked back.

Six years later, Calitri credits his success with the company back to his start in the Management Rotation Program. When he arrived at Fair Grounds, he describes himself as a quick learner that was “not afraid to fail.” The program exposed him to a new department at the track every two to three months, where he eventually met his friend and mentor Duncan McConnell, then senior director of slots.

Surprisingly, Calitri found his niche in the world of slots, and jumped at the opportunity when a permanent position became available in that department.

Calitri is now the slots manager at Fair Grounds, and truly enjoys his work. The position enables him to be present on the slot floor, which allows him to have intimate knowledge of the products he is offering, in addition to engaging with consumers. Even though

McConnell is now senior director of slot strategy and performance at Churchill Downs’ corporate office, Calitri is able to work with him on a regular basis and continues to learn about leadership from his example.

When looking back on his career, Calitri says he is most thankful for his committed staff, and proud of their everyday accomplishments as a team. These serve as a constant reminder to simply appreciate a job well done, even the seemingly small and mundane tasks.

Calitri admits the best part of his job is being at Fair Grounds during one of their many annual events. Thanksgiving marks the official start of the racing season, and the holiday outing has long been a tradition in New Orleans, with approximately 7,000 in attendance and growing. Each spring the Fair Grounds also hosts the city’s 10-day Jazz and Heritage Festival, drawing musical talent from across the nation and food vendors from around the city.

A company man, Calitri hopes to stay with Churchill Downs for the remainder of his career. Perhaps it is part nostalgia for the once-dominant American sporting event, but Calitri believes in the culture of this industry and the innovative minds at the helm of his company. Although Calitri cannot divulge too much information, he anticipates the arrival of new technology at the Fair Grounds that will enhance and revive the consumer experience at the races.

Calitri is honored to be recognized by his peers as one of GGB’s 40 Under 40 Emerging Leaders. When not enjoying one of the many annual festivals in New Orleans, you will find him devoting his time to coaching girls’ volleyball at the Bayou Sports Club in Mid-City.