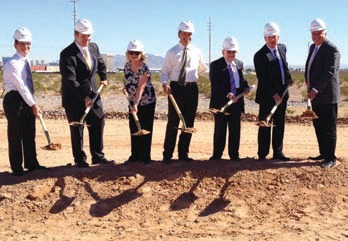 The two-story office, manufacturing and warehouse complex, on 23.7 acres near I-215, is slated to be complete in mid-2016. The design architect is KGA Architecture. The new facility will accommodate 300 employees and provide for future company growth. The project will create 125 direct and indirect construction jobs.

State and local dignitaries presented Ainsworth with various certificates of recognition during the ceremony. On awarding the Certificate of Congressional Recognition to Ainsworth, Heck praised the company for its commitment to employ local people at the facility.

Ainsworth, 91, the chairman and founder of Ainsworth Game Technologies and of Australia’s Aristocrat Leisure Ltd., has been involved in an effort to bring Ainsworth slots to the North American casino market.

“I’m proud to become a permanent part of the community,” Ainsworth told the gathered crowd. “I’ve been coming here since 1960, before many of you were born, and a time when gaming couldn’t even get bank loan. Since then, Nevada has led the way in establishing licensing procedures, keeping questionable people out of the business, and creating a respectable industry.

“I’m often asked about the future of gaming and slot machines. I always respond that the first slot machines appeared more than 110 years ago, and I suspect they will be around a lot longer.”