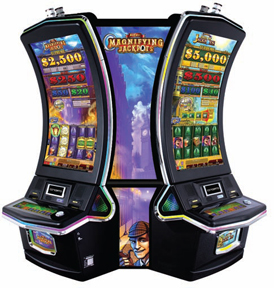 This new game is featured on Konami’s oversized Concerto Crescent cabinet, with its 43-inch curved vertical monitor, as well as the Concerto Stack, which has a 43-inch flat monitor.

The base game is a five-reel, nine-line video slot including several innovative primary-game and bonus features, as well as a four-level stand-alone progressive jackpot. The primary game features Konami’s “Strike Zone” feature, which randomly chooses a special area on the reel array in which special features including wild symbols, multipliers and mini-wheel-spin bonuses are activated. The larger the bet, the wider the Strike Zone, beginning with two reel positions at minimum bet and rising to a three-by-four box in the center of the screen at max bet.

If the spin results in a full screen of wild symbols, the player is awarded an extra 2,000 credits times the bet, in addition to all the associated line pays.

In another feature encouraging higher wagers, the top Supreme Jackpot is activated with a bet of 200 credits.

Also in the base game, each reel contains a number of positions that are randomly replaced with one of the three lower jackpot symbols, Maxi, Major or Mini, before the spin is initiated. Five Maxi, Major or Mini symbols on a pay line returns the corresponding jackpot, and multiple jackpots can be won on the same spin.

The Supreme Jackpot is awarded when five of any of the like jackpot symbols appear on the first reel with the second through fifth reels covered with wild symbols. The award resets at 25,000 times the denomination, or $2,500 in the penny version of the game.

There also is a free-game bonus. Three, four or five street lamp symbols trigger eight, 12 or 20 free games, respectively. According to the manufacturer, the chance at jackpots increases during the free spins.